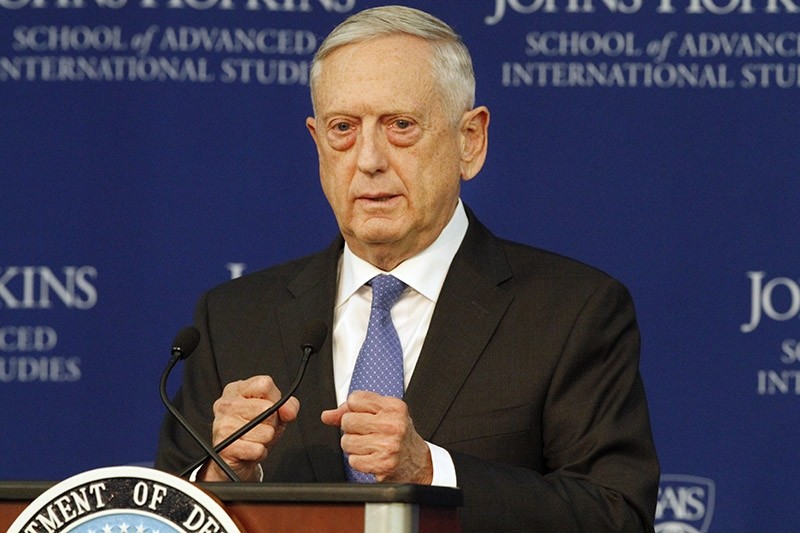 A new national defense strategy says that competition with China and Russia has threatened America's military advantage around the world. And it will require increased investment to make U.S. forces more lethal, agile and ready for war.

"We will continue to prosecute the campaign against terrorists, but great power competition -- not terrorism -- is now the primary focus of U.S. national security," Defense Secretary Jim Mattis said in prepared remarks at the Johns Hopkins School of Advanced International Studies in Washington.

He declared the defeat of the Islamic State group's "physical caliphate" in Iraq and Syria, but warned that IS, al-Qaida and other extremists continue as threats across the globe.

The document reflects persistent U.S. worries about China's military build-up in the South China Sea, its moves to expand its political and economic influence around the globe, and what has long been described as Beijing's systematic campaign of cyberattacks and data theft from government agencies and private U.S. corporations.

And it underscores American concerns about Russia's aggressive military moves, including the invasion of Ukraine and involvement in the Syria war, as well as its meddling in the 2016 election.

Pentagon officials released an 11-page unclassified version of the strategy on Friday, saying it mapped out a "fundamental shift" in focus for the military.

"We've been doing a lot of things in the last 25 years, and we've been focused on really other problems and this strategy really represents a fundamental shift to say, look, we have to get back, in a sense, to basics of the potential for war," said Elbridge Colby, the deputy assistant defense secretary for strategy. "This strategy says the focus will be on prioritizing preparedness for war and particularly major power war."

Previous defense chiefs have long warned about a rising China -- triggering the Obama administration's move to put a greater focus on the Asia Pacific region, including added ships and troops. And the new strategy's call for strengthening alliances sounds more like previous administrations, rather than the "America First" message of President Donald Trump's national security strategy that was released in December.

The Pentagon document says that allies and partners are crucial and can provide additional capabilities and access to other regions.

"This is not 1999, when some would say the U.S. can do everything by itself," said Colby. "There is a practical reality that we need to be able to do things together, to be more interoperable, to be able to divide up missions in a constructive way."

Asked if terrorism is no longer a top priority, Colby said it remains a "serious, pressing threat", and that Iran and North Korea are "urgent problems." But, he said that the central challenge for the U.S. military is "the erosion of U.S. military advantage vis-a-vis China and Russia, which unaddressed could ultimately undermine our ability to deter aggression and coercion."

Colby, however, added that the U.S. continues to seek areas of cooperation with Russia and China, saying that "this is not a strategy of confrontation.'

The U.S. has been urging China to take a more active role in convincing North Korea to set aside its nuclear ambitions, and the U.S. has held talks with Russia to ensure there are no conflicts or accidents in the skies over Syria, where both nations are flying in the war against the Islamic State group.

In the strategy's conclusion, Mattis makes clear that his goal is to "pursue change at significant scale" with sustained investment and creative approaches. That plan, however, will face grim budget hurdles.

Congress has been deadlocked and unable to pass a spending bill, bringing the federal government once again to the brink of a shutdown at midnight Friday. And lawmakers are still constrained by the Budget Control Act of 2011, which put mandatory spending caps in place.

The Pentagon strategy acknowledges the budget limits, and calls for greater spending discipline and management, as well as a commitment to again seek more base closings to save money. Congress has repeatedly rejected additional base closings.