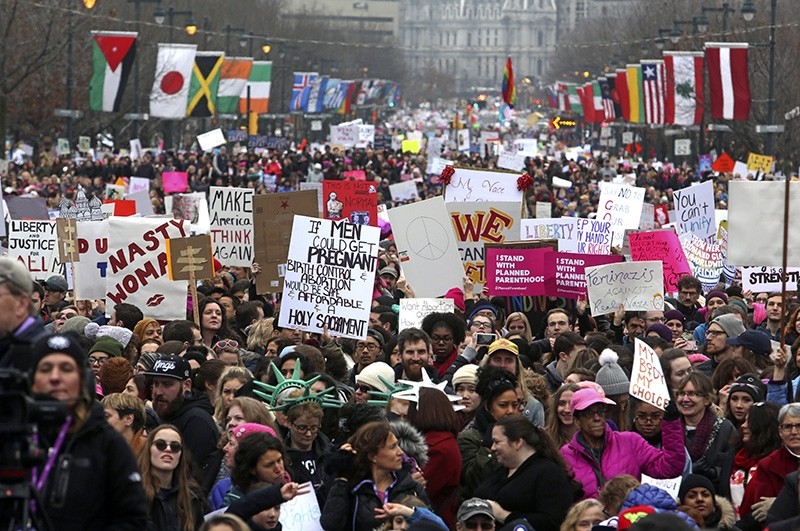 In this Jan. 21, 2017, file photo, thousands of protesters, on the day after Republican President Donald Trump's inauguration, participate in a women's march on the Benjamin Franklin Parkway in Philadelphia. (AP Photo)
by Jan 19, 2018 12:00 am

Giant crowds are expected at rallies around the United States Saturday for a second Women's March opposing President Donald Trump, and calling for voter mobilization ahead of the 2018 midterm elections.

On January 21, 2017, one day after Trump's inauguration, more than three million people marched nationwide opposing the president, according to a Washington Post estimate. The flagship rally was held in Washington, echoed in sister protests around the world.

The giant outpouring illustrated the depth of resistance to the Republican billionaire president, whose hardline policies have impacted the rights of women, immigrants and minorities. But the demonstrations were also criticized for being too white and liberal.

This year the spotlight will be in Las Vegas, Nevada, a state which in 2016 voted for Democratic nominee Hillary Clinton over Trump and elected the country's first Latina senator, Democrat Catherine Cortez Masto.

More than 300 towns and cities are organizing anniversary marches and rallies, not all of them affiliated to each other. In New York, 82,000 people have registered as "interested" in attending on the event's Facebook page.

"Power to the Polls"

The strapline for Las Vegas is "Power to the Polls," designed to drive national voter registration and maximize women's involvement in the 2018 midterm elections, in which a record number of women are standing for election.

Protesters are expected to denounce Trump's hardline immigration policies, promote women's rights, address the gender pay gap, concerns about health care and call for the removal of barriers to voting by marginalized communities.

"In 2018, we must turn our work into action ahead of the midterms. This new initiative will address voter registration and voter suppression head on," says Tamika Mallory, co-president of Women's March.

Las Vegas, which in October was the scene of the deadliest mass shooting in modern U.S. history, has been rocked by sexual assault allegations against elected officials and is considered a battleground state that will shape the U.S. Senate in 2018.

"As a swing-state that will shape the Senate in 2018 and as home to a strong activist network, Nevada is the perfect place to commemorate the Women's March and continue building our electoral power," wrote organizers on the event's Facebook page.

Last year, a sea of demonstrators brought downtown Washington to a standstill, in a parade of knitted, pink "pussy hats," an allusion to Trump's videotaped boasts of being able to grope women with impunity.