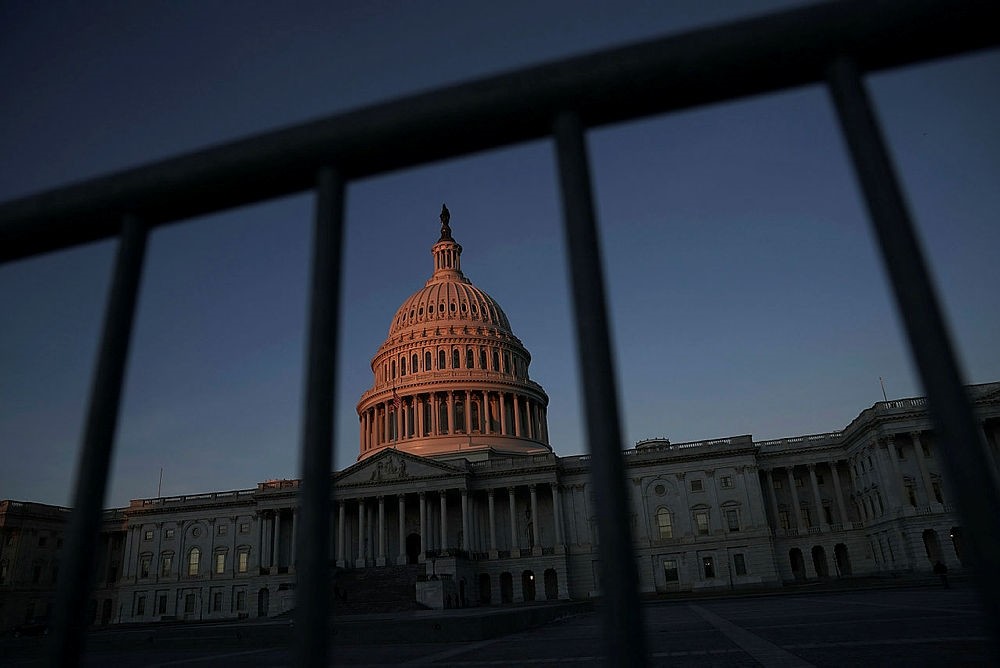 U.S. Senate leaders offered no obvious solution to reopening the government and engaged in unrelenting finger-pointing during a rare Sunday session in the hours leading up to a vote to end the shutdown before the workweek began.

The chamber's top Democrat indicated that he would continue to lead a filibuster of a stopgap spending measure that's slated for a post-midnight vote, while congressional Republicans appeared content to let the pressure continue to build on the second day of the government shutdown.

Senate Democrats blocked the temporary governmentwide funding bill Friday night, demanding progress on legislation to protect about 700,000 so-called Dreamer immigrants who were brought illegally to the country as children.

"I think they miscalculated on the shutdown. It's very unpopular, and they're trying to find a way out of it," said Senate GOP Whip John Cornyn of Texas.

Restive moderates in both parties convened in hopes of finding a way out of the shutdown mess, but for now there's no evidence of a breakthrough that could end the standoff. The looming vote will prove to be a test of unity among Democrats. Five Democrats from states won by President Donald Trump broke ranks in a vote on Friday.

The House convened as well and was on hold, waiting to see if its members would be needed to act just in case gridlock broke in the Senate.

Democratic lawmakers challenged the president to get more involved and to accept bipartisanship. They say Trump hurt negotiations by initially expressing support for a compromise in a Friday meeting with top Senate Democrat Chuck Schumer of New York and then abruptly turning it away.

"How can you negotiate with the president under those circumstances where he agrees face to face to move forward with a certain path and then within two hours calls back and pulls the plug?" said Sen. Dick Durbin, D-Ill., on ABC's "This Week."

Four Republicans opposed the House-passed plan Friday night. The measure gained 50 votes to proceed to 49 against, but 60 were needed to break a Democratic filibuster.

Lawmakers are participating in rare weekend proceedings in both the House and Senate, where lawmakers were eager to show voters they were actively working for a solution — or at least actively making their case for why the other party was at fault. The scene highlighted the political stakes for both parties in an election-year shutdown whose consequences are far from clear.

Democrats refused to provide the votes needed to reopen the government until they strike a deal with Trump protecting young immigrants from deportation, providing disaster relief and boosting spending for opioid treatment and other domestic programs.

The shutdown began Saturday on the anniversary of Trump's inauguration. As lawmakers bickered in the Capitol, protesters marched outside in a reprise of the women's march from a year ago. The president remained out of sight and canceled plans to travel to his resort in Florida for the weekend. He did tweet, making light of the timing by saying Democrats "wanted to give me a nice present" to mark the start of his second year in office.

And he resumed his social media commentary early Sunday, tweeting that it was "Great to see how hard Republicans are fighting for our Military and Safety at the Border. The Dems just want illegal immigrants to pour into our nation unchecked." He suggested that if the stalemate drags on, majority Republicans should consider changing Senate rules to do away with the 60-vote threshold to advance legislation and "vote on real, long term budget."

Republicans blamed the breakdown on Schumer, the Senate minority leader. Democrats increasingly focused their messaging on criticizing Trump, whose popularity is dismal. Democrats were using his zigzagging stance in immigration talks — first encouraging deals, then rejecting them — to underscore his first, chaotic year in office.

"People from one end of the country to the other know it's the Trump shutdown, and they know why," Schumer said Sunday. "It's a direct result of a president who has proven unwilling to compromise and is thus unable to govern."

Republicans seemed content to hope more Democrats will break as pressure builds and the impact of the shutdown becomes clearer. GOP lawmakers argued that Democrats were blocking extra Pentagon money by keeping the government closed and thwarting a long-term budget deal.

"Bipartisan, bicameral negotiations have been underway for months. But they can go nowhere until Senate Democrats realize that the extreme path their leader has charted leads them nowhere," said Senate Majority Leader Mitch McConnell, R-Ky.

Some sites were closed, including Philadelphia's Liberty Bell, but visitors had access to other sites such as Yellowstone. Democratic Gov. Andrew Cuomo of New York said the Statue of Liberty and Ellis Island would be open for visitors Monday, with the state picking up the tab for federal workers for the duration of the government shutdown.

Social Security and most other safety-net programs were unaffected by the lapse in federal spending authority. Critical government functions continued, with uniformed service members, health inspectors and law enforcement officers set to work without pay.

White House budget director Mick Mulvaney said that if the shutdown continues into Monday, there would be three categories of federal employees affected: those who will continue to come to work, another group that will come to work for about four hours "to help shut things down" and those who will not come to work at all.

"But most Americans won't see a difference," Mulvaney said on "Fox News Sunday."

Democrats have been seeking a deal to protect the "Dreamers," who have been shielded against deportation by the Deferred Action for Childhood Arrivals program, or DACA, which Trump halted last year. He's given lawmakers until early March to pass legislation restoring the protections, but he's demanded added money for his proposed border wall with Mexico as a price.