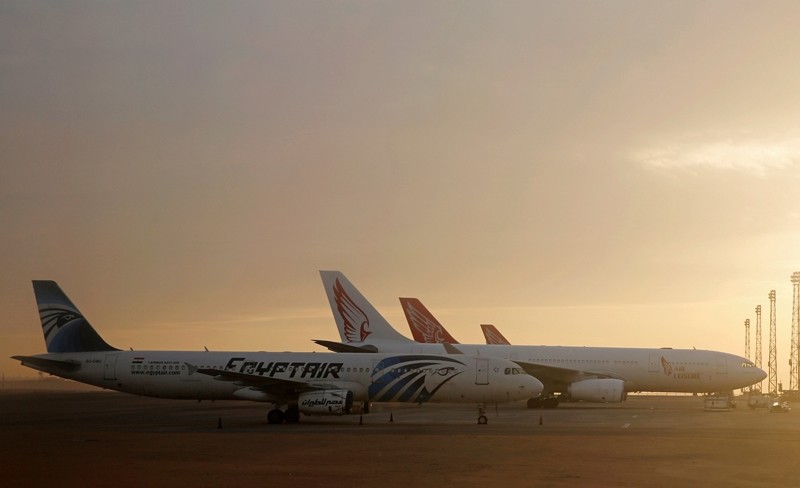 An EgyptAir plane is parked next to other planes on the runway of the Cairo International Airport, pictured through the window of an Etihad Airways plane in Egypt December 16, 2017 (Reuters File Photo)
by Compiled from Wire Services Jan 22, 2018 12:00 am

The Transportation Security Administration order is aimed at preventing terrorist attacks in response to "persistent threats to aviation," TSA said in a statement. The countries falling under this order are Egypt, Jordan, Saudi Arabia, Qatar and United Arab Emirates.

The countries were chosen because of "demonstrated intent by terrorists groups to attack aviation from them," the statement said.

TSA said most of the requirements of the emergency order are already being carried out voluntarily by airlines in some countries, but didn't identify the countries.

Airlines that TSA said are affected by the order are EgyptAir, Royal Jordanian, Saudia, Qatar Airways, Emirates and Etihad, although EgyptAir no longer accepts cargo shipments on flights to the U.S. at the request of American authorities.

They are now required to comply with what is known as Air Cargo Advance Screening (ACAS) protocols, a typically voluntary program that requires airliners to disclose information about cargo they plan to bring to the U.S.

Carriers will be required to give background information on the packages they are carrying, such as who sent it, where from and details about its contents.

"We haven't necessarily seen anything 'brand new' in terms of a new threat but we are seeing things and want to stay ahead of the threat that we've seen over the past nine months or so. There's enough out there, enough threat streams, that give us enough concern that we need to move forward with this as quickly as possible," a TSA official told CBS.

Turkey is the only other country required to participate in ACAS, CBS reported, noting the Trump administration may widen the regulations to affect all air cargo bound for the U.S.