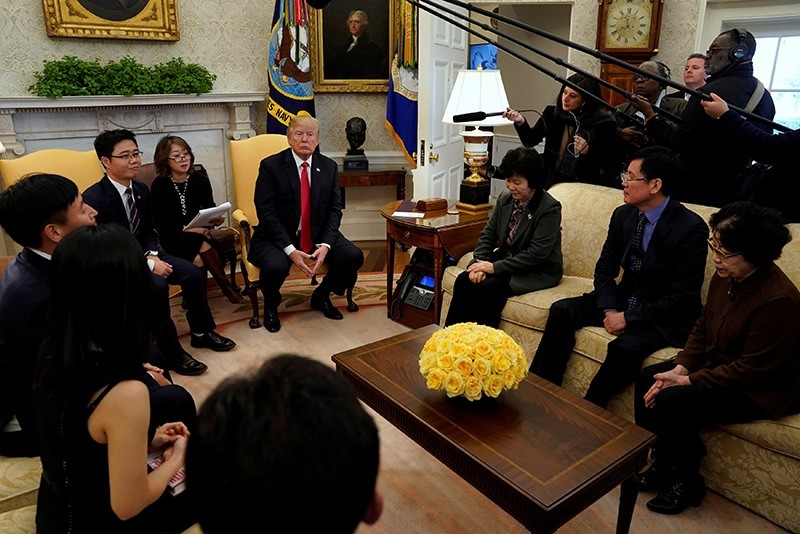 The group -- whose stories Trump described as "incredible and truly inspirational" -- included a banker with knowledge of the regime's overseas operations, a former political prisoner and amputee Ji Seong-ho.

Seong-ho escaped from North Korea in 2006 and was given a place of honor just seats away from First Lady Melania Trump at Tuesday's State of the Union address.

Since coming to office Trump has made a series of bellicose remarks on North Korea and vowed to never let Pyongyang develop nuclear weapons that could hit the continental United States.

But his embrace of North Korean defectors could enrage the regime as much as any verbal barbs.

The meeting comes at a particularly sensitive time, as the Winter Olympics are about to get underway in South Korea.

North Korean leader Kim Jong Un -- who Trump has dismissively dubbed "rocket man" -- has so far pressed ahead with weapons programs and shows little sign of backing down.

Trump has pushed for an oil embargo against North Korea, a measure that could significantly dent the country's military operations and the broader economy.

But, according to diplomats, that effort has run into opposition from Chinese leader Xi Jinping, who believes it could cause the country's collapse.

Trump addressed the standoff in separate calls with the leaders of Japan and South Korea on Friday.

In a call with Japan's Shinzo Abe, the White House said both leaders agreed to "intensify the international maximum pressure campaign to denuclearize North Korea."

In his call with South Korean President Moon Jae-in, Trump wished "him and the Korean people a successful Winter Olympic Games."