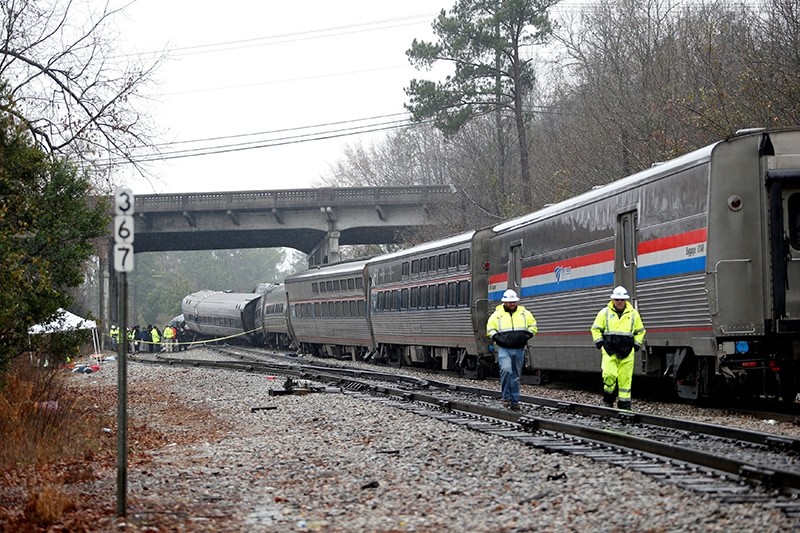 Emergency responders are at the scene after an Amtrak passenger train collided with a freight train and derailed in Cayce, South Carolina, U.S., Feb. 4, 2018. (Reuters Photo)
by Daily Sabah with Wires Feb 04, 2018 12:00 am

An Amtrak train operating between New York and Miami collided with a CSX freight train in South Carolina on Sunday, killing two Amtrak crew members and injuring 116 others.

The Silver Star was on its way from New York to Miami with nearly 150 people aboard around 2:45 a.m. when it plowed into the CSX train at an estimated 59 mph, Gov. Henry McMaster said. The crash happened around a switchyard about 10 miles (16 kilometers) south of Columbia.

The governor said investigators have yet to determine how the Amtrak train ended up on that stretch of track.

"The CSX was on the track it was supposed to be on," McMaster said.

The National Transportation Safety Board sent investigators to the scene.

In an emailed statement, Amtrak said that it was "deeply saddened" by the deaths and that it was cooperating fully with the NTSB. It did not address the cause of the crash but said CSX maintains all of the tracks and signal systems where the accident happened and controls access to the sidings and yards.

CSX did not immediately return an email and telephone call.

The conductor and engineer aboard the Amtrak locomotive were killed, the coroner's office said. And 116 people were taken to four hospitals, according to the governor.

The crash comes days after another Amtrak train carrying Republican U.S. lawmakers collided with a garbage truck in West Virginia, killing one person.

In December, an Amtrak train hurtled off an overpass south of Seattle and spilled some of its cars onto the highway below, killing at least three people, injuring dozens and crushing two vehicles.