Trump 'totally opposed' to domestic violence and 'everybody knows that' 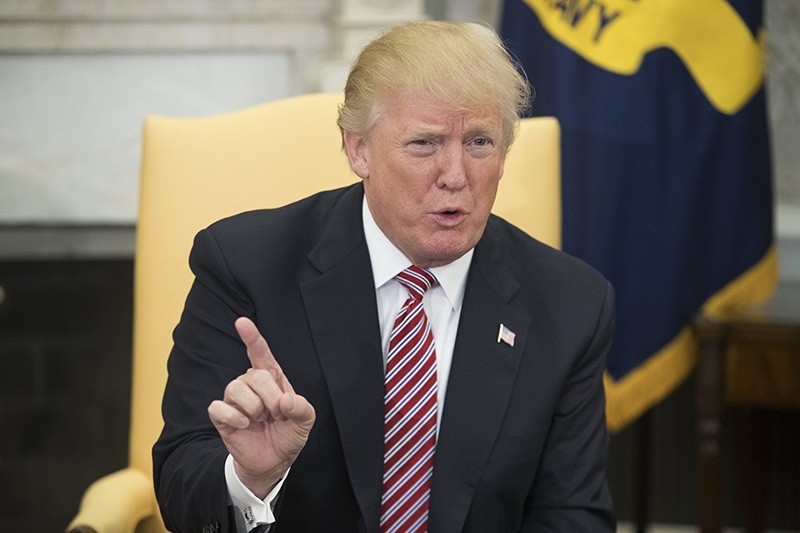 U.S. President Donald J. Trump speaks on domestic violence during a meeting on taxes, in the Oval Office of the White House in Washington, DC, USA, 14 February 2018. (EPA Photo)
by Compiled from Wire Services Feb 14, 2018 12:00 am

U.S. President Donald Trump on Wednesday voiced his disdain for domestic violence, breaking a week-long silence since the departure of a top aide accused by two ex-wives of physical abuse.

"I'm totally opposed to domestic violence and everybody here knows that," Trump told journalists in the Oval Office.

"I'm totally opposed to domestic violence of any kind. Everyone knows that and it almost wouldn't have to be said. So now you hear it, but you all know."

Trump had praised Rob Porter, the former staff secretary, Friday, and on Saturday appeared to cast doubt on the allegations on Twitter when he tweeted: "Peoples (sic) lives are being shattered and destroyed by a mere allegation."

The White House's handling of the Porter situation has ensnared senior West Wing officials, calling into question the decision-making and candor of chief of staff John Kelly and White House counsel Don McGahn.

One source said Trump has talked privately about replacing Kelly. A variety of names has been making the rounds as potential replacements, such as top White House economic adviser Gary Cohn, the source said.

Porter had been operating under a temporary clearance that have him access to some sensitive information without a final clearance. The White House has not offered a definitive explanation of when top officials first got word of problems in Porter's background.

The White House has said that Kelly asked Porter to resign when he became "fully aware" of the accusations last Wednesday, the same day the Daily Mail published photos showing one of Porter's former wives with a black eye.

The scandals follow months of allegations by women about sexual harassment or abuse at the hands of powerful men in entertainment, business and politics.

More than a dozen women have accused Trump of making unwanted sexual advances against them in the years before he entered politics. Trump has denied the accusations and has accused Democrats and the news media of orchestrating a smear campaign.