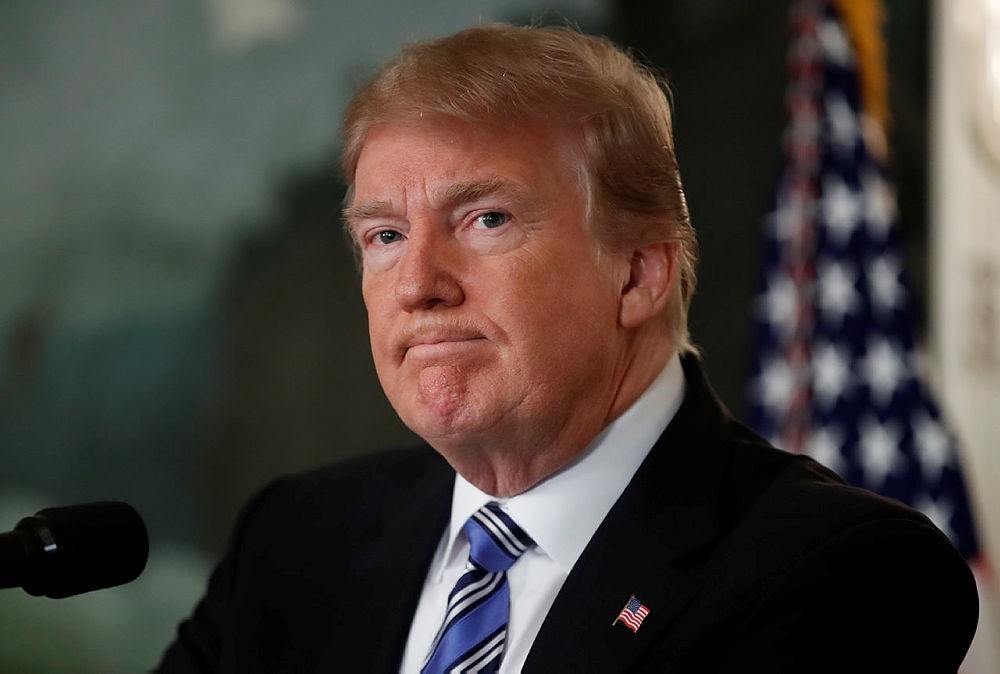 President Donald Trump pauses as he arrives to speak about the mass shooting at a South Florida High School from the White House, Thursday, Feb. 15, 2018, in Washington. (AP Photo)
by Compiled from Wire Services Feb 16, 2018 12:00 am

Declaring the nation united and grieving with "one heavy heart," President Donald Trump has once again promised to tackle school safety and "the difficult issue of mental health" in response to another deadly shooting in Florida. He made no mention of the scourge of gun violence.

Not always a natural in the role of national comforter, Trump spoke deliberately Thursday, at one point directly addressing children who may feel "lost, alone, confused or even scared."

"I want you to know that you are never alone and you never will be," Trump said. "You have people who care about you, who love you, and who will do anything at all to protect you."

While Trump stressed the importance of mental health and school safety improvements, his latest budget request would slash Medicaid, the major source of federal funding for treating mental health problems, and cut school safety programs by more than a third. Last year, he signed a resolution blocking an Obama-era rule designed to keep guns out of the hands of certain mentally disabled people.

The president spoke to the nation from the White House, one day after a former student with an AR-15 rifle opened fire at a high school in Parkland, Florida, killing 17 people and injuring 14 more. It was the nation's deadliest school shooting since a gunman attacked an elementary school in Newtown, Connecticut, more than five years ago.

Trump's silence on guns was noted with displeasure by many who are seeking tougher firearm restrictions.

Before he was a candidate, Trump at one point favored some tighter gun regulations. But he embraced gun rights as a candidate, and the National Rifle Association spent $30 million in support of his campaign

During his brief, televised statement, Trump said he wanted to work to "create a culture in our country that embraces the dignity of life," a phrase likely to resonate with his conservative base.

He pledged to work with state and local officials to "help secure our schools and tackle the difficult issue of mental health," adding that safe schools would be a key focus when he meets with governors and state attorneys general later this month.

Trump made no specific policy recommendations, and he did not answer shouted questions about guns as he exited the room.

In contrast, former President Barack Obama tweeted out a call for "long overdue, common-sense gun safety laws." Obama wrote: "We are grieving with Parkland. But we are not powerless. Caring for our kids is our first job."

In reacting to previous mass shootings, Trump has largely focused on mental health as a cause, dismissing questions about gun control. After a shooting at a Texas church in November left more than two dozen dead, the president said, "This isn't a guns situation."

How Trump has responded to moments of national grief

While Trump has offered somber responses to some tragedies, he has also drawn criticism for other reactions. He has responded in uneven ways to mass shootings and other incidents in which multiple people were killed.

Here's a look at Trump's reactions:

— February 2018, Parkland, Florida, high school shooting: Trump promised the nation he would "tackle the difficult issue of mental health." He did not mention gun control. In a morning tweet, Trump said there were many signs that the 19-year-old alleged shooter was "mentally disturbed."

— November 2017, Sutherland Springs, Texas, church shooting; 26 killed, including the unborn baby of one of the slain women: Trump said "this isn't a guns situation."

— October 2017, Las Vegas shooting kills 58 people: Trump called the shooter "demented" and a "very sick individual." He said "we'll be talking about gun laws as time goes by" but those conversations haven't happened. The administration had shown a willingness to outlaw the device the shooter used to fire at near-automatic rates, but the White House has proposed no curbs.

— October 2017, New York City truck attack kills eight: Within hours of the attack, Trump called on Congress to immediately repeal a diversity lottery program that allowed the suspect, Uzbekistan citizen Sayfullo Saipov, to enter the U.S. in 2010. Trump also called for the death penalty for Saipov.

— August 2017, In the aftermath of last August's white nationalist rally in Charlottesville, Va., Trump was criticized for saying that both white nationalists and counter-protesters were responsible for the violent clashes at the ally in Virginia.

— June 2017, Alexandria, Virginia, shooting gravely wounds House Majority Whip Steve Scalise, R-La., and other House Republicans at baseball practice: Trump addressed the nation from the Diplomatic Reception Room — the same setting as Thursday's address — and told Scalise that America was praying for him and all of the shooting victims. Trump also visited Scalise in the hospital.

— June 2016, Orlando, Florida, shooting kills 49 people: Trump sent multiple tweets: "Really bad shooting in Orlando. Police investigating possible terrorism. Many people dead and wounded" and "Appreciate the congrats for being right on radical Islamic terrorism, I don't want congrats, I want toughness & vigilance. We must be smart!" Trump also tweeted: "What has happened in Orlando is just the beginning. Our leadership is weak and ineffective. I called it and asked for the ban. Must be tough."

— December 2015, San Bernardino, California, shooting leaves 14 dead after a husband-and-wife duo open fire on a holiday party: Trump called for the "complete and total shutdown" of Muslims entering the U.S. Trump also tweeted: "The horrible shooting that took place in San Bernardino was an absolute act of terror that many people knew about. Why didn't they report?"

— December 2012, Newtown, Connecticut, elementary school shooting kills 26, including 20 first-graders: The following day, Trump tweets: "A horrible day for Newtown, CT and our country yesterday. My condolences to all of the families so tragically affected." Trump also tweeted after President Barack Obama spoke at a memorial service: "President Obama spoke for me and every American in his remarks in #Newtown Connecticut."