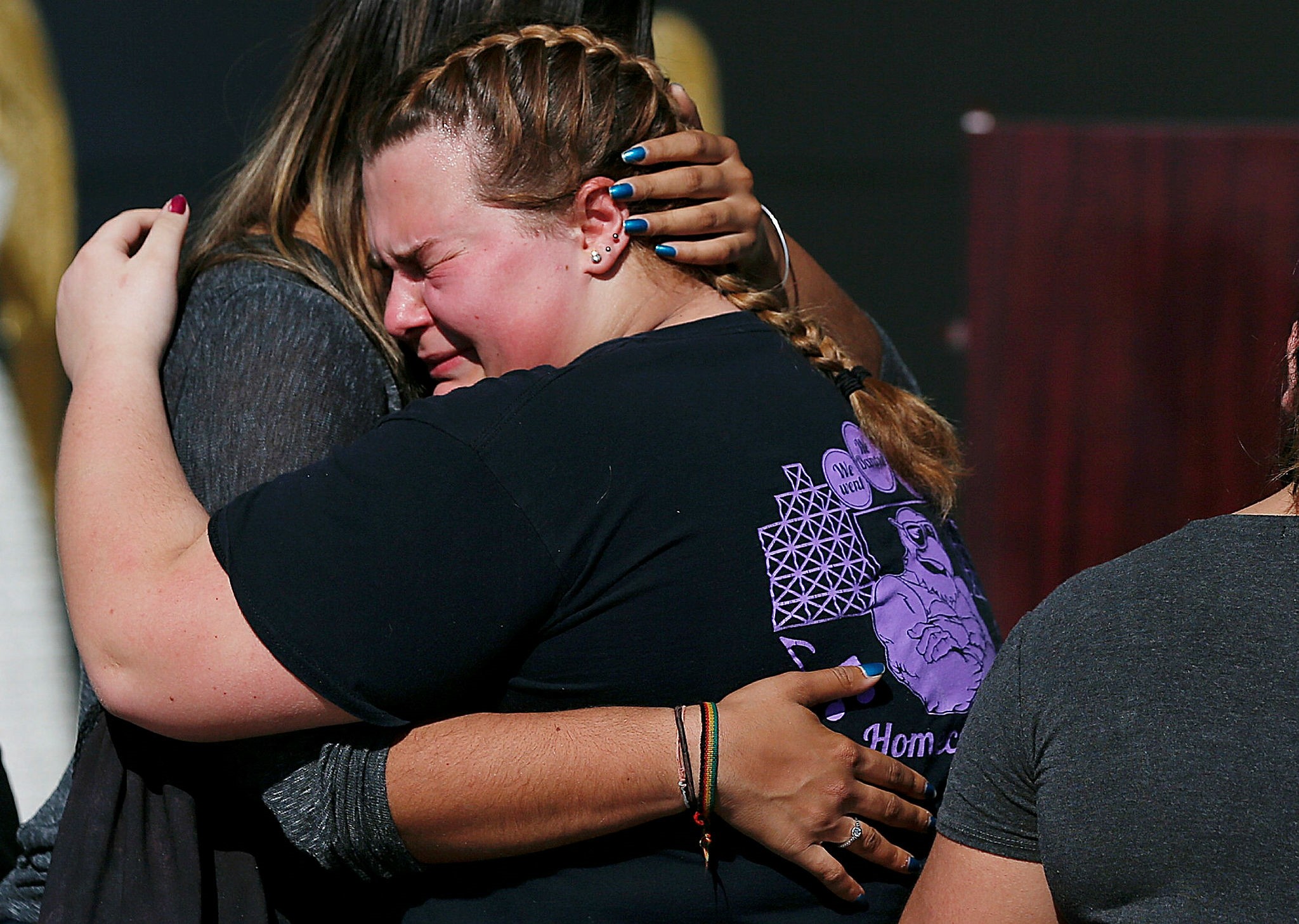 Kieran Ahearn, right, cries on the shoulder of her friend, Lara Bortolotti, left, during a community vigil at Pine Trails Park, Thursday, Feb. 15, 2018, in Parkland, for the victims of the shooting at Marjory Stoneman Douglas High School. (AP Photo)
by Feb 16, 2018 12:00 am

A troubled teen with alleged ties to a white supremacist group confessed Thursday to murdering 17 people at his former high school in Florida, as the FBI admitted it had received a tip-off about the 19-year-old gunman yet failed to stop him.

As Americans reeled from the country's worst school massacre since the horror at Sandy Hook six years ago, President Donald Trump suggested the root cause of the violence was a crisis of mental health -- and defied calls to address gun control.

Terrified students hid in closets and under desks on Wednesday at Marjory Stoneman Douglas High School in Parkland, texting for help as the gunman, Nikolas Cruz, stalked the school with a semi-automatic AR-15 rifle.

Cruz has been charged with 17 counts of premeditated murder, appearing Thursday afternoon before a judge who ordered him held without bond.

After being read his legal rights, "Cruz stated that he was the gunman who entered the school campus armed with a AR-15 and began shooting students that he saw in the hallways and on the school grounds," court documents showed.

Cruz also admitted he discarded his rifle -- which he bought legally in Florida -- and tactical gear in order to blend in with the crowd to flee the campus, the documents showed.

After the shooting, he stopped at a Wal-Mart store and then McDonald's, Broward County Sheriff Scott Israel told reporters. He was detained 40 minutes later, after police identified him using school security camera footage.

Expelled from school for disciplinary reasons, Cruz was known to be fixated on firearms -- and had reportedly been identified as a potential threat to his classmates.

In a somber televised address to the nation in response to the 18th school shooting so far this year, Trump vowed to make mental health a priority -- after tweeting about the "many signs" the gunman was "mentally disturbed" -- while avoiding any talk of gun curbs.

Earlier in the day, Trump had asserted that "neighbors and classmates knew he was a big problem. Must always report such instances to authorities, again and again!"

But US authorities themselves were under scrutiny, after the FBI confirmed it was alerted last September to a message posted on YouTube, in which a user named Nikolas Cruz vowed: "I'm going to be a professional school shooter."

In a statement, the FBI said it had carried out "database reviews and other checks" but was unable to identify the person who made the post.

But the information emerging since his attack suggests there were red flags that should have set off danger alerts.

"I met him last year, he was in my class at the beginning of the year and when I first met him, I knew that something was off about him and he was kind of weird," Manolo Alvarez, 17, told AFP.

Fellow students knew he posted violent messages online, and on Thursday the Anti-Defamation League reported he was a member of a white supremacist group and had taken part in military-style training exercises.

Jordan Jereb, believed to lead the shadowy Republic of Florida (ROF), however told the rights group that his organization had not supported Cruz's attack.

"Nobody I know told him to do that, he just freaked out," Jereb said in a separate interview with The Daily Beast, adding that Cruz "seemed like just a normal, disenfranchised, young white man."

"I don't know precisely what he believes," he said. "I know he knew full well he was joining a white separatist paramilitary proto-fascist organization."

Fifteen people were killed at the high school, and two later died in hospital.

One of those killed was Aaron Feis, a well-loved football coach in Parkland, a city of about 30,000 people located north of Miami where Trump was due to travel to meet the shocked community.

Two of the wounded remained hospitalized in critical but stable condition, while six others were on the way to a full recovery, officials told a news conference.

The school shootings are part of a broader epidemic of gun violence in a country that loses 33,000 people to gun-related deaths each year, two-thirds of them suicides.

Opponents of gun curbs have sought to steer public debate onto the motives -- and mental health -- of people using the weapons.

Former Democratic president Barack Obama issued a new appeal for action Thursday, insisting "we have to change" and calling for "long overdue, common-sense gun safety laws that most Americans want."

But many have given up hope of meaningful reform in a majority-led Republican Congress where Obama failed to enact gun curbs amid partisan rancor.

Since January 2013, there have been at least 291 school shootings across the country -- an average of one a week, according to the non-profit group Everytown for Gun Safety.

"It is pretty clear that we're failing our kids here," said Melissa Falkowski, a teacher who squeezed 19 students into a closet at the high school to shield them from harm.