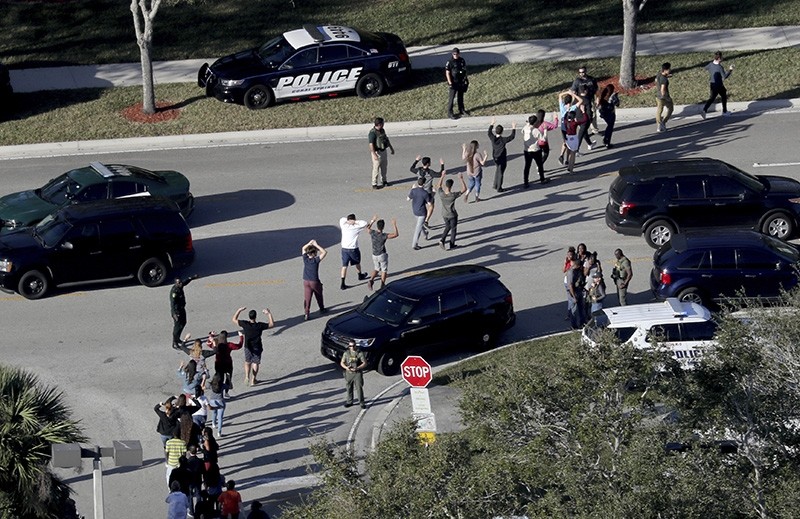 In this Feb. 14, 2018 file photo, students hold their hands in the air as they are evacuated by police from Marjory Stoneman Douglas High School in Parkland, Fla., after a shooter opened fire on the campus. (AP Photo)
by Feb 17, 2018 12:00 am

A teenager accused of shooting to death 17 people at a Florida high school was investigated by police and state officials as far back as 2016 after slashing his arm in a social media video, and saying he wanted to buy a gun, but authorities determined he was receiving sufficient support, a newspaper said on Saturday.

Nikolas Cruz, 19, is charged with committing multiple murders on Wednesday at the Marjory Stoneman Douglas High School in Parkland, a Miami suburb. More than a dozen people also were wounded in the deadliest shooting at a U.S. high school.

More vigils and funerals were scheduled for this weekend in and around Parkland. Two gun shows and a rally calling for the firearm safety legislation also were due to be held nearby.

According to a report by the South Florida Sun Sentinel, a video of Cruz cutting his arm posted to the social media network Snapchat in September 2016 raised concerns among law enforcement and at the Florida Department of Children and Family Services.

"Mr. Cruz stated he plans to go out and buy a gun. It is unknown what he is buying the gun for," said a report written by department officials after investigators interviewed the teenager, according to the South Florida Sun Sentinel.

The newspaper reported that the investigators ultimately decided that Cruz, then 18, was receiving enough support from mental health professionals and from his school, and that any risk in his case was low.

Representatives for the Department of Children and Family Services did not respond to requests from comment.

On Friday, the Federal Bureau of Investigation admitted it failed to investigate a warning this year that Cruz possessed a gun and the desire to kill.

A person described as close to Cruz called an FBI tip line on Jan. 5 to report concerns about him, according to the FBI. That information was not forwarded to the FBI's Miami office, in what agency officials called a breakdown in protocol.

"We have spoken with victims and families and deeply regret the additional pain this causes all those affected by this horrific tragedy," Wray said in a statement on Friday.

The latest U.S. mass shooting has raised concerns about potential lapses in school security and stirred the continuing U.S. debate pitting proponents of tougher restrictions on firearms against advocates for gun rights, which are protected by the U.S. Constitution's Second Amendment.

U.S. President Donald Trump and some other political leaders have said mental illness prompted the massacre. Cruz had been expelled from the high school for undisclosed disciplinary reasons and former classmates described him as an outcast and troublemaker with a fascination for weaponry.

According to CNN, Cruz posted disparaging comments about Jews, African Americans and gays in a private chat group on the social media network Instagram.

"I think I am going to kill people," Cruz wrote in the group, according to CNN, which also quoted an unnamed law enforcement source as saying the suspect bought at least five guns in the past year.

Cruz's attorneys at the Broward County Public Defender's Office could not immediately be reached for comment.

Broward County Sheriff Scott Israel has said that his office had received about 20 "calls for service" in the past few years regarding Cruz and would scrutinize all of them to see if they were handled properly.

In Coral Springs, a neighboring suburb, Life Fellowship Church Pastor Harold Altamirano and about three dozen worshipers gathered on Saturday to walk around the community and pray for healing.

"We just want to tell Parkland that you are not alone. We are hurting with you," Altamirano said. "Let's not allow fear to win. Love has to have the last say."