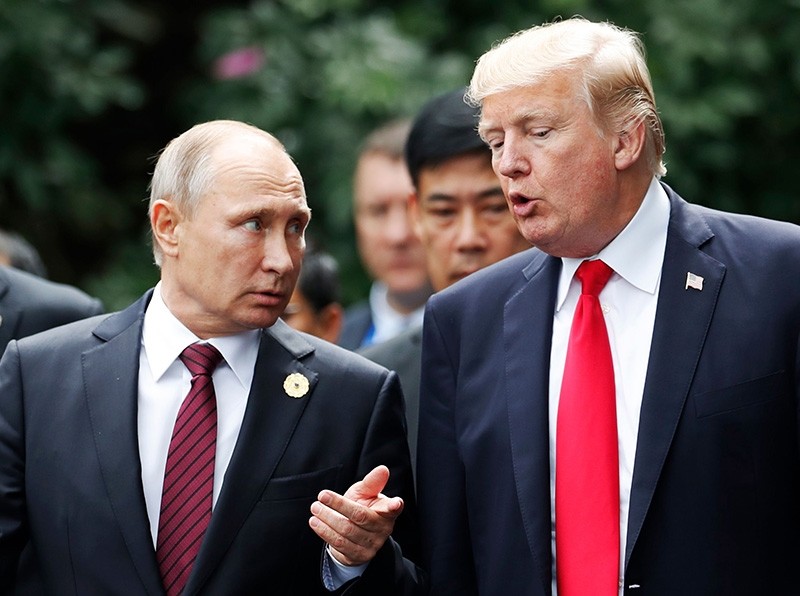 In this file photo taken on November 11, 2017 US President Donald Trump (R) and Russia's President Vladimir Putin talk as they make their way to take the ,family photo, during the APEC leaders' summit in the Vietnamese city of Danang. (AFP Photo)
by Feb 17, 2018 12:00 am

Moscow on Saturday dismissed as "blabber" and "fantasies" allegations that it interfered in the election that brought President Donald Trump to power, denials that drew immediate scorn from U.S. officials.

The traded barbs, made at the Munich Security Conference, came a day after the United States indicted 13 Russians for running a secret campaign to sway the 2016 vote.

"I am amazed that... the Russians come, send someone every year to basically refute the facts," U.S. Director of National Intelligence Dan Coats said.

Earlier, Russian Foreign Minister Sergei Lavrov told the Munich attendees about the U.S. charges: "So as long as we don't see facts, everything else is blabber."

The indictments, which include the first charges laid by U.S. special counsel Robert Mueller for election interference, detailed a stunning operation launched in 2014 in a bid to sow division and influence American politics "including the presidential election of 2016."

Mueller alleges that by mid-2016, the campaign -- under the direction of Yevgeny Prigozhin, a close ally of Russian President Vladimir Putin -- became focused on boosting Trump and demeaning his rivals including Democrat Hillary Clinton.

It allegedly involved hundreds of people working in shifts and with a budget of millions of dollars. Three companies were also indicted.

The indictments made no judgment however on whether the alleged Russian efforts had altered the outcome of the election.

When asked to comment on the charges at the gathering in Germany, Lavrov stressed that U.S. officials, including Vice President Mike Pence, had in the past "denied that any country influenced results of the election".

Former Russian ambassador to the U.S. Sergey Kislyak was equally dismissive when he took to the stage at the top security gathering in Munich.

"We didn't meddle in the American political life," said Kislyak, who was posted in Washington when Trump's White House win stunned the world.

"Whatever allegations are being mounted against us are simply fantasies that are being used for political reasons inside the United States in the fight between different sides of the political divide," he added.

Kislyak's own name has popped up in Mueller's probe as part of his inquiries into contacts between Russia and the Trump team.

In December, Mueller announced that former Trump national security advisor Michael Flynn had pleaded guilty to lying about his conversations with then-ambassador Kislyak in 2016.

Despite the vehement Russian denials, U.S. National Security Adviser H.R. McMaster, speaking in Munich immediately after Lavrov, said "evidence" of such attempts to "interfere in our democratic process" would become harder to hide.

"We're becoming more and more adept at tracing the origins of this espionage and subversion, and as you can see with the FBI indictment, the evidence is now really incontrovertible and in the public domain," McMaster said.

While in the past, investigators were wary of divulging their IT intelligence capabilities, "now that this is in the arena of a law enforcement investigation, it's going to be very apparent to everyone," McMaster said.

Trump meanwhile has seized on the indictments as proof that his campaign team did not conspire with Moscow.

"Russia started their anti-U.S. campaign in 2014, long before I announced that I would run for president," he tweeted Friday.

"The results of the election were not impacted. The Trump campaign did nothing wrong - no collusion!"

None of the 13 Russian suspects are in U.S. custody.