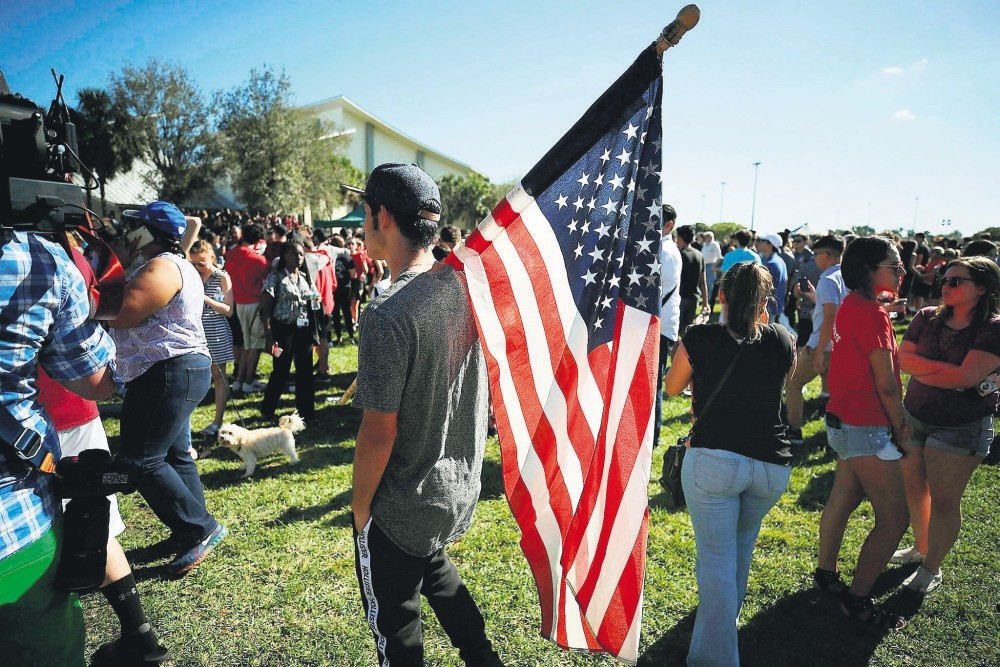 The 2nd Amendment of the United States has once again takes center-stage after a mentally ill 19-year-old associated with a White-supremacist, secessionist organization opened fire at his former high school, killing 17

A troubled teen with alleged ties to a white supremacist-secessionist group confessed Thursday to murdering 17 people at his former high school in Florida, as the FBI admitted it had received a tip-off about the 19-year-old gunman, yet failed to stop him.

Nicolas Cruz has been charged with 17 counts of premeditated murder, appearing Thursday afternoon before a judge who ordered him held without bond.

After being read his legal rights, "Cruz stated that he was the gunman who entered the school campus armed with an AR-15 and began shooting students that he saw in the hallways and on the school grounds," court documents showed.

Cruz also admitted he discarded his rifle - which he bought legally in Florida almost exactly one year ago - and tactical gear in order to blend in with the crowd to flee the campus, the documents showed.

He was detained 40 minutes later, found walking the streets by a deputy, and did not resist arrest.

None of his classmates were surprised that their assumptions that he would one day shoot up the school came true.

In a somber televised address to the nation in response to the 18th school shooting so far this year, President Trump vowed to make mental health a priority - after tweeting about the "many signs" the gunman was "mentally disturbed" - while avoiding any talk of gun curbs, for which he was criticized.

Earlier in the day, president Trump had asserted that "neighbors and classmates knew he was a big problem. "We must always report such instances to authorities, again and again!"

The FBI confirmed it was alerted last September to a message posted on YouTube, in which a user named Nikolas Cruz vowed: "I'm going to be a professional school shooter."

In a statement, the FBI said it had carried out "database reviews and other checks" but was unable to identify the person who made the post.

Fellow students knew he posted violent messages online, and on Thursday the Anti-Defamation League claimed he was a member of a white supremacist group, the ‘Republic of Florida' [ROF].

The ROF is a secessionist, white-supremacist organization which seeks to create an ethno-state in Florida, condemning miscegenation. The group does not support president Trump, saying that they don't have "any desire to be part of the United States, and want our own country, and do not support the Federal Government."

Jordan Jereb, an ROF cell leader, however told the ADL that his organization had not supported Cruz's attack.

"Nobody I know told him to do that, he just freaked out," Jereb said in a separate interview with The Daily Beast. "I don't know precisely what he believes," he said.

Despite Cruz's suggested beliefs, only one of the 17 victims were actually non-White. He had also told his adoptive family on the day he went on his rampage, Feb.14, that he doesn't go to school "on Valentine's Day," raising further questions as to his motives other than political action or just mental illness.

The school shootings are part of a broader epidemic of gun violence in a country that loses 33,000 people to gun-related deaths each year, two-thirds of them suicides, most others being related to gang-crime.

While semi-automatic AR-15-style rifles make up a tiny percentage of the overall violence, they are disproportionately represented in cases of mass shootings with multiple victims.

Former president Barack Obama issued an appeal for action, insisting "we have to change" and calling for what he deemed to be a "long overdue, common-sense gun safety laws that most Americans want."

"It is pretty clear that we're failing our kids here," said Melissa Falkowski, a teacher who squeezed 19 students into a closet at the high school to shield them from harm.

Florida Republican Senator Marco Rubio was pessimistic about the future of gun violence, saying: "I'm trying to be clear and honest here, if someone's decided ‘I'm going to commit this crime,' they will find a way to get the gun to do it. That doesn't mean you shouldn't have a law to make it harder."

Statistics from other states in the union, as well as other countries would seem to support this assertion when it comes to mass shootings specifically, due to the fact that many countries with extremely strict gun laws, such as France, have had a number of deadly mass shootings over the years.

"Even if they couldn't pass the background check, then they could go buy them the way MS-13 does and other gangs and other street elements do - the black market," he added.