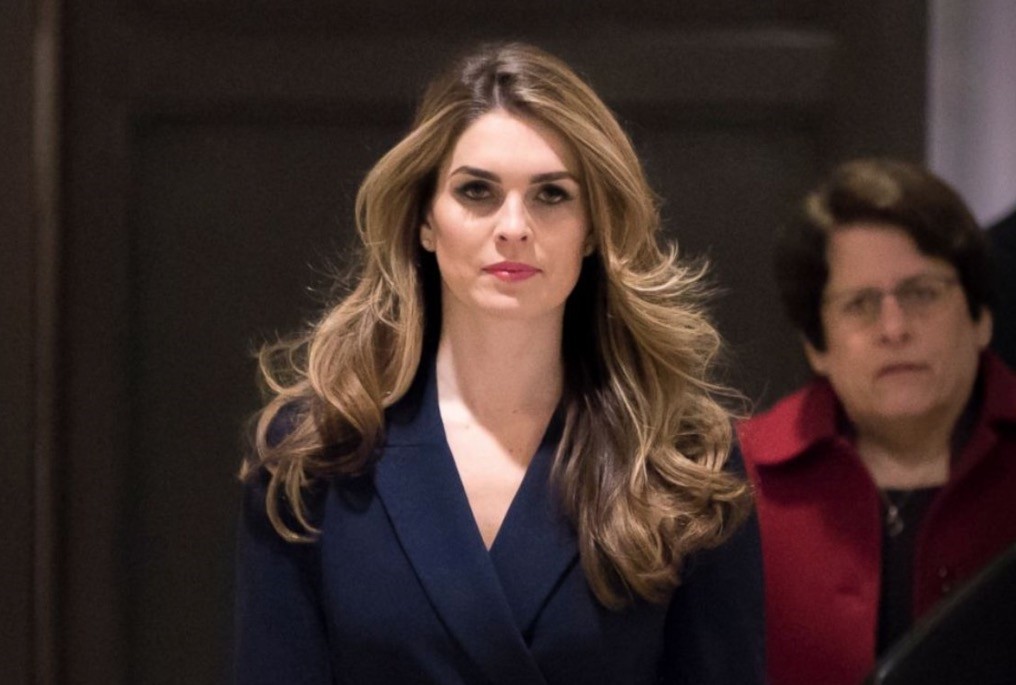 White House communications director Hope Hicks, one of President Donald Trump's closest advisers, told colleagues on Wednesday that she was resigning from her job, the New York Times reported.

The departure of Hicks, who worked as a one-woman communications shop during his campaign, came as a surprise Wednesday to most in the White House — and cast a pall over the West Wing at a trying time for the president. It leaves Trump increasingly without support of the familiar aides who surrounded him during his campaign, and marks the latest in a string of high-level departures in the administration's second year.

Hicks, 29, had a seemingly untouchable role in the West Wing, often viewed more as a surrogate daughter than a staffer. Perhaps most importantly, she served as Trump's glamorous shield and validator, always ready to provide "Mr. Trump" with a smiling dose of positive reinforcement, and controlling reporters' access. She was the fourth person to occupy the position since the president was sworn in, as the Trump White House has set modern records for staff turnover.

In a statement, Trump praised Hicks for her work over the last three years, saying he "will miss having her by my side." Hicks informed Trump of her decision Wednesday, a White House official said.

Hicks, who occupied the desk closest to the Oval Office in the West Wing, has been a central participant in or witness to nearly every milestone and controversy of the Trump campaign and White House. She began her White House tenure as director of strategic communications — a title that only partly captured her more expansive role as the president's gatekeeper to the press.

The news comes a day after Hicks was interviewed for nine hours by the House panel investigating Russia interference in the 2016 election and contact between Trump's campaign and Russia.

Hicks acknowledged to a House intelligence panel Tuesday that she has occasionally told "white lies" for Trump. But she said she had not lied about anything relevant to the Russia investigation. She has also been interviewed by special counsel Robert Mueller's team about her role in crafting a statement about Donald Trump Jr.'s 2016 meeting with Russians, as Mueller's expansive probe of Russian interference in the 2016 election and potential misdeeds committed by those in the president's orbit moves ever closer to the Oval Office.

Hicks' departure leaves a vacuum in the White House communications team, and in the president's collection of trusted aides. The announcement came a day after news broke of the impending departure of deputy communications director Josh Raffel, and just a few days after senior adviser Jared Kushner saw his security clearance downgraded — limiting his access to classified information.

"I can't imagine anyone here leaving a bigger hole in the White House than Hope on her departure," said White House lawyer Ty Cobb.

White House officials and outside advisers suggested Hicks' departure would strengthen chief of staff John Kelly's control over what has been an oftentimes chaotic West Wing.

In a statement, Kelly said Hicks had become "a trusted adviser and counselor," but behind the scenes, the pair had occasionally clashed over her more informal role. Kelly had begrudgingly supported making Hicks communications director after the short-lived tenure of Anthony Scaramucci, in an effort to integrate her role into the rest of the White House's communications strategy.

Hicks said in a statement, "There are no words to adequately express my gratitude to President Trump." She added she wished Trump and his administration the "very best."

Before Wednesday's announcement, Hicks had not been happy for some time, according to two people with knowledge of her thinking who were not authorized to discuss the matter publicly. One person said Hicks had been increasingly feeling the stress of the position, especially in the wake of revelations about her relationship with former staff secretary Rob Porter. Since then, Hicks has been hounded by paparazzi, who have at times staked out her apartment building.

Hicks was an improbable campaign press secretary and senior White House official. A former Ralph Lauren fashion model and public relations pro who worked for Trump's daughter Ivanka, Hicks had no political background when Trump asked her to serve on his campaign.

She was an unconventional press secretary, rarely mixing it up with reporters, almost never giving on-the-record interviews and, despite Trump's fondness for cable, staying off TV. She spoke at a rally exactly once in December 2016, after Trump beseeched her "to say a couple of words."

She said nine: "Hi. Merry Christmas everyone, and thank you, Donald Trump."

Within the White House, she was seen as a stabilizing force on Trump, who at times would grow unhappy when she was not around. As the West Wing was riven by rivalries in the early months of the administration, she allied herself with Ivanka Trump and Jared Kushner in opposition, at times, to the nationalist forces led by then-chief strategist Steve Bannon.

Hicks, who has long tried to avoid media attention, was thrust into the spotlight recently when it was revealed she had been dating Porter. He left the administration after accusations that he had abused his two ex-wives became public.

White House press secretary Sarah Huckabee Sanders told reporters that Hicks would remain at the White House "for several weeks" and denied that Hicks' decision to leave had anything to do with her lengthy testimony before the House Intelligence Committee.

"Don't try to read more into it than exists," Sanders said. "This is something that she's been thinking about for a while."