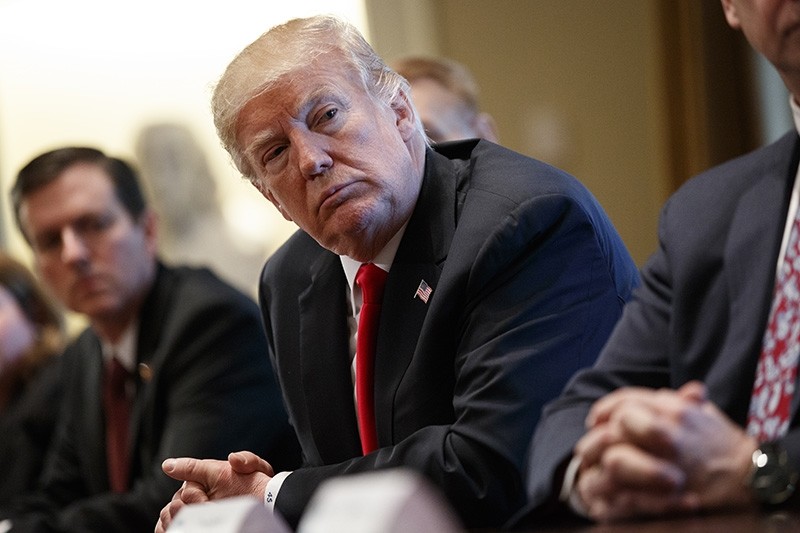 President Donald Trump listens during a meeting with steel and aluminum executives in the Cabinet Room of the White House, Thursday, March 1, 2018, in Washington. (AP Photo)
by Associated Press
Mar 06, 2018 12:00 am

President Donald Trump cited "possible progress" Tuesday after South Korea announced that North Korea has agreed to halt tests of nuclear weapons and ballistic missiles if it holds talks with the U.S. on denuclearization. Trump also said it may be a case of "false hope."

Nonetheless, Trump added that a "serious effort" to ease regional tensions and rid the Korean peninsula of nuclear weapons is being made by all sides.

Trump responded on Twitter after a flurry of announcements Tuesday by the South Korean government after its envoys returned home following a rare visit to North Korea. In another breakthrough announcement, South Korea also said it has agreed with North Korea to hold summit talks in late April.

"Possible progress being made in talks with North Korea. For the first time in many years, a serious effort is being made by all parties concerned," Trump tweeted. "The World is watching and waiting! May be false hope, but the U.S. is ready to go hard in either direction!"

South Korea also said that North Korea said it has no reason to possess nuclear weapons if it has a security guarantee, and that the North promised not to use nuclear and conventional weapons against South Korea. The Koreas also agreed to establish a "hotline" between leaders to reduce military tensions.

North Korea has repeatedly and bluntly declared that it will not give up its nuclear weapons.

Trump last week responded to an overture from North Korea for talks with the U.S. by saying that will happen only "under the right conditions."

The administration's position is that North Korea must get rid of its nuclear and missile programs before any talks can take place. The U.S. has applied a series of sanctions, including a fresh round last month, in what it has described as a "maximum pressure campaign" to force North Korea to disarm.

The Trump administration says it is open to talks with North Korea, primarily to explain how the U.S. will keep up the pressure until it takes steps toward eliminating its nuclear weapons. U.S. officials differentiate talks from negotiations. For negotiations to occur, the U.S. first wants the government in Pyongyang to accept that its nuclear program will be on the table.

"The table is set for a meaningful, sustained dialogue between Washington and Pyongyang," said Daryl Kimball, executive director of the U.S.-based Arms Control Association. "It is important that the United States government seize upon_and that Congress support_this important diplomatic opening that has been forged by our close South Korean allies and agree to engage in talks with North Korea at a very senior level without preconditions."

Kimball added that the U.S. should be prepared to modify U.S.-South Korea military exercises that were postponed because of the Olympics but will likely happen in the spring. North Korea hates the military drills, viewing them as a provocation and a threat.