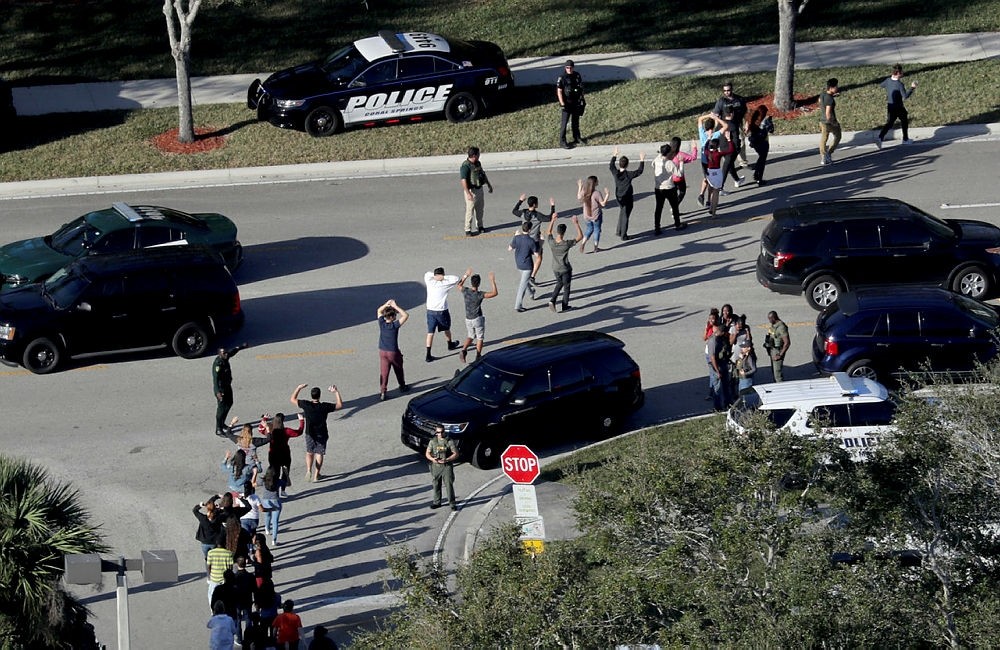 In this Feb. 14, 2018 file photo, students hold their hands in the air as they are evacuated by police from Marjory Stoneman Douglas High School in Parkland, Fla., after a shooter opened fire on the campus. (AP Photo)
by Mar 09, 2018 12:00 am

"If he shoots, play dead," the mother of a Marjory Stoneman Douglas High School student told her daughter during the Florida mass shooting last month that left 17 dead, according to a recording of an emergency 911 call released on Thursday.

The mother, who can be overheard talking to her daughter while a man speaks with the 911 dispatcher, repeatedly tells her daughter she loves her until the police arrive at the school in Parkland on Feb. 14, according to the recording released by the Broward Sheriff's Office.

"I love you, I love you, it's going to be fine. Can you hide somewhere? Can you play dead?" the unidentified mother can be heard saying on the call, which lasted more than 15 minutes. "If he shoots, you need to play dead. If he shoots, play dead."

The call was one of 10 released on Thursday of 81 received the day of the shooting.

Nikolas Cruz, a 19-year-old former student, is accused of using a semiautomatic assault rifle to kill 17 students and faculty members at the high school.

On the recorded 911 call in which the unidentified mother can be overheard, the dispatcher advises the man who called what to tell the girl.

"Don't do nothing. I don't need her to make any noise. Everybody needs to be quiet in that room," the dispatcher said.

Only one recording that was released came from inside the school, and it was made by someone who sounded like a male student whispering during the 40-second call. "Someone is shooting up the school at Stoneman Douglas," the voice said.

"Someone is shooting up Marjory Stoneman Douglas," he said.

"Marjory Stoneman Douglas High School is being shot up," the caller said before the call ended in a dial tone.

In other calls, dispatchers advised adults to tell students they were in contact with to silence their cellphones and hide.

Also on Thursday, Cruz's lawyers changed his plea to "stands mute" to the charges from his initial plea of "not guilty," according to court documents.

The public defender's office in Broward County has said Cruz was willing to plead guilty if county prosecutors choose not to pursue the death penalty. The prosecutors' office has not announced whether it will pursue Cruz's execution.

"We are not saying he is not guilty, but we can't plead guilty while death is still on the table," his attorney, public defender Howard Finkelstein, told Reuters in an email.

However, Finkelstein said that a not guilty plea "seemed wrong" and was "a legal fiction that could bring unnecessary pain to the victims' families."

Finkelstein said Cruz would agree to 34 consecutive life sentences without parole, for the 17 people killed and 17 wounded. He said the court would likely enter a plea of "not guilty" on Cruz's behalf to move the case forward.