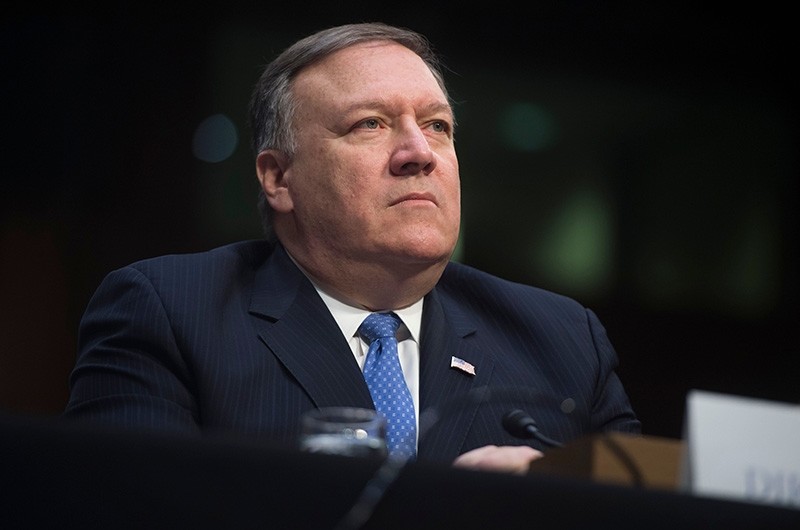 In this file photo taken on Feb. 13, 2018 CIA Director Mike Pompeo testifies on worldwide threats during a Senate Intelligence Committee hearing on Capitol Hill in Washington, D.C. (AFP Photo)
by Compiled from Wire Services Mar 13, 2018 12:00 am

In a shakeup of Trump's Cabinet, President Donald Trump fired Secretary of State Rex Tillerson after a series of public rifts and replaced his chief diplomat with CIA Director Mike Pompeo

Speaking to reporters at the White House shortly before departing for Joint Base Andrews for his trip to California, Trump said that he made the decision to oust Secretary of State Rex Tillerson "by myself."

The president added that Tillerson will be "much happier now," and he appreciates his service. Trump said he and Tillerson had been "talking about this for a long time," and they had disagreed on issues like the Iran deal.

Trump also praised the energy and intellect of his incoming Secretary of State, Mike Pompeo, who has led the CIA.

In his first speech after he was fired by Trump, Tillerson said he was delegating all of his responsibilities to the State Department's No. 2 official and that he would leave office on March 31.

"What is most important is to ensure an orderly and smooth transition during a time that the country continues to face significant policy and national security challenges," Tillerson told reporters in a packed briefing room at the State Department.

Tillerson has long been dogged by reports that his time in office will be cut short. As recently as December, Trump had rejected speculation that Tillerson's days were numbered, noting that the two "work well together."

A White House official said Trump wanted to have a new team in place ahead of upcoming talks with North Korea and various trade talks. The official spoke on condition of anonymity because the official was not authorized to speak publicly.

"We got along actually quite well but we disagreed on things," Trump told reporters. "When you look at the Iran deal, I thought it was terrible, he thought it was okay. I wanted to either break it or do something, he felt a little differently. So we were not really thinking the same."

Friction between the president and the country's top diplomat has grown increasingly public through the year. For Tillerson, who left his job as Exxon Mobil's CEO, a premature departure from the cabinet had been described by media outlets as inevitable. At the White House, frustration with Tillerson has mounted over what officials have described as his aloofness and his slowness in filling key roles to carry out the president's agenda.

Trump and Tillerson have not always seen eye to eye on matters of foreign policy. On Monday Tillerson blamed Russia for the poisonings in England of a former Russian double agent and his daughter. Earlier, White House press secretary Sarah Sanders refrained from saying Moscow was responsible. When Tillerson in June called on Arab countries to ease their blockade on Qatar, Trump emerged in the Rose Garden hours later to lambaste Qatar for funding terrorism. Trump also deemed diplomacy with North Korea a waste of time when Tillerson was pursuing just that. Tillerson's advice to Trump to remain in the Paris climate deal and certify Iran's compliance with the nuclear deal was similarly overruled.

Pompeo, in contrast, has formed a tight relationship with Trump that has led to a role much broader than many past CIA directors. A former businessman and conservative Republican congressman from Kansas, Pompeo is at the White House nearly every day to deliver the daily intelligence briefing, a task often delegated to less senior officials. He sometimes stays longer to accompany Trump to other meetings. He shares the president's hardline stance against Iran.

Cohn's departure has sparked internal fears of an even larger exodus, raising concerns in Washington of a coming "brain drain" around the president that will only make it more difficult for Trump to advance his already languishing policy agenda.

Coinciding with the heated debate over tariffs, Trump's communications director Hope Hicks, one of his closest and most devoted aides, announced her resignation late February, leaving a glaring vacancy in the informal cadre of Trump loyalists in the White House. Turnover after just over a year in office is nothing new, but the Trump administration has churned through staff at a dizzying pace since taking office last January, and allies are worried the situation could descend into a free-fall.