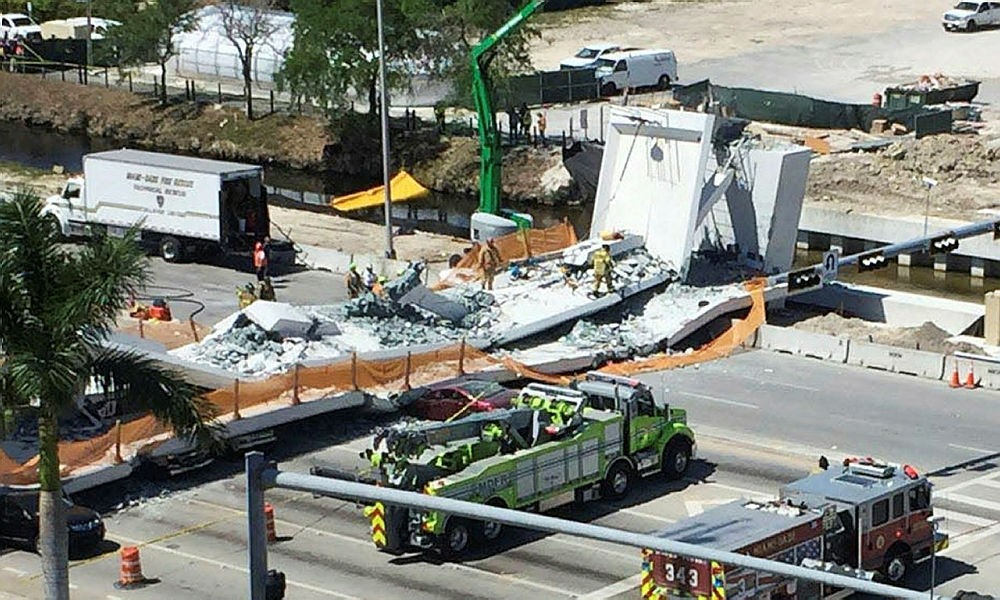 Six people were killed and 10 others hospitalized in the collapse of a pedestrian bridge under construction at Florida International University, police said Friday as state and federal investigators worked to determine how and why the five-day-old span failed.

"This has turned into from a rescue to a recovery operation," Miami-Dade Police Det. Alvaro Zabaleta said.

"We have to remove some of this piece by piece. It's very unstable," Miami-Dade County Fire Chief Dave Downey said hours earlier.

The $14.2 million pedestrian bridge was supposed to open in 2019 as a safe way to cross a busy road between the university campus and the community of Sweetwater, where many students live.

Florida Gov. Rick Scott and U.S. Sen. Marco Rubio joined other authorities at the scene. Rubio said the public and the families of the dead and injured deserve to know "what went wrong."

Scott added an investigation will get to the bottom of "why this happened and what happened," and that if anyone did anything wrong, "we will hold them accountable."

Rubio, who is an adjunct professor at the school, noted the pedestrian bridge was intended to be an innovative and "one-of-a-kind engineering design."

Renderings showed a tall, off-center tower with supporting cables attached to the walkway. When the bridge collapsed, the main tower had not yet been installed, and it was unclear what builders were using as temporary supports.

An accelerated construction method was supposed to reduce risks to workers and pedestrians and minimize traffic disruption, the university said. The school has long been interested in this kind of bridge design; in 2010, it opened an Accelerated Bridge Construction Center to "provide the transportation industry with the tools needed to effectively and economically utilize the principles of ABC to enhance mobility and safety, and produce safe, environmentally friendly, long-lasting bridges."

The project was a collaboration between MCM Construction, a Miami-based contractor, and Figg Bridge Design, based in Tallahassee. Figg is responsible for the iconic Sunshine Skyway Bridge across Tampa Bay.

Figg's statement Thursday said the company was "stunned" by the collapse and would cooperate with investigations.

"In our 40-year history, nothing like this has ever happened before," the statement said. "Our entire team mourns the loss of life and injuries associated with this devastating tragedy, and our prayers go out to all involved."

MCM Construction Management promised on its Facebook page to participate in "a full investigation to determine exactly what went wrong."

Robert Bea, a professor of engineering and construction management at the University of California, Berkeley, said it was too early to know exactly what happened, but the decision to use what the bridge builders called an "innovative installation" over a heavily traveled thoroughfare was risky.

"Innovations take a design firm into an area where they don't have applicable experience, and then we have another unexpected failure on our hands," Bea said after reviewing the bridge's design and photos of the collapse.

The FIU community, along with Sweetwater and county officials, held a "bridge watch party" March 10. That's when the span was lifted from its temporary supports, rotated 90 degrees across an eight-lane thoroughfare and lowered into its permanent position over the busy road.

FIU President Mark Rosenberg said tests were being done on Thursday. Authorities said two construction workers were on the bridge when it collapsed; it's unclear what the tests were or if they contributed to the failure.

"This bridge was about goodness, not sadness," Rosenberg said. "Now we're feeling immense sadness, uncontrollable sadness. And our hearts go out to all those affected, their friends and their families. We're committed to assist in all efforts necessary, and our hope is that this sadness can galvanize the entire community to stay the course, a course of goodness, of hope, of opportunity."