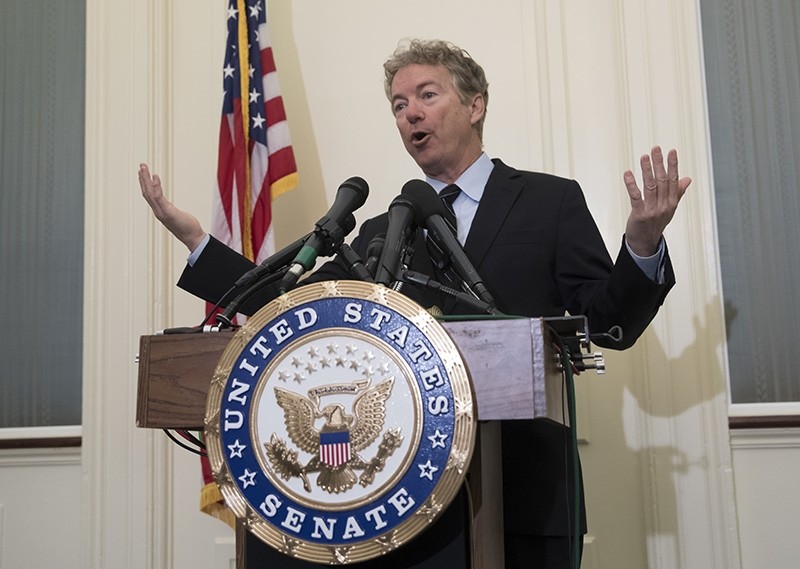 Senate confirmation isn't expected to go as smoothly for President Donald Trump's new selections for secretary of state and CIA director as they did last year.

Senate Democrats — and some top Republicans — are slow-walking the process amid fresh questions over the Trump administration's stance toward Russia and the CIA's dark history of torture.

Republican Senator Rand Paul said Wednesday he would oppose Trump's nomination of CIA Director Mike Pompeo to be secretary of state and CIA Deputy Director and career spymaster Gina Haspel to become the new director of the CIA.

Paul added he would "do everything I can" to block them. He was the first of Trump's fellow Republicans to come out against the nominations, which the president announced on Tuesday. Paul was the only Republican who voted last year against Pompeo's nomination to head the CIA.

He said Pompeo and Haspel both supported war in Iraq and want war in Iran, which he opposes, and he criticized both for supporting the use of waterboarding and other "heinous" so-called enhanced interrogation techniques widely considered torture. He said the practice "sends a terrible message to the world."

Between 2003 and 2005, Haspel oversaw a secret CIA prison in Thailand where terror suspects Abu Zubayadah and Abd al Rahim al-Nashiri were waterboarded, current and former U.S. intelligence officials said. Waterboarding is a process that simulates drowning and is widely considered to be a form of torture. Haspel also helped carry out an order to destroy waterboarding videos, which prompted a lengthy Justice Department investigation that ended without charges.

Paul told a news conference on Thursday: "I find it just amazing that anyone would consider having this woman at the head of the CIA. My opposition to her is over her direct participation in interrogation and her gleeful enjoyment at the suffering of someone who was being tortured."

Pompeo, a former Republican member of the House of Representatives, was confirmed as CIA director with the support of two-thirds of the Senate last year. Many legislators have said they are happy with his work at the agency, and expect he will be confirmed as the United States' top diplomat.

Another Republican senator, John McCain, who was tortured as a prisoner of war in Vietnam, also had questions about Haspel, but did not say he would oppose her. McCain has not been in Washington to vote this year as he undergoes cancer treatment at home in Arizona.

Haspel is held in high regard at the CIA. An intelligence officer who worked with Haspel denied Rand's accusation that she was a "gleeful participant," saying: "That makes it sound like she was holding the bucket and laughing, when all she was was a bureaucrat following orders."

A CIA spokesman said the agency was aware of Paul's statement and had no immediate comment.

Republicans have a slim 51-49 Senate majority, so it would take little intraparty dissent to block a nomination - but only if all Democrats vote no.

Paul could make the process difficult, particularly for Pompeo. He is on the Senate Foreign Relations Committee, which will hold Pompeo's confirmation hearing and vote on whether to report his nomination favorably to the full Senate.

Paul's opposition could prevent that, if every Democrat opposed the nominee, although the Senate's Republican leaders could hold a vote anyway.

Committee Democrats said it was too early to say how they would vote.

Senate Republicans said they expected both confirmation hearings to be held soon. Pompeo's is expected in April.

Every Democrat on the Foreign Relations panel voted against Trump's first secretary of state, Rex Tillerson, in January 2017, but the panel advanced his nomination by an 11-10 vote because every Republican, including Paul, backed him.

Voices from outside the Senate have also protested Haskel's nomination to the helm of the CIA, with human rights advocates strongly opposing the move.

"No one who had a hand in torturing individuals deserves to ever hold public office again, let alone lead an agency," Human Rights First's Raha Wala said Tuesday. "To allow someone who had a direct hand in this illegal, immoral and counterproductive program is to willingly forget our nation's dark history with torture."

After Haspel was named deputy CIA director, the European Center for Constitutional and Human Rights asked German prosecutors to issue a warrant for her arrest over her role in the interrogations. Federal prosecutors never issued the warrant because the case lacked a connection to Germany. But the rights group's allegations against Haspel remain part of a preliminary investigation that German authorities could revive if they receive evidence that any of the parties have links to Germany.

Lawyers for the psychologists wanted to interview Haspel and another CIA official involved in the program, but government lawyers told the federal judge in the case that the officials and documents were protected under the state secrets privilege and making them public would threaten national security.

Haspel has been chief of station at CIA outposts abroad. In Washington, she has held several senior leadership positions, including deputy director of the National Clandestine Service.

In her current post, she worked with Pompeo to manage intelligence collection, analysis, covert action, counterintelligence and cooperation with the CIA's foreign counterparts.

In a brief statement, the former undercover officer said she was "humbled" by Trump's confidence in her to lead the agency.