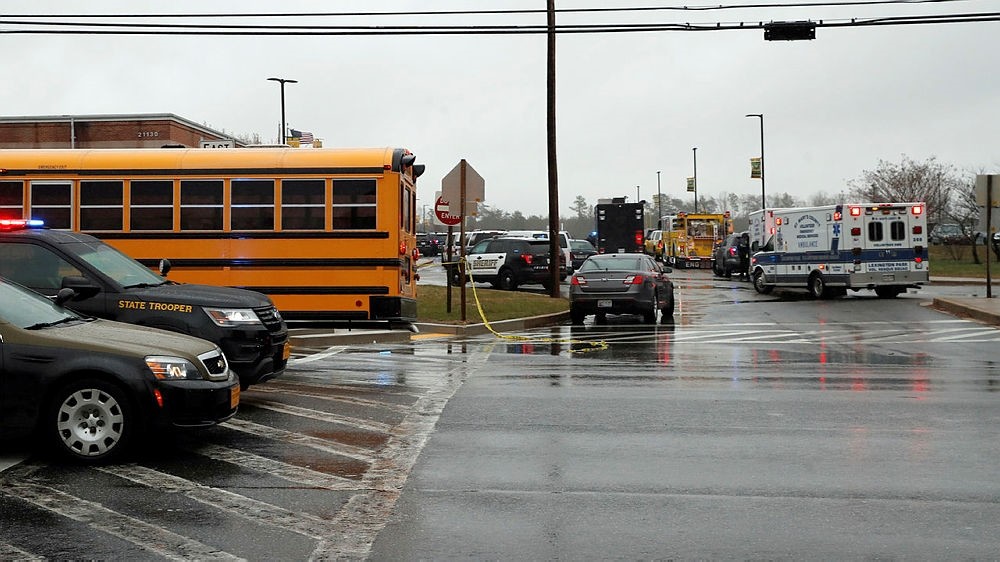 Vehicles of first responders and school buses are parked at the entrance to Great Mills High School Tuesday, March 20, 2018, in Great Mills. (AP Photo)
by Daily Sabah with Agencies Mar 20, 2018 12:00 am

A Maryland high school was on lockdown following a shooting on Tuesday morning, the local school district said in a statement, but the incident has since been "contained."

St. Mary's County Tim Cameron says a 16-year-old girl is in critical condition with life-threatening injuries and a 14-year-old boy was also hurt in the shooting at Great Mills High School.

Cameron told a news conference that the shooter — who died after being confronted by a school resource officer — has been identified as a 17-year-old boy. Sheriff Cameron also said there's an indication that a prior relationship existed between the shooter and the girl who was shot.

"This is what we pray we never have to do," Cameron said. "On this day we realized our worst nightmare, that our greatest asset, our children, were attacked in one of our bastions of safety and security, one of our schools.

"The notion of it can't happen here is no longer a notion," he added.

The shooting took place about 70 miles (110 km) southeast of the capital Washington, D.C.

The St. Mary's County sheriff's office confirmed an incident at the school and urged parents in a Twitter post not to approach the school. Federal investigators from the Bureau of Alcohol, Tobacco, Firearms and Explosives were heading to the school, the agency said.

The shooting occurred amid a re-energized national debate over school shootings in the United States following an attack on Feb. 14 at Marjory Stoneman Douglas High School in Parkland, Florida, where a gunman killed 17 students and faculty. A national student safety rally called March for Our Lives is planned for March 24 in the U.S. capital.