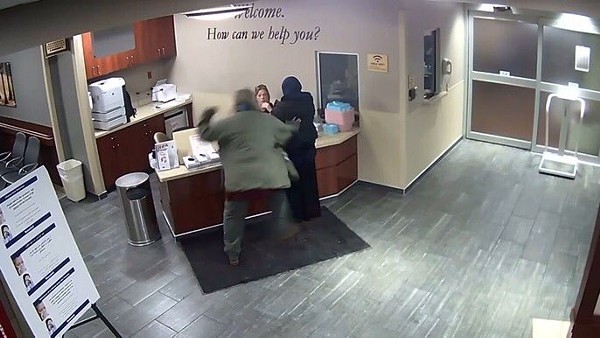 Headscarf-wearing Muslim woman checking in at the emergency room of a hospital in Michigan, US, violently attacked by 57-year-old manhttps://t.co/ocq4TcJkV8 pic.twitter.com/femgqvb9UX

A woman wearing the Muslim headscarf at a hospital in the U.S. state of Michigan has been violently attacked by a stranger while checking in at the emergency room, reports said Saturday.

According to video footage obtained from the Beaumont Hospital in Dearborn, a man approached the 19-year-old Muslim woman from the back and punched her in the head several times before being stopped by a security guard.

The attacker was identified as 57-year-old John Salvatore Deliz, Dearborn police said, while local WDIV TV noted that he was discharged from the hospital that day and had been harassing people in the lobby.

He was restrained by hospital security and was detained by police, who charged him with assault.

The Muslim woman is filing charges against the hospital for not doing enough to monitor the violent man.

"We want to hold them accountable for not looking out for the safety of other patients," Majed Moughni, the victim's attorney, told The Detroit News, adding that their main goal is to ensure that other people are not attacked the way his client was.

The attorney claimed that the attack was racially motivated as the perpetrator and the victim did not know each other.

"She'll never probably be the same person again. She's emotionally distressed. She's always looking behind her to make sure she's not going to get attacked again," Moughni said.

Islamophobia has been on the rise in the U.S. in the past several years, boosted by the election of Donald Trump as president and his discriminative political rhetoric, as well as the media bias against Muslims and Islam.

According to the Council on American-Islamic Relations (CAIR), "the number of hate crimes in the first half of 2017 spiked 91 percent compared to the same period in 2016."