Trump says DACA deal for young immigrants is off, threatens to kill NAFTA 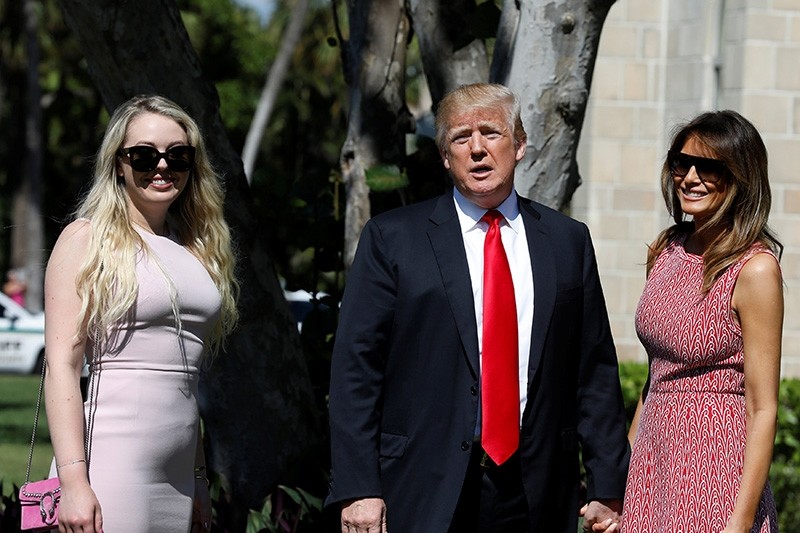 U.S. President Donald Trump talks to reporters about DACA as he arrives with first lady Melania Trump and daughter Tiffany for the Easter service at Bethesda-by-the-Sea Episcopal Church in Palm Beach, Florida, U.S., April 1, 2018. (Reuters Photo)
by Apr 01, 2018 12:00 am

President Donald Trump on Sunday said on Twitter that there will not be a deal on legalizing the status of young adult immigrants known as Dreamers, declaring that the U.S.-Mexico border is becoming more dangerous.

After posting a "Happy Easter" message on the social media platform, Trump followed with: "Border Patrol Agents are not allowed to properly do their job at the Border because of ridiculous liberal (Democrat) laws like Catch & Release. Getting more dangerous. 'Caravans' coming. Republicans must go to Nuclear Option to pass tough laws NOW. NO MORE DACA DEAL!"

He also threatened to kill the North American Free Trade Agreement, which is currently being renegotiated with Mexico and Canada.

DACA (Deferred Action for Childhood Arrivals) is the program created in 2012 under Democratic former President Barack Obama that Trump sought to rescind last autumn. Designed for individuals brought to the United States as children by parents who were undocumented immigrants, the program shielded the individuals from deportation and gave them work permits.

Trump is spending the Easter holiday in Palm Beach, Florida, at his Mar-a-Lago resort. He told reporters on his way into Easter services that "Mexico has got to help us at the border."

Trump has said he was open to brokering a deal with congressional Democrats who want to protect the program in exchange for funding to build a U.S.-Mexico border wall, a frequent campaign trail promise. He insisted during his presidential campaign Mexico would pay for the wall.

Although Trump threatened a veto last month of an omnibus spending bill because it did not address the fate of Dreamers and did not fully fund his border wall, he did sign the bill.

Trump on Sunday continued on Twitter that Mexico is doing "very little, if not NOTHING," to stop the flow of people across the southern border.

"They laugh at our dumb immigration laws. They must stop the big drug and people flows, or I will stop their cash cow, NAFTA. NEED WALL!"

Last week, U.S. Trade Representative Robert Lighthizer expressed optimism that negotiations to modify NAFTA to terms more favorable to the United States were making progress and that a deal in principle could be reached quickly.

The thorniest issues in the NAFTA talks with Mexico and Canada concern U.S. demands on automotive trade and dispute settlement systems. Linking the future of the 24-year-old trade deal to Trump's border wall plan has never been among U.S. negotiating objectives.