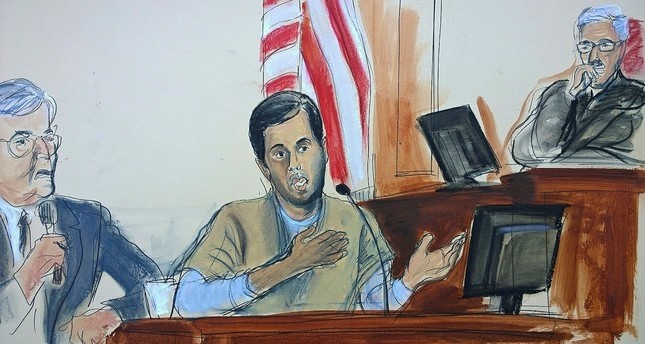 A Turkish lawyer representing wealthy gold trader Reza Zarrab allegedly paid bribes to a guard at a New York City jail where Zarrab was being held on charges of conspiring to help Iran evade U.S. sanctions, according to court papers and another of Zarrab's lawyer.

The bribe allegations were detailed in a criminal complaint filed on Thursday against the guard, Victor Casado, who had worked at the Metropolitan Correctional Center in Manhattan since 2012. A lawyer for Casado did not immediately respond to a request for comment.

Benjamin Brafman, a U.S. lawyer for Zarrab, confirmed in an email that the unidentified lawyer was Turkish and had been assisting Zarrab in jail, and that "none of his U.S. attorneys were involved or even aware" of their transaction.

Zarrab, 34, was arrested on March 16, 2016, before, in October 2017, turning state evidence and testifying against the former deputy CEO of Turkey's state-run lender Halkbank, Mehmet Hakan Atilla, who was arrested in March last year while on a business trip in the U.S.

Zarrab has accepted all the U.S. charges against him, including the violation of now-lifted U.S. sanctions against Iran, money laundering and other charges and agreed to cooperate as a witness against Atilla.

Atilla, 47, who was arrested while in the U.S. in March 2017, pled not guilty to the charges that accused him of conspiring with Zarrab.

Federal prosecutors accused Casado of accepting between $45,000 and $50,000 in bribes from "Inmate-1," typically through the unidentified lawyer.

In exchange, Casado would smuggle contraband, including alcohol and cellphones, as well as food, Vitamin C and over-the-counter pain medication into the jail for Inmate-1, prosecutors said.

While Inmate-1 was not identified by name, court papers said he has pleaded guilty to conspiring to violate U.S. sanctions against Iran and money laundering, matching Zarrab's plea, and to bribery in connection with his dealings with Casado.

Inmate-1 gave prosecutors information in the hope of obtaining leniency at sentencing, the papers showed.

Casado, 35, of the Bronx, was charged with five criminal counts, including bribery and fraud. He faces up to 20 years in prison on the most serious charges.

Turkey argues that the case has been turned into a political motion against Ankara. President Recep Tayyip Erdoğan on Sept. 8 slammed the U.S. administration in response to charges that were filed against Turkey's former economy minister who is accused of violating U.S. sanctions on Iran, calling the decision a political step taken against the Turkish state.