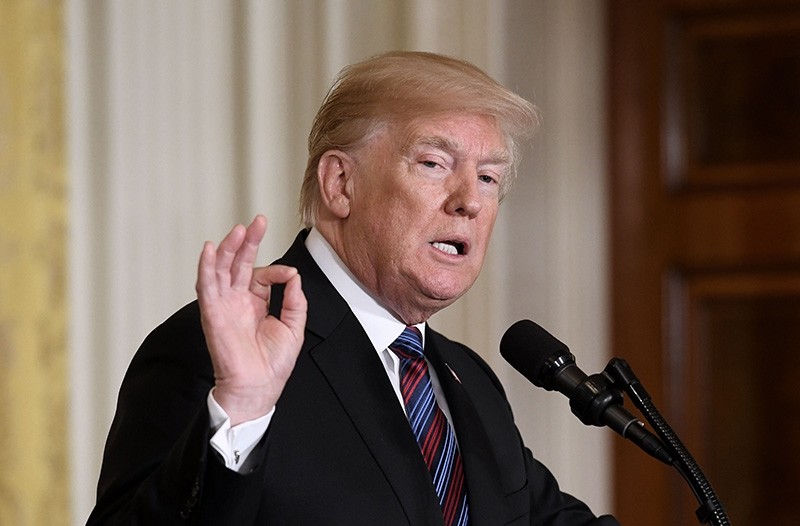 In this file photo taken on April 3, 2018 US President Donald Trump speaks during a joint press conference with three Baltic States (Estonia, Latvia and Lithuania) in the East Room of the White House in Washington, DC. (AFP Photo)
by Apr 06, 2018 12:00 am

Donald Trump will again snub the annual White House correspondents' dinner, organizers said Friday, amid an escalation of attacks by the president on the US media.

While other members of his administration are expected to attend the dinner in Washington on April 28, it will be the second year in a row that the president himself will stay away.

Trump regularly accuses major media organizations such as CNN, The New York Times and The Washington Post of bias, and he organized a rally of supporters on the same evening as last year's dinner.

The Republican president's assaults on the "fake news" media have sharpened in recent weeks and have included attacks on CNN president Jeff Zucker and Amazon founder Jeff Bezos, who owns The Washington Post.

Since taking up the presidency, Trump has strongly favored news outlets that provide glowing coverage such as Fox News, the Daily Caller, Newsmax and Sinclair, a group of almost 200 local TV stations.

Sinclair sparked controversy by recently forcing reporters to read a script about "fake stories" in the mainstream media.

A recent Knight-Gallup Poll showed 43 percent of Americans have a negative view of the news media, but more importantly for Trump, that figure is 68 percent among Republicans.

Talev said that while Trump would not attend the dinner, the White House had said the president would "actively encourage members of the executive branch to attend and join us as we celebrate the First Amendment," which guarantees freedom of speech.

"In keeping with tradition, Press Secretary Sarah Sanders also will represent the administration at the head table," Talev added.

Trump was famously ridiculed by his predecessor Barack Obama in a speech at the dinner in 2011.