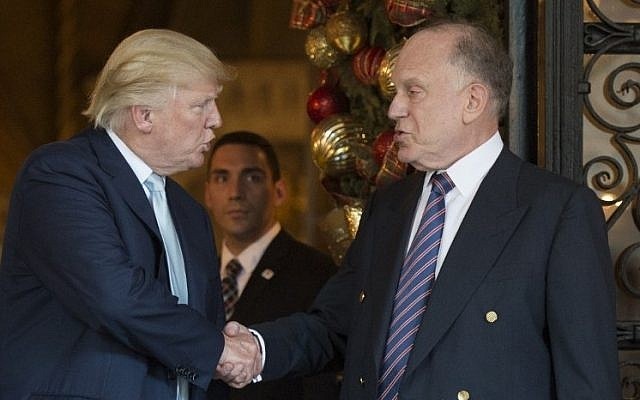 Donald Trump shakes hands with Ronald Lauder, President of the World Jewish Congress, after a meeting on December 28, 2016 at Mar-a-Lago in Palm Beach, Florida. (AFP Photo)
by Daily Sabah Apr 07, 2018 12:00 am

Billionaire computer scientist Robert Mercer, a top Trump supporter, and Ronald Lauder, the president of the World Jewish Congress and the heir to the Estee Lauder fortune, spent millions of dollars for a secretive group that ran anti-Muslim campaigns on social media.

Mercer has been under serious scrutiny over its role in bankrolling Cambridge Analytica's operation to improperly harvest information from over 50 million Facebook accounts to help Donald Trump win the 2016 presidential election.

In one ad, viewers are invited to "celebrate the arranged marriages of future jihadi soldiers" at a pork- and alcohol-free Oktoberfest in "Islamic State of Germany." Days before the 2016 elections, the group started sharing its final ad, in which the Statue of Liberty wears a burka and the Hollywood sign is changed to "Allahu Akbar."

The Open Secrets report said Secure America Now worked hand in hand with Facebook and Google to find target audience in swing states who were most likely to be receptive to their messages.

According to the report, the group did not target the American people in general but focused on the voters that could play a critical role in choosing the next U.S. president and it did it with the help of Google and Facebook.