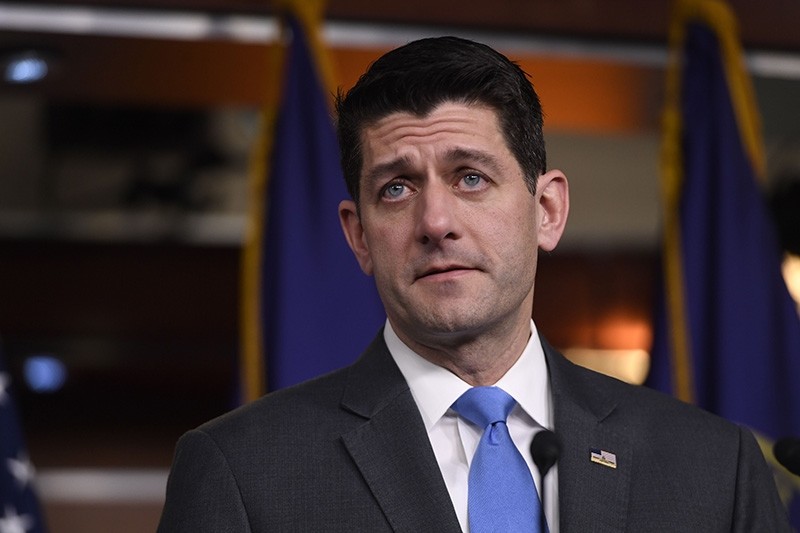 Speaker of the House Paul Ryan announces his retirement during a press conference on Capitol Hill in Washington, DC, April 11, 2018. (AFP Photo)
by Compiled from Wire Services Apr 11, 2018 12:00 am

The top Republican in the U.S. House of Representatives, Paul Ryan, has decided to retire when his term ends, casting his party into a leadership fight ahead of crucial midterm elections.

The bombshell was delivered by the speaker's counselor, Brendan Buck, who said Ryan would not seek re-election in November.

"This morning Speaker Ryan shared with his colleagues that this will be his last year as a member of the House.

"He will serve out his full term, run through the tape, and then retire in January," Buck said in a statement.

Ryan's plans have been the source of much speculation and will set off a scramble among his lieutenants to take the helm. A self-styled budget guru, Ryan had made tax cuts a centerpiece of his legislative agenda, and a personal cause, and Congress delivered on that late last year.

Ryan, who reluctantly assumed the House leadership in 2015 and never fully embraced President Donald Trump, has given no sign of his future political ambitions.

Trump paid tribute to Ryan as "a truly good man."

"While he will not be seeking re-election, he will leave a legacy of achievement that nobody can question. We are with you Paul!" the president tweeted following the announcement.

Buck said the 48-year-old congressman from Wisconsin was looking forward to spending more time with his young family.

"After nearly 20 years in the House, the speaker is proud of all that has been accomplished and is ready to devote more of his time to being a husband and a father," Buck said.

"While he did not seek the position, he told his colleagues that serving as speaker has been the professional honor of his life, and he thanked them for the trust they placed in him."

Chuck Schumer, the top Democrat in the U.S. Senate, praised Ryan as "a good man who is always true to his word."

He expressed hope that in his remaining time in Congress, Ryan would "break free from the hard-right factions of his caucus that have kept Congress from getting real things done.

"If he's willing to reach across the aisle, he'll find Democrats willing and eager to work with him."

Ryan, a Republican from Janesville, Wisconsin, was first elected to Congress in 1998. Along with Reps. Eric Cantor and Kevin McCarthy, he branded himself a rising "Young Gun" in an aging party.

Ryan was pulled into the leadership job by the abrupt retirement of House Speaker John Boehner in 2015. Boehner had struggled to wrangle the chamber's restless conservative wing and failed to the seal big-picture deals on fiscal policy he sought. Ryan had more trust with the hardliners in the House, but had no more success in brokering fundamental reform of entitlement he sought.

House Majority Leader McCarthy, a Republican from California known to be tighter with Trump, is expected to seeking the speaker post. He will likely compete with House Majority Whip Steve Scalise, of Louisiana, for the job. Both men spoke at the closed-door meeting Wednesday, delivering tributes to Ryan.

In Wisconsin, the most likely Republican candidate is state Assembly Speaker Robin Vos, multiple Republicans in the state said. Vos did not immediately return telephone or text messages.

Another Republican mentioned as a potential candidate is longtime Ryan family friend and Ryan backer Bryan Steil, an attorney and member of the University of Wisconsin Board of Regents. Steil did not immediately return an email seeking comment.

Democrat Randy Bryce, a colorful ironworker who has cultivated an "IronStache" moniker, had been Ryan's best-known challenger, drawing liberal support from around the country. He had nearly $2.3 million in the bank at the end of the first quarter. Janesville teacher Cathy Myers was also running on the Democratic side. The only declared Republican was Paul Nehlen, who was banned from Twitter for a series of posts criticized as racist or anti-Semitic.