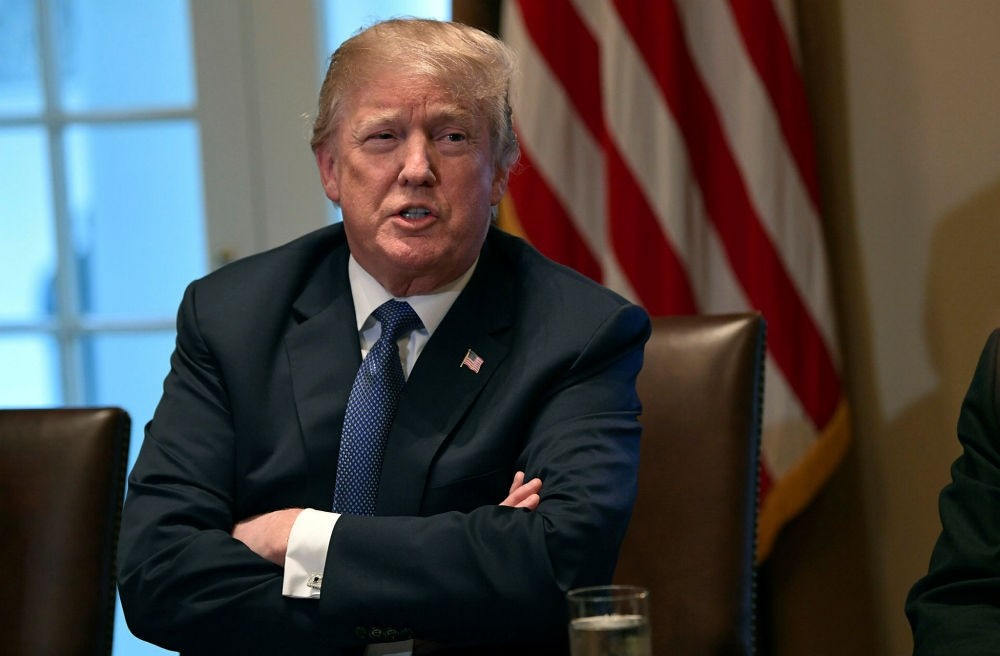 U.S. President Donald Trump speaks in the Cabinet Room of the White House in Washington at the start of a meeting with military leaders, April 9.
by Angelos Berberakis Apr 12, 2018 12:00 am

As part of the investigation looking into President Donald Trump's decade-old alleged one-time sexual relationship Stephanie Clifford, and the larger Robert Mueller probe, the Federal Bureau of Investigation has raided the home and office of one of the president's former lawyers, Michael Cohen, who was involved in the case, in hope of finding incriminating material.

Beyond the political and into the realm of the constitutional, the norm of how such a process usually operated has far been exceeded, prompting the president to fume against the FBI's legally dubious raid, declaring that "Attorney-client privilege is dead!" and calling it a total which hunt.

Clifford, who performs naked in online adult entertainment videos under the name 'Stormy Daniels' claims that she had sexual intercourse with Donald Trump a little over a decade ago and that she was paid $130,000 as 'hush money' just days before the November 8, 2016 United States presidential election race.

The 'hush' payment had allegedly been given to Clifford via Trump's lawyer.

Federal judges had already rejected a motion by Clifford's lawyers to depose both the President and his lawyer about the alleged affair some two weeks ago.

Clifford and her lawyers hadn't been heard from since, despite pledging to file another deposition motion to federal judges; however with the involvement of the FBI into the matter, it's turned Mueller's alleged Russian collusion investigation into a sex scandal probe.

The Mueller probe was started to look into 'potential collusion' between members of the Trump campaign, including Trump himself, and a foreign state, however whether it's been collusion with Russia, misdeeds related to the campaign, tax evasion or even obstruction of justice, the Mueller probe has seemingly hit a wall on all fronts when it comes to Trump himself.

The federal agents had obtained a search warrant with which to have authority to search the premises and confiscate property, however the documents identified in the warrant date back several years.

The search warrant was obtained after agents received a referral from Mueller according to Cohen's own lawyer, Stephen Ryan, who called the search "completely inappropriate and unnecessary," as it does not appear to be related with the probes official goals. The warrant was personally approved by Deputy Attorney General Rod Rosenstein, as opposed to AG Jeff Sessions who has recused himself, but it was carried out by the office of Geoffrey S. Berman, interim U.S. attorney for the southern District of New York, suggesting its subject matter fell outside Mueller's probe.

After more than a year and millions of dollars Donald Trump has not been touched, while those around who were corrupt in one way or another, like Paul Manafort and Michael Flynn, were promptly fired and are now being investigated regarding matters unrelated to Trump or the campaign.

Specifically, Manafort is under investigation by multiple federal agencies, including the FBI since 2014 regarding his business dealings with controversial former Ukrainian President Viktor Yanukovich.

Flynn on the other hand is under federal investigation for dubious conduction of business with foreign governments and companies. He resigned as National Security Advisor not even a month into his tenure due to the fact that this information surfaced, and the fact that he mislead Vice-President Mike Pence regarding the nature and content of his communications with the Russian ambassador to the United States, Sergey Kislyak.

These cases that are years old and mostly do not even directly involve Trump have prompted some to express skepticism regarding the road down which the probe is going.

"I don't think they're partisans," explained Harvard Law School Professor and author Alan Dershowitz. "[but] I think he [Mueller] has lost perspective; I think that h

appens when overzealous prosecutors are given a target."

Dershowitz went on to express his concern that despite the fact that Trump's team of lawyers, including Cohen, were cooperative, the FBI's raid will result in "no cooperation, I think we will now see a Scorched Earth policy on both sides."

The professor also said that he can't imagine the story ending before the mid-term elections coming up in November, and that it will probably drag on for long afterwards in one way or another.

"It's a total witch hunt, I've been saying it for a long time and I've wanted to keep it down. We've given, I believe, over a million pages worth of documents to the [Mueller] special council; they continue to just go forward and here we are talking about Syria, we're talking about a lot of serious things with the greatest fighting force ever [referring to US armed forced] and I have this witch hunt constantly going on for over 12 months now." President Trump commented.

He went on to further criticize the probe, saying that they had found nothing related to Russian collusion on his side but that there was plenty of evidence of wrong doing on his opponents' side, with "lies under oath all over the place, […] e-mails that are acid-washed and deleted, 33,000 e-mails deleted after getting a subpoena for Congress and nobody bothers."