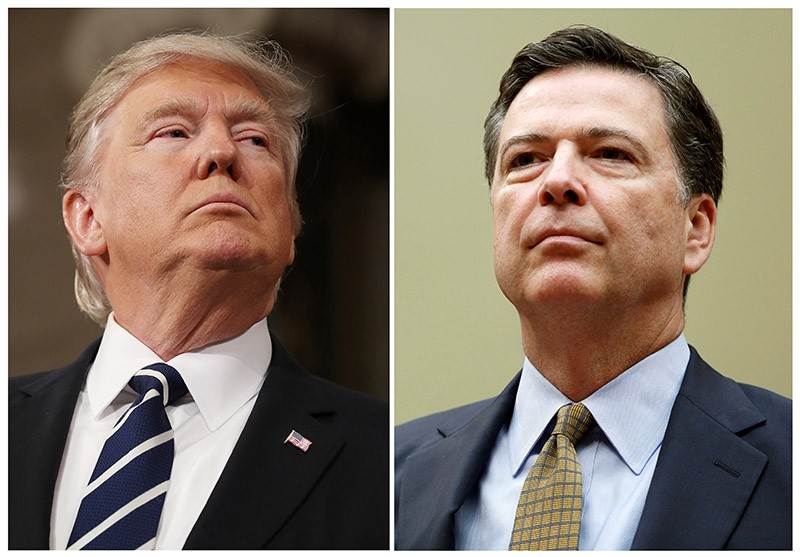 U.S. President Donald Trump attacked former FBI Director James Comey on Friday as a "weak and untruthful slime ball," reacting to news accounts that cite Comey as searingly critical of the president in a memoir due to be published next week.

"It was my great honor to fire James Comey!" Trump said in a series of angry Twitter messages, adding he had been a terrible FBI director.

Trump fired Comey last May and has publicly criticized him since then, but not to this extent.

Comey is doing a series of media interviews before the release of his book, "A Higher Loyalty: Truth, Lies and Leadership," which news organizations have said paints a deeply unflattering picture of the president.

In an interview with ABC broadcast on Friday, Comey discussed his initial encounters last year with the new president, whom he described as volatile, defensive and concerned more about how his own image than about alleged Russian meddling in the 2016 presidential election.

In the first excerpt of the interview, broadcast on "Good Morning America," Comey said he cautioned Trump against ordering an investigation into a salacious intelligence dossier alleging an 2013 encounter with prostitutes in Moscow.

In the book, Comey wrote that Trump raised the intelligence dossier with him at least four times during meetings after Trump took office in January, according to the Washington Post, which obtained a copy.

The dossier was compiled by former British intelligence officer Christopher Steele about Trump's ties to Russia and included an allegation that involved prostitutes.

Comey told ABC that Trump denied the allegations and said he might want the FBI to investigate allegations in the dossier to prove they were not true.

"I said to him, 'Sir that's up to you but you want to be careful about that because it might create a narrative that we're investigating you personally and, second, it's very difficult to prove something didn't happen," Comey said.

Trump was worried there was a chance his wife, Melania Trump, would believe the allegations.

Comey said he told the president the FBI had not proved or disproved the allegations but thought it was important Trump knew about them.

Comey said the allegations in the dossier had not been verified at the time he left the FBI.

Asked how bizarre that meeting with Trump was, Comey said: "Very weird. "Really weird. It was almost an out of body experience for me. I was floating above myself looking down saying 'you're sitting here briefing the incoming president of the United States about prostitutes in Moscow.'"