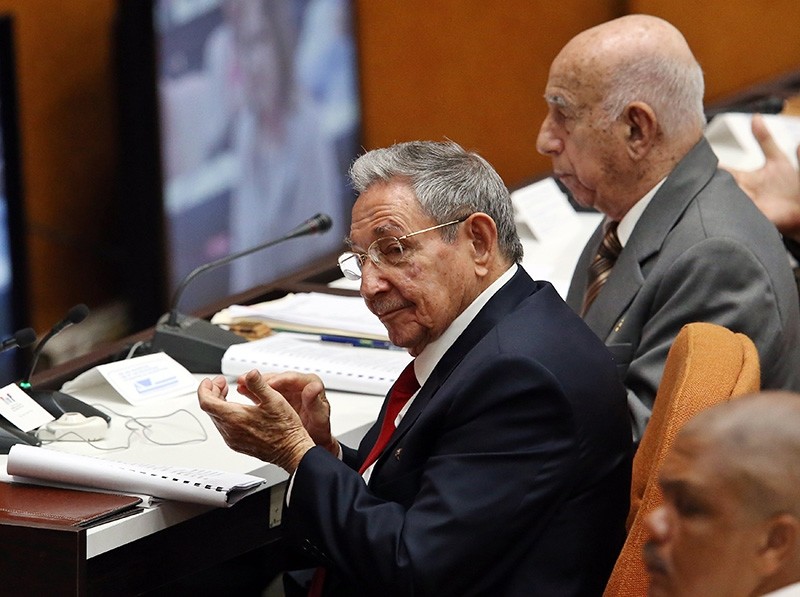 Cuban President Raul Castro (L) attends with the second Secretary of the Communist Party of Cuba, Jose Ramon Machado (R) to the constitutive session of the IX Legislature of the Cuban Parliament, in Havana, Cuba, 18 April 2018. (EPA Photo)
by Compiled from Wire Services Apr 18, 2018 12:00 am

Cuba on Wednesday launched the daylong process of selecting Raul Castro's successor as president of Cuba, the centerpiece of an effort to ensure that the country's single-party system outlasts the aging revolutionaries who created it.

State media said the government would announce Castro's replacement on Thursday, installing someone from outside the Castro family in the country's highest government office for the first time in nearly six decades.

Castro entered the National Assembly just after 9 a.m. accompanied by a broadly smiling Vice President Miguel Diaz-Canel, the man expected to succeed him.

As in Cuba's legislative elections, all of the leaders being voted in on Wednesday are selected by a government-appointed commission. Ballots offer only the option of approving or disapproving the official candidate. Candidates generally receive more than 90 percent of the votes in their favor.

The National Assembly in the past has generally met and selected the president in one day. Its votes are nearly always unanimous and seen as reflecting the will of the country's top leadership.

The 86-year-old Castro is stepping down after two five-year terms. His brother Fidel was prime minister and president from 1959 until he fell ill in 2006. Although Osvaldo Dorticos was president of Cuba during Fidel Castro's time as prime minister, he was considered a figurehead beside the man who led Cuba's revolution, forged its single-party socialist system and ruled by fiat.

Diaz-Canel, 57, has long been seen as the overwhelming favorite to replace Castro, and a series of high-profile appearances on state-run television in recent days have done nothing to change that.

Despite belonging to a post-revolution generation, Diaz-Canel is seen as a man of the regime, who climbed patiently through the Communist Party ranks and was chosen by consensus to succeed Castro.

"I can't conceive of ruptures in our country," he said last year.

The new president will face major challenges, including that of reviving the stagnant economy.

A deepening economic crisis in Cuba's ally, Venezuela, has squeezed Cuba's finances at a time when U.S. President Donald Trump has stepped up economic pressure on the island.

Raul Castro oversaw reforms, including: the expansion of the private sector; legalizing the private sale of homes and cars; and allowing access to personal mobile phone and text messaging services.

The new president will need to cooperate with Castro, who will remain at the helm of the Communist Party and will also wield influence in the army