10 killed, 15 injured as van runs over pedestrians in Canada's Toronto 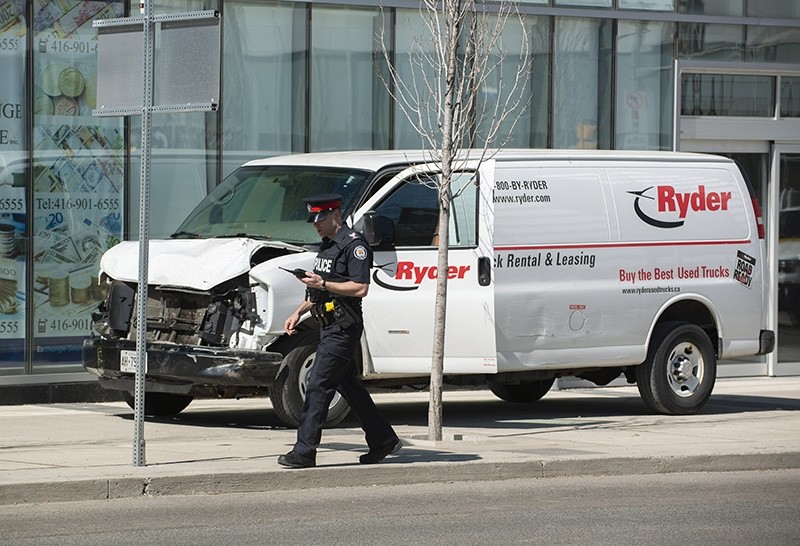 A rented van sits on a sidewalk about a mile from where several pedestrians were injured in northern Toronto, Canada, 23 April 2018. (EPA Photo)
by Daily Sabah with Agencies Apr 23, 2018 12:00 am

A 25-year-old in a rented van plowed down Toronto sidewalk crowded with lunchtime strollers Monday, killing 10 people and injuring 15 in what appeared to witnesses and the city's police chief as a deliberate attack. The driver was quickly arrested in a brief confrontation with officers a few blocks away, and was charged Tuesday with 10 counts of premeditated murder.

Witnesses and the police chief said the driver, identified by authorities as Alek Minassian, was moving fast and appeared to intentionally jump a curb in the North York neighborhood as people filled the sidewalks on a warm afternoon. He continued for more than a mile, knocking out a fire hydrant and leaving bodies strewn in his wake.

Toronto Police Chief Mark Saunders announced Monday night that the initial death toll of nine had risen to 10 after another victim died at a hospital. He said 15 others were hospitalized.

The officer who apprehended Minassian was praised for making a peaceful arrest even as the suspect shouted "Kill me" and claimed to have a gun.

Saunders said Minassian, who lives in the Toronto suburb of Richmond Hill, had not been known to police previously. He attended a high school program there where one classmate remembered him as "absolutely harmless.

Minassian was charged Tuesday with 10 counts of premeditated murder. He stood in the dock at his first court appearance wearing a white prison jumpsuit, his head shaved and his arms behind his back.

He was also charged with multiple counts of attempted murder.

The incident took place in broad daylight around 16 kilometers from a conference center hosting a meeting of G7 ministers, but officials said they had no evidence of a link to the event.

The driver was heading south on busy Yonge Street around 1:30 p.m. and the streets were crowded with people enjoying an unseasonably warm day when the van jumped onto the sidewalk.

Ali Shaker, who was driving near the van at the time, told Canadian broadcast outlet CP24 that the driver appeared to be moving deliberately through the crowd at more than 30 mph.

"He just went on the sidewalk," a distraught Shaker said. "He just started hitting everybody, man. He hit every single person on the sidewalk. Anybody in his way he would hit."

Video broadcast on several Canadian outlets showed police arresting the driver, dressed in dark clothes, after officers surrounded him and his rental Ryder van several blocks from where the incident occurred in the North York neighborhood of northern Toronto. He appeared to make some sort of gesture at the police with an object in his hand just before they ordered him to lie down on the ground and took him away.

Witness Phil Zullo told Canadian Press that he saw police arresting the suspect and people "strewn all over the road" where the incident occurred.

"I must have seen about five, six people being resuscitated by bystanders and by ambulance drivers," Zullo said. "It was awful. Brutal."

Authorities continue to probe details about the driver and his planned attack. Students who attended a Toronto vocational school with Minassian described him as withdrawn and a bit awkward.

The suspect lived with his father in the Toronto suburb of Richmond Hill, and attended Seneca College, according to his LinkedIn social media profile.

Minassian kept mostly to himself at school, and seemed to constantly rub his head or hands -- a sign of obsessive-compulsive disorder (OCD), classmates told local media.

Ari Blaff, one of the students, told public broadcaster CBC that Minassian's behavior "was usually quite strange." But he'd "never noticed anything violent" -- the suspect just "made people feel uneasy around him."

Minassian, who has an imposing physical build, defied a police officer during his arrest.

Wielding an object in his left hand, standing near the van with its front end smashed, the suspect shouted "kill me" to the police officer with his gun drawn, according to an amateur video posted on social media.

The police officer approached the suspect as he knelt and handcuffed him.

The attack shook the usually peaceful streets of Toronto, a multicultural city with a population of 2.8 million. The city recorded 61 murders last year. Downtown Toronto's iconic CN Tower, which is normally lit up in the evening, went dark on Monday evening. The Canadian flag was lowered to half-staff at parliament and at Toronto city hall.

Prime Minister Justin Trudeau expressed his sympathies for those involved.

"We should all feel safe walking in our cities and communities," he said. "We are monitoring this situation closely, and will continue working with our law enforcement partners around the country to ensure the safety and security of all Canadians."

Canada has only rarely been the scene of terror attacks. In October, a man stabbed a police officer in the western city of Edmonton before slamming his van into a group of pedestrians, hurting four people. And in Quebec in October 2014, a Canadian man ran over two soldiers in a parking lot with his car, killing one of them. The driver was shot dead by police when he attacked them with a knife. In March 2016, a Canadian who claimed to have radical sympathies attacked two soldiers at a military recruitment center in Toronto.