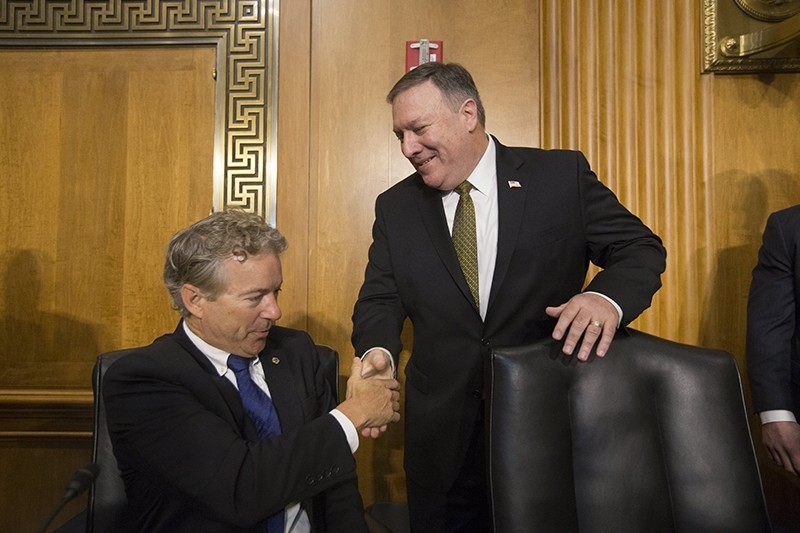 Republican Senator from Kentucky Rand Paul (L) shakes hands with CIA Director Mike Pompeo (R) before the Senate Foreign Relations Committee hearing on the nomination of Pompeo to be Secretary of State, in Washington D.C., April 12, 2018. (EPA Photo)
by Associated Press Apr 24, 2018 12:00 am

Mike Pompeo, President Donald Trump's choice for secretary of state, avoided a rare rebuke Monday as the Senate Foreign Relations Committee narrowly recommended him, but the vote served as a warning shot to the White House as nominees to lead the CIA and Veterans Affairs are hitting stiff resistance.

Pompeo, who's now CIA director, received the panel's approval only after Trump's last-minute overtures to Sen. Rand Paul, R-Ky. Pompeo's nomination now goes to the full Senate, where votes are tallying in his favor and Senate Majority Leader Mitch McConnell said he looks forward to voting to confirm him later this week.

Trump has been quick to fire his top cabinet secretaries, but Senate Democrats are not so fast to confirm replacements. A grilling is expected Wednesday of Ronny Jackson, the White House physician nominated to head the VA, and Pompeo's potential replacement at the CIA, Gina Haspel, is also facing scrutiny.

It's also a reminder of how tough it could be to replace Deputy Attorney General Rod Rosenstein. Trump has publicly mused about firing Rosenstein, who is overseeing special counsel Robert Mueller's investigation into Russian interference in the 2016 election.

"Hard to believe," Trump tweeted Monday about what he called "obstruction." ''The Dems will not approve hundreds of good people... They are maxing out the time on approval process for all, never happened before. Need more Republicans!"

Pompeo's bid to become the nation's top diplomat was in the hands of a few senators, but received a boost Monday when two Democrats, Sen. Joe Manchin of West Virginia and Sen. Joe Donnelly of Indiana, announced their support.

Pressure is mounting on senators from all sides. White House allies are unloading ad campaigns against Democrats from Trump-won states, but progressive groups are pounding senators' offices in opposition. As soon as Sen. Heidi Heitkamp, D-N.D., announced her support for Pompeo, one group called on her to switch.

Ahead of the Foreign Relations Committee's vote, chairman Bob Corker, R-Tenn., said of the full Senate, "It does appear Mike Pompeo has the votes to be secretary of state."

Supporters point to Pompeo's resume as a West Point and Harvard Law School graduate who has the president's confidence, particularly on North Korea. Opponents are focusing on his hawkish foreign policy views and negative comments about gay marriage and Muslims.

Paul's earlier objections to Pompeo, along with overwhelming opposition from Democrats, had set the secretary of state nominee on track to be the first since 1925, when the committee started keeping records, not to receive a favorable recommendation.

But Trump and Paul talked repeatedly, including a chat just moments before the vote.

"I have changed my mind," Paul said, explaining he received reassurances that Pompeo agrees with the president that the Iraq war was a "mistake" and that it is time for U.S. troops to leave Afghanistan. Paul's office said he "got a win" — the promise that Pompeo sides with Trump on those issues — out of the situation, but declined to provide details.

"I want Trump to be Trump," Paul said.

Senators are anxious to have Pompeo in place before international meetings scheduled for later this week and ahead of North Korea talks.

Republicans blamed partisan politics for opposition, saying Pompeo is just as qualified as past secretaries of state nominees Hillary Clinton or John Kerry, both of whom received overwhelming support.

"A majority of Democrats continue their pointless obstruction to score cheap political points with their base as a willful attempt to undermine American diplomacy," said White House spokeswoman Sarah Huckabee Sanders.

But Democrats resisted easy confirmation of the nation's top diplomat, and support peeled.

Sen. Maggie Hassan, D-N.H., who had been among more than a dozen Democrats who supported Pompeo for CIA director, announced her no vote Monday.

"I am concerned that Mr. Pompeo has not demonstrated an understanding that the Secretary of State has an obligation to the American people to stand up for our core values," she said.

Sen. Chris Coons, D-Del., who was among the last Democrats on the foreign relations panel to announce his no vote, said he is concerned that Pompeo "will embolden, rather than moderate or restrain" Trump's "most belligerent and dangerous instincts."

In a late setback Monday, the panel was short one Republican vote needed for a favorable recommendation because Sen. Johnny Isakson was delivering a eulogy in his home state of Georgia. Rather than postpone voting until his return very late Monday, Coons agreed to allowed his vote to be recorded as "present" so the committee could finish its work.