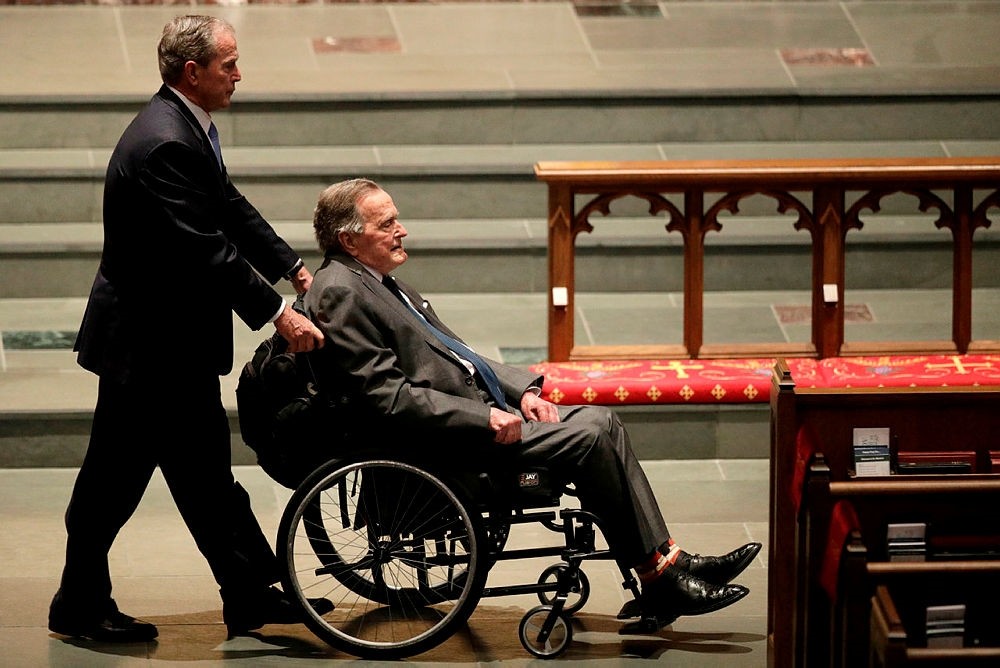 Former U.S. president George H.W. Bush was being treated for a blood infection on Monday, one day after his wife Barbara's funeral, his office said.

A statement stressed that Bush, 93, was responding to treatment. He was admitted to Houston Methodist Hospital early Sunday, just a day after bidding a final farewell to his wife of 73 years during a funeral in the same Texas city. Barbara Bush had died on Tuesday.

The 41st president greeted and shook hands with numerous attendees of the event during the invitation-only funeral attended by four former presidents, including himself and his son George W. Bush.

More than a thousand people attended the ceremony.

"I always knew Barbara was the most beloved woman in the world, and in fact I used to tease her that I had a complex about that fact," Bush said after his wife's passing.

Their marriage was the longest presidential union in American history.

He married her while on leave from military deployment in 1945, several months before World War II ended.

Bush, who suffers from Parkinson's disease and is wheelchair-bound as a result, has been repeatedly hospitalized for pneumonia. His is a less-common version of Parkinson's that only affects the lower body.

"President Bush was admitted to Houston Methodist Hospital yesterday morning after contracting an infection that spread to his blood," a statement read.

"He is responding to treatments and appears to be recovering. We will issue additional updates as events warrant."

George Herbert Walker Bush was born June 12, 1924 in Milton, Massachusetts to a wealthy New England political dynasty, the son of Prescott Bush, a successful banker and US Senator for Connecticut.

Bush had a pampered upbringing and attended the prestigious Phillips Academy in Andover, but delayed his acceptance to Yale in order to enlist in the Navy on his 18th birthday and head off to World War II.

He went on to fly 58 combat missions during the war. He was shot down over the Pacific by Japanese anti-aircraft fire and rescued by a submarine after huddling in a life raft for four hours while enemy aircraft circled.

The war veteran and former CIA chief suffered the ignominy of being a one-term president, but led a political dynasty that would win back the White House eight years later, albeit with a leader with a very different approach.

A foreign policy realist who navigated the turbulent fall of the Soviet Union in 1989, he assembled an unprecedented coalition to defeat Saddam Hussein two years later.

But he also presided over a period of economic malaise and infuriated his fellow Republicans during a budget battle with rival Democrats by famously breaking his vow: "Read my lips: no new taxes."

After retiring from public life, Bush fulfilled a wartime pledge to one day jump out of a plane for fun and famously went skydiving on his 75th, 80th and 85th birthdays.

Bush, who served as commander-in-chief from 1989 to 1993, is the oldest of the five living former US presidents.

He is father to ex-president George W. Bush (2001-2009) and former Florida governor Jeb Bush, who was a contender in the 2016 Republican presidential primaries.