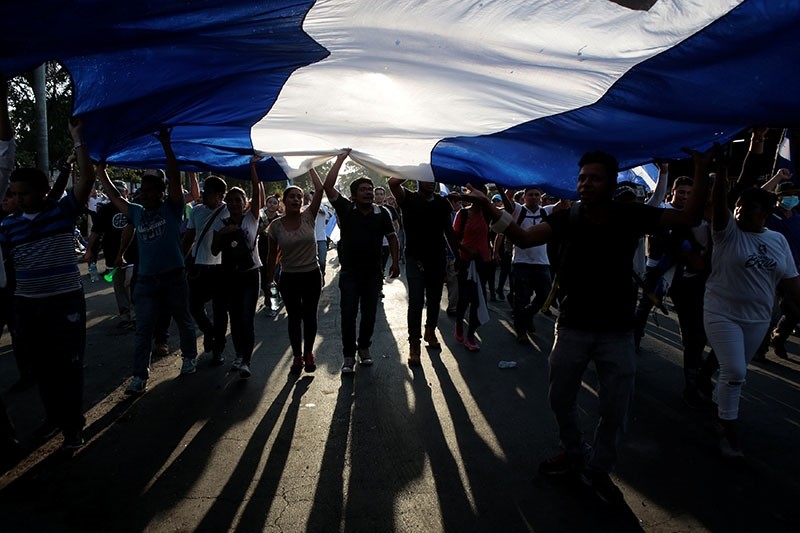 Demonstrators hold up a large Nicaraguan flag during a protest against police violence and the government of Nicaraguan President Daniel Ortega in Managua, Nicaragua April 23, 2018. (Reuters Photo)
by Daily Sabah with AFP Apr 24, 2018 12:00 am

The United Nations called Tuesday on Nicaragua to investigate a crackdown on protests that have left at least 27 dead, saying that a number of the killings may have been "unlawful."

"We are particularly concerned that a number of these deaths may amount to unlawful killings," Liz Throssel of the Geneva-based U.N. rights office told reporters.

"We call on the Nicaraguan authorities to ensure that there are prompt, thorough, independent and transparent investigations into these deaths," the spokeswoman added.

The U.N. said at least 25 people, including a police officer, had been killed in the unrest as of Sunday.

But the Nicaraguan Center for Human Rights has given a death toll of 26 since last Wednesday when the pension reforms were unveiled, including a Nicaraguan journalist shot in the head while covering the chaos in a city on the country's Caribbean coast.

Murillo added another death to the count on Monday, saying a police officer succumbed to fatal injuries sustained in Sunday's protests.

"It is essential that all allegations of excessive use of force by police and other security forces are effectively investigated to ensure those responsible are held to account," Throssel said.

"We are also concerned at reports that dozens of people have been injured or detained over the past few days," she said, adding that "there should also be investigations into acts of violence, including looting, allegedly committed during the protests."

The protests have taken root across the country, airing long-simmering grievances over political stagnation, economic issues and the authoritarian style of Ortega, a former Marxist rebel who has ruled Nicaragua for 22 of the past 39 years.

Students have led the street protests that have degenerated into stone-throwing clashes with police firing weapons, while other groups, including workers, pensioners and ordinary residents, have also made their voices heard.

The Vatican, the United States and the European Union have also condemned the violence gripping the country, and the U.S. state department ordered relatives of U.S. Embassy staff out of the country Monday.

On Sunday Ortega canceled the pension reform, and has offered to hold talks to calm the street tensions. Murillo on Monday promised to have arrested protesters freed.

But so far they have refused to bow to demands to rein in the police. Street protests are extremely rare in Nicaragua, where the army maintains a very tight grip on public order.

The crumbling support complicates Ortega's strategy of wielding power, which involved left-wing rhetoric recalling his past as a Sandinista rebel leader coupled with business-friendly policies.

Under his watch, Nicaragua has avoided the crime plague seen in northern Central American countries where gangs are rife. It has also put in solid economic growth, yet it remains one of the poorest nations in Latin America.

The pension reform was aimed at reducing a fast-growing $76 million deficit in the Nicaraguan Social Security Institute (INSS), which is projected to run out of money as early as next year on its current path.

The discarded changes would have increased both employer and employee contributions and reduced benefits.

Even though that reform has been taken off the table, Ortega is still facing a reckoning, the target of public anger that, now unleashed, is showing no signs of diminishing.