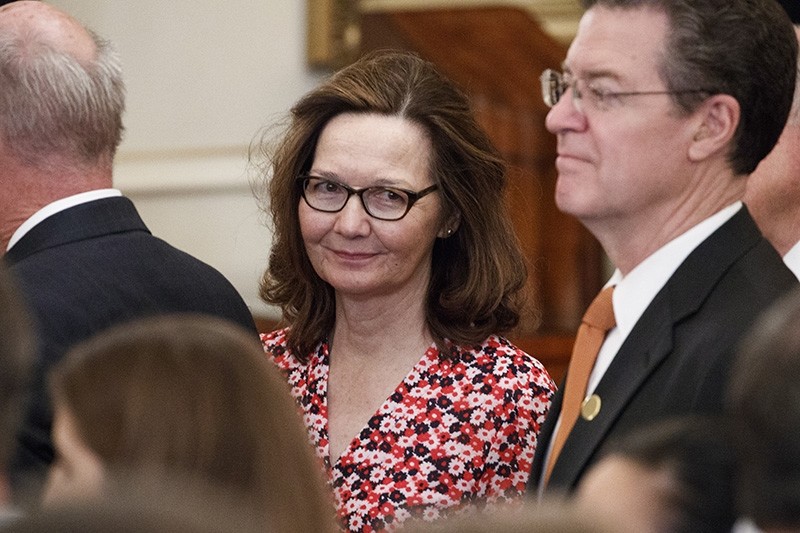 CIA Director nominee Gina Haspel attends the ceremonial swearing in ceremony for US Secretary of State Mike Pompeo at the State Department in Washington, DC, May 2, 2018. (EPA Photo)
by Daily Sabah with AP May 07, 2018 12:00 am

President Donald Trump on Monday defended Gina Haspel, his nominee to head the Central Intelligence Agency, dismissing debate over her involvement in a harsh interrogation program and arguing Democrats want her out because she "is too tough on terror."

Trump said on Twitter that Haspel has "come under fire because she was too tough on Terrorists." He added that "in these very dangerous times, we have the most qualified person, a woman, who Democrats want OUT because she is too tough on terror. Win Gina!"

Haspel offered to withdraw her nomination, two senior administration officials said Sunday, amid concerns that a debate over a harsh interrogation program would tarnish her reputation and that of the CIA.

White House aides on Friday sought out additional details about Haspel's involvement in the CIA's now-defunct program of detaining and brutally interrogating terror suspects after 9/11 as they prepared her for Wednesday's confirmation hearing. This is when she offered to withdraw, the officials said.

They said Haspel, who is the acting director of the CIA, was reassured that her nomination was still on track and will not withdraw. The officials spoke on the condition of anonymity to discuss internal deliberations. The news was first reported Sunday by The Washington Post.

Haspel, who would be the first woman to lead the CIA, is the first career operations officer to be nominated to lead the agency in decades.Haspel's nomination has encountered opposition over her role in a now-defunct program in which the agency detained and interrogated al-Qaeda suspects in secret prisons overseas using techniques widely condemned as torture.

She has told lawmakers in recent weeks that she would stand firm against any effort to restart the brutal detention and interrogation program, administration officials told The Associated Press on Friday. She is expected to reiterate that publicly this week.

Haspel, one official said, was wary of suffering the same fate as failed veterans affairs nominee Ronny Jackson and of dredging up the CIA's troubled past. She took over last month as the acting CIA director after the previous director, Mike Pompeo, was sworn in as secretary of state.

After Haspel's offer to withdraw, White House aides worked to reassure her that she had the president's support.

As with other nominations, this one hit a roadblock but is back on track, said a third administration official familiar with the effort to get her confirmed.

Haspel's conversations with senators continue ahead of Wednesday's confirmation hearing at the Senate Intelligence Committee and a later full vote in the Senate.

In addition, the CIA has sent materials to the Senate, some classified, that the lawmakers can read to better understand not only her work in the Counterterrorism Center, which oversaw the harsh interrogation program, but also other aspects of her 33-year career, including more than 30 years undercover.

She has received robust backing from former intelligence, diplomatic, military and national security officials, who praise her extensive intelligence career.

On the opposing side are groups such as the American Civil Liberties Union, which says she should have stood up against the interrogation practices then.

Raj Shah, a White House spokesman, on Sunday called Haspel a highly qualified nominee. "Her nomination will not be derailed by partisan critics who side with the ACLU over the CIA on how to keep the American people safe," he said.

Many details of Haspel's work remain classified. Sources familiar with her career who requested anonymity said that at one point she was the chief of the CIA station in a country where harsh interrogations were used on at least one terrorism suspect.

Later, she served as chief of staff to Jose Rodriguez, the head of CIA undercover operations. In consultation with Rodriguez in 2005, Haspel drafted a cable ordering CIA officers to destroy videotapes of al-Qaeda suspects being tortured.

Haspel's supporters argue that while she drafted the cable, Rodriguez sent it without the approval of CIA Director Porter Goss and without informing Haspel that he would do so.

The destruction of the tapes is a key issue for Senate critics of Haspel, who complain that public agency disclosures regarding its interrogation programs have been inadequate.