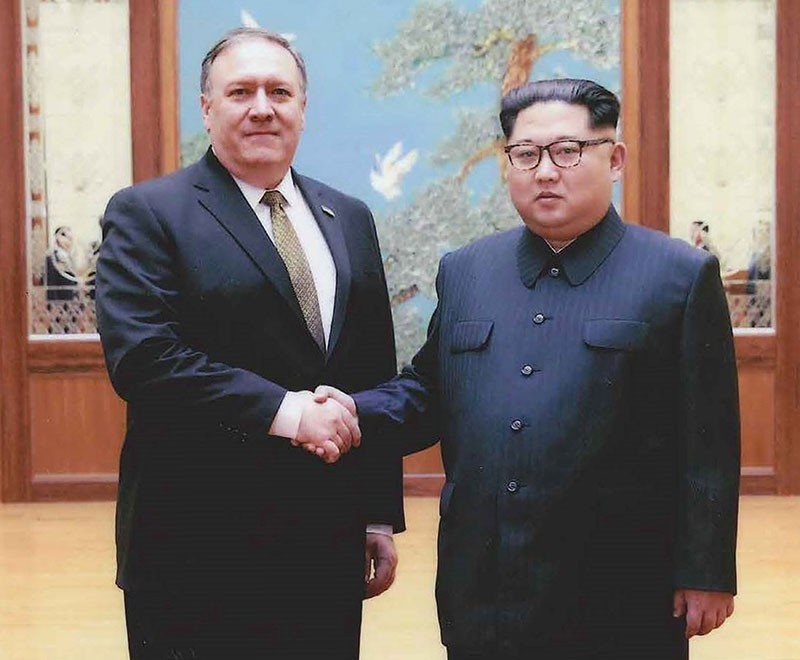 Welcoming the three Americans at a military base outside Washington, Trump says of Kim, "I really think he wants to do something."

He adds of the talks between his administration and the North Korean government, "It's never been taken this far."

Trump says he will not disclose whether he will have any personal conversations with Kim as they prepare for their historic summit in the coming weeks.

I am pleased to inform you that Secretary of State Mike Pompeo is in the air and on his way back from North Korea with the 3 wonderful gentlemen that everyone is looking so forward to meeting. They seem to be in good health. Also, good meeting with Kim Jong Un. Date & Place set.

Secretary Pompeo and his "guests" will be landing at Andrews Air Force Base at 2:00 A.M. in the morning. I will be there to greet them. Very exciting!

"I am pleased to inform you that Secretary of State Mike Pompeo is in the air and on his way back from North Korea with the 3 wonderful gentlemen that everyone is looking so forward to meeting. They seem to be in good health," Trump wrote in a post on Twitter.

Trump said he will greet Pompeo and the Americans when they land at Andrews Air Force Base outside Washington at 2 a.m. EDT (0600 GMT) Thursday morning. "Very exciting!" he wrote on Twitter.

The fate of Korean-Americans Kim Hak-song, Tony Kim and Kim Dong-chul had been among a number of delicate issues in the run-up to the first-ever meeting of U.S. and North Korean leaders.

Trump sent Pompeo to Pyongyang to accompany the men home following U.S. calls for Kim to free them as a gesture of goodwill and sincerity before the U.S.-North Korea meeting, which is expected to take place in late May or early June.

"In order to reinforce reconciliation between South Korea and North Korea and to spread peace on the Korean peninsula, we wish for a swift repatriation of South Korean detainees," Yoon said in a statement.

Following a year of threats that raised fears of a new conflict, the two Koreas bring an official end to the Korean War and pledge to work toward denuclearization. Last month, the North's leader Kim Jong Un and the South's President Moon Jae-in embraced after signing what they called the Panmunjom Declaration, following a day that began with an emotional handshake over the Military Demarcation Line that splits their countries.