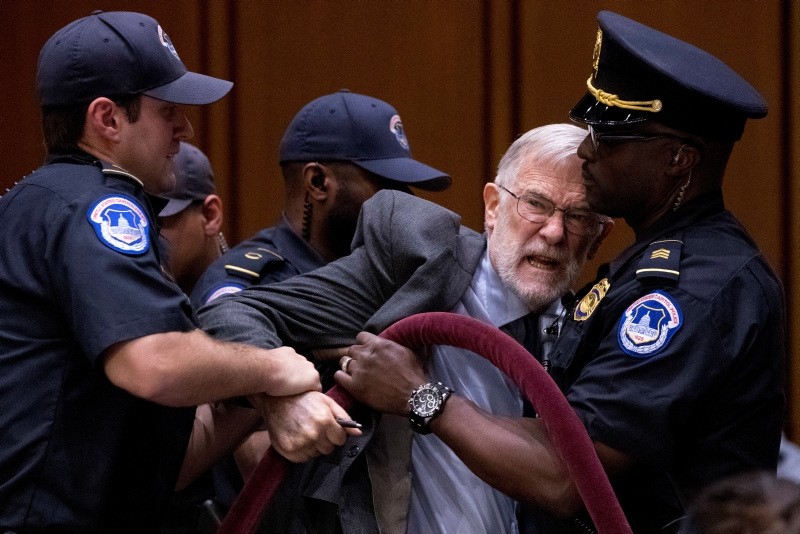 A former CIA analyst was dragged out Wednesday from a U.S. Senate hearing after protesting President Donald Trump's pick to lead the Central Intelligence Agency.

The 79-year-old activist, who was identified as Ray McGovern, was later charged with resisting arrest and unlawfully disrupting the meeting, and pleaded not guilty.

"I wish you wouldn't beat up an old man," McGovern was heard saying to the police, who repeatedly urged him to stop resisting.

"I'm not resisting. No I'm not. I'm laying on the ground," he told the police, adding that he believed his left arm was dislocated.

A bystander warned the police to "stop hurting him," a video from the incident showed. "Shame on you for hurting him. This is unnecessarily excessive," another one said.

McGovern reportedly worked for 27 years as a CIA operative in various capacities before retiring.

The woman, who continued to shout at Haspel, was immediately escorted out of the building after Senate Intelligence Chairman Richard Burr asked for help from the police.

Burr later threatened the remaining participants with "removing all individuals" from the hearing if "there are any other further disruptions."

Ahead of the confirmation hearing, similar protests were organized with several people being placed under arrest and forcibly dragged out of the building.

"Stop the torture" was the most heard chant, while one woman accused police officers of being a "torturer just like Haspel."

Meanwhile, Haspel promised during the hearing that she would not bring back the spy agency's much-debated interrogation program.

"I can offer you my personal commitment, clearly and without reservation, that under my leadership, on my watch, the CIA will not restart a detention and interrogation program," she said.