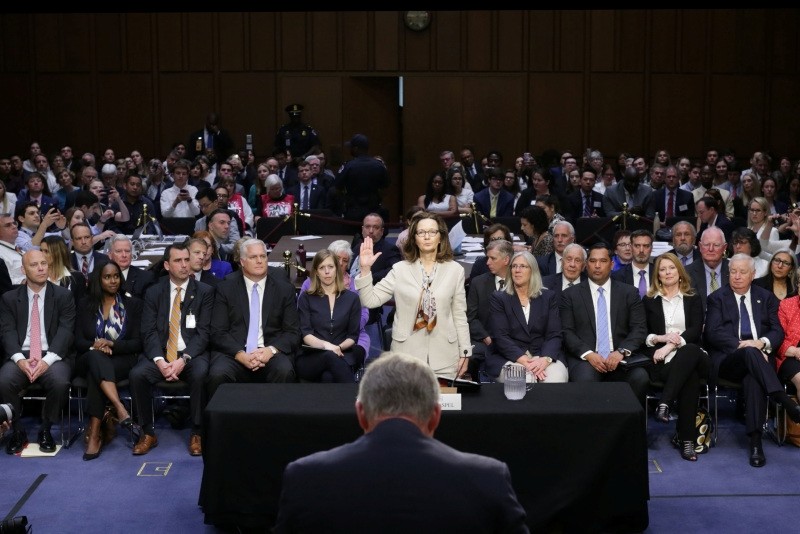 Gina Haspel is sworn-in before testifying to the Senate Intelligence Committee on her nomination to be the next CIA director in the Hart Senate Office Building on Capitol Hill in Washington, DC on May 9, 2018. (AFP Photo)
by Associated Press May 15, 2018 12:00 am

President Donald Trump's CIA nominee appeared to be on a path toward confirmation as she picked up support from key Democrats Tuesday and toughened her public stance against harsh interrogation.

"With the benefit of hindsight and my experience as a senior agency leader, the enhanced interrogation program is not one the CIA should have undertaken," Gina Haspel said in written answers to more than 60 questions released by the Senate intelligence committee.

Haspel, who was involved in supervising a secret CIA detention site in Thailand, wrote that she had learned "hard lessons since 9/11." In comments aimed at clarifying her position on now-banned torture techniques, Haspel said she would "refuse to undertake any proposed activity that is contrary to my moral and ethical values."

The Senate intelligence committee is expected to vote Wednesday to recommend that the full Senate confirm her.

Confirmation by the full Senate appeared likely as four Democrats — Mark Warner of Virginia, Joe Manchin of West Virginia, Joe Donnelley of Indiana and Heidi Heitkamp of North Dakota — announced their support. The only Senate Republicans who are not expected to vote for her are Kentucky's Rand Paul and Arizona's John McCain, who is battling cancer.

In announcing his support Tuesday, Warner, the top Democrat on the intelligence committee, said Haspel has been "professional and forthright" with the panel. "Most importantly, I believe she is someone who can and will stand up to the president if ordered to do something illegal or immoral — like a return to torture," Warner said.

Haspel testified at a Senate hearing that torture does not work as an interrogation technique and that, as director, her strong "moral compass" would ensure she did not carry out any administrative directive she found objectionable. Her written answers to questions went further to underscore her opposition to any attempt to reinstate harsh interrogation of suspects.

McCain, who was beaten as a prisoner of war during the Vietnam War, has urged colleagues to reject the nominee over her past role in CIA interrogations. After the hearing, McCain issued a statement calling Haspel a patriot for her three decades of service to the CIA. Still, McCain said her role "in overseeing the use of torture by Americans is disturbing. Her refusal to acknowledge torture's immorality is disqualifying."

In announcing her support, Heitkamp said it was not an easy decision.

"Ms. Haspel's involvement in torture is deeply troubling, as my friend and colleague, John McCain, so eloquently reminded us," Heitkamp said. "However, Ms. Haspel explained to me that the agency should not have employed such tactics in the past and has assured me that it will not do so in the future."

Trump himself has said the country should consider resuming the use of the so-called enhanced interrogation techniques. And former Vice President Dick Cheney, who was integral to the post-Sept. 11, 2001, strategy, said last week if it were up to him, "I'd do it again."