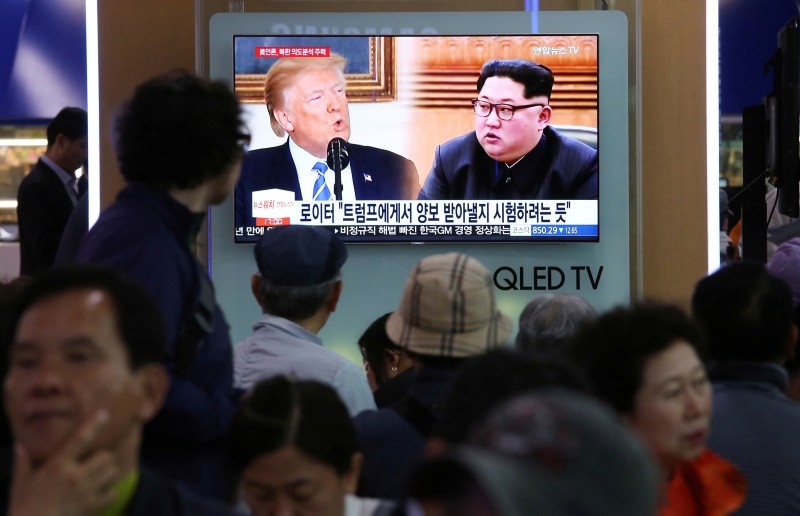 "We're still hopeful that the meeting will take place, and we'll continue down that path," spokeswoman Sarah Sanders told U.S. broadcaster Fox News. "But at the same time, we've been prepared that these could be tough negotiations."

Trump is "ready if the meeting takes place, and if it doesn't, we'll continue the maximum pressure campaign that's been ongoing," Sanders said.

"Nothing has changed on our end," she told reporters later in the day. "This was an invitation that North Korea offered, and that we've accepted, and we're continuing to move forward in those preparations."

North Korea canceled high-level talks scheduled for Wednesday with South Korea due to the ongoing so-called Max Thunder drills being conducted by Washington and Seoul.

The United States and South Korea say the drills are purely defensive, but North Korea's leadership described he maneuvers as a "military provocation running counter to the positive political development on the Korean peninsula," North Korean news agency KCNA reported.

A top North Korean official threatened to cancel the summit - scheduled for June 12 in Singapore - if the U.S. insisted that North Korea completely abandon its nuclear weapons program.

"If the US is trying to drive us into a corner to force our unilateral nuclear abandonment, we will no longer be interested in such dialogue and cannot but reconsider our proceeding to the US summit," said Kim Kye Gwan, vice minister of foreign affairs, according to KCNA.

Meanwhile, Trump said the U.S. hasn't been notified about the North Korean threat.

"We haven't seen anything. We haven't heard anything. We will see what happens," he said as he welcomed the president of Uzbekistan to the White House.

In Washington, the U.S. State Department emphasized that Kim had previously indicated he understood the need and purpose of the U.S. continuing its long-planned exercises with South Korea. State Department spokeswoman Heather Nauert said the U.S. had not heard anything directly from North or South Korea that would change that.

"We will continue to go ahead and plan the meeting between President Trump and Kim Jong Un," Nauert said.

U.S. Army Col. Rob Manning said the current exercise is part of the U.S. and South Korea's "routine, annual training program to maintain a foundation of military readiness." Manning, a Pentagon spokesman, said the purpose of Max Thunder and exercise Foal Eagle — another training event — is to enhance the two nations' abilities to operate together to defend South Korea.

"The defensive nature of these combined exercises has been clear for many decades and has not changed," Manning said.

Earlier, the Chinese Foreign Ministry said the meeting would be an "important opportunity" for peace on the Korean Peninsula.

"All parties concerned, especially North Korea and the United States, should meet each other halfway, show kindness and sincerity to each other, and together create favorable conditions and atmosphere for the leaders' meeting," ministry spokesman Lu Kang said.

U.N. Secretary General Antonio Guterres, meeting European Union officials in Brussels, said he hoped "that in the end common sense will prevail, and the summit will take place and it will be successful."

At the United Nations in New York, Ambassador Karel van Osterom of the Netherlands, chairman of the U.N. Security Council's North Korea sanctions committee, said he remained optimistic for talks with Pyongyang.

"The road ahead will have bumps, and I think we're hitting one of the bumps at the moment," he said. "But we are hopeful that the road will lead to a solution we all hope for."

Wednesday's high-level talks between Pyongyang and Seoul were intended as a follow-up to last month's meeting in which Kim and South Korean President Moon Jae In agreed to work towards a permanent peace treaty and the elimination of nuclear weapons on the peninsula.

Although the meeting between the two countries - technically at war for more than six decades - was hailed as a breakthrough, skepticism about the North's commitment to denuclearization has flourished, given Pyongyang's abandonment of similar agreements in the past.