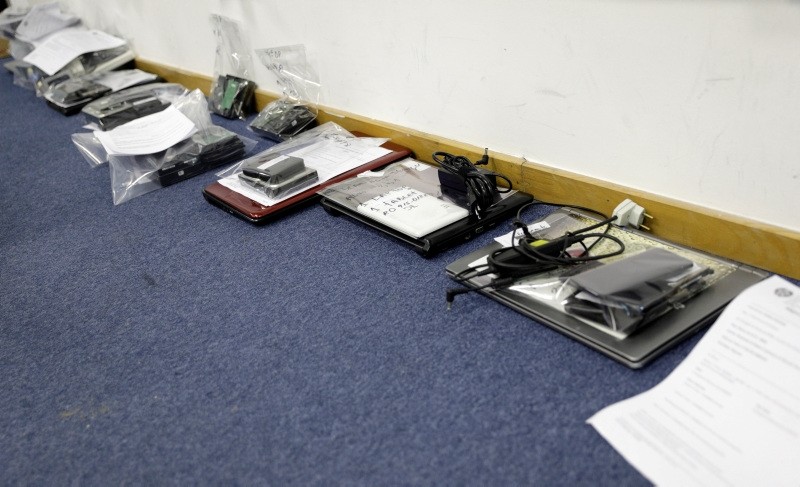 Computers and hard drives seized during operation against pedophilia, are seen at police station in Rio de Janeiro, Brazil May 17, 2018. (REUTERS Photo)
by Associated Press May 17, 2018 12:00 am

Brazilian police arrested more than 250 people Thursday as they executed hundreds of search and seizure warrants for child pornography in the largest operation of its kind in the Latin American country.

Thousands of police fanned out in 24 states and the federal district to serve more than 500 warrants, the Ministry of Public Security said. During the searches, police detained people they said were in possession of or were sharing child pornography. By evening, 251 people had been taken into custody.

"This is without a doubt one of the most reprehensible, one of the most intolerable crimes against our children and adolescents," he said at a news conference. "Because of this, within the law, we will be unrelenting in combatting it. We will not stop here."

Investigators analyzed more than 1 million files in order to identify the targets of Thursday's operation, Jungmann said. Last year, American authorities shared with Brazilian investigators tools and methods for identifying such files online, according to Carlos Afonso Goncalves, the director of intelligence at the National Secretariat of Public Security.

The targets of the investigation all had "considerable quantities" of electronic files containing images of child pornography in their possession, said Alessandro Barreto, coordinator of the cybercrimes lab at the secretariat. The smallest number of downloaded files was 150.