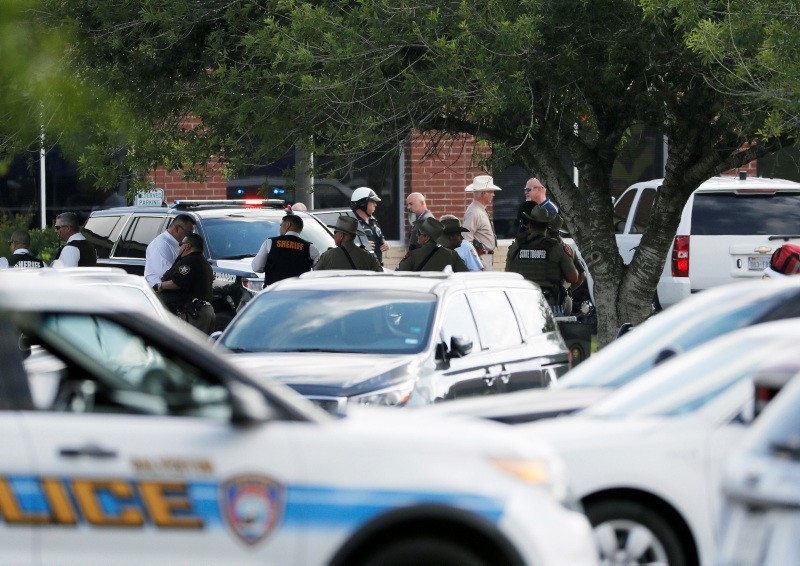 Emergency responders from multiple agencies work at the scene in front of Santa Fe High School in response to a shooting on Friday, May 18, 2018 (AP Photo)
by Compiled from Wire Services
May 18, 2018 12:00 am

At least 10 people were killed Friday in a shooting at a high school in Texas, U.S. media reported, as President Donald Trump said the situation was "not looking good."

Texas Gov. Greg Abbott said 10 people were killed and 10 others were wounded after the shooting at a high school in the town of Santa Fe.

Abbott called Friday's shooting "one of the most heinous attacks that we've ever seen in the history of Texas schools."

He said explosive devices including a molotov cocktail that had been found in the suspected shooter's home and a vehicle as well as around the school and nearby.

The governor says the suspect said he originally intended to commit suicide but gave himself up and told authorities that he didn't have the courage to take his own life.

Abbott said there are "one or two" other people of interest being interviewed about the shooting.

The sheriff of Harris County, Ed Gonzalez tweeted: "One is in custody, a second one detained. An injured police officer is being treated, the extent of his injuries are unknown."

Earlier, the school assistant principal, Cris Richardson, told CNN that one suspect was in custody.

"This morning, an incident occurred at the high school involving an active shooter. The situation is active but has been contained. There have been confirmed injuries," the Santa Fe school district said in a statement.

"Law enforcement will continue to secure the building and initiate all emergency management protocols to release and move students to another location."

Other schools in the district were not affected, it added.

"There was someone that walked in with a shotgun and started shooting, and this girl got shot in the leg," an eyewitness identified as Nikki told local television station KTRK.

The shooting was the latest in what has become an all-too-familiar situation in American schools, with shootings a near-daily occurrence.

Earlier this year, 17 students and staff were killed in a shooting at a Florida high school -- a massacre that prompted survivors to launch a grassroots campaign against gun violence.

In Texas, the eyewitness, Nikki, said students fled the school in a panic, and several other students told local media they heard multiple gunshots.

Parent Richard Allen told KTRK he arrived at the school soon after the shooting and reported seeing a number of victims being taken away in ambulances.

"My son said someone went into the art room and started shooting a lot of the kids," Allen said.

Student Paige Curry told local media that she heard gunshots and then a fire alarm, after which students were taken out by teachers to a nearby gas station.

"I saw some girl -- she had, you know, she got shot in the kneecap, I guess. So she had a bandage around it. She was limping and then the firemen came and got her," another student, who gave his first name as Tyler, told CBS.

A large contingent of police as well as agents from the Bureau of Alcohol, Tobacco, Firearms and Explosives were responding to the incident.

Television footage showed students being led out of the school.

Some students were evacuated to a nearby auto shop, where parents were picking up their children, according to KHOU TV.