Plane with 110 aboard crashes after takeoff from Havana, only 3 survivors 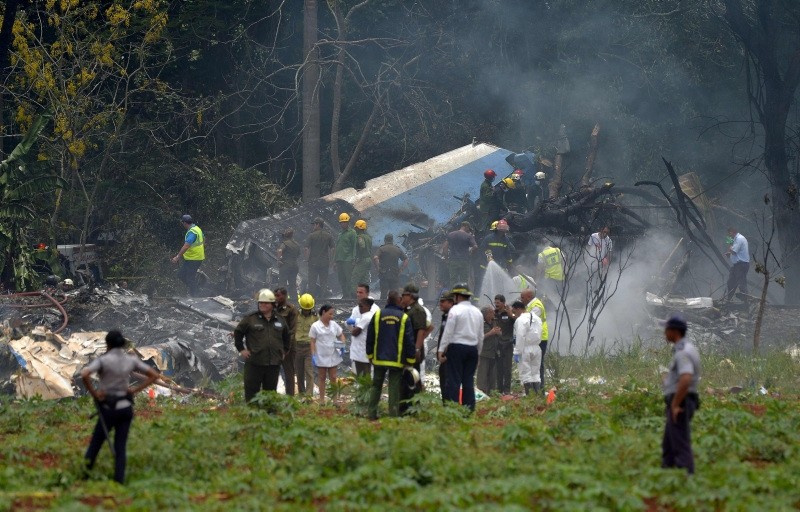 Picture taken at the scene of the accident after a Cubana de Aviacion aircraft crashed after taking off from Havana's Jose Marti airport on May 18, 2018 (AFP Photo)
by Compiled from Wire Services May 18, 2018 12:00 am

Cuba began two days of national mourning Saturday for victims of the crash of a state airways plane that killed all but three of its 110 passengers and crew.

President Miguel Diaz-Canel said an investigation was under way into Friday's crash of the nearly 40-year-old Boeing 737, leased to the national carrier Cubana de Aviacion by a Mexican company.

Three women pulled alive from the mangled wreckage are the only known survivors.

The Boeing crashed shortly after taking off from Jose Marti airport, coming down in a field near the airport and sending a thick column of acrid smoke into the air.

The mourning period is to last from dawn on Saturday to midnight on Sunday, the Communist Party leader and former president Raul Castro said. Flags are to be flown at half-mast throughout the country.

The plane was on an internal flight from Havana to the eastern city of Holguin. Most of the passengers were Cuban, with five foreigners, including two Argentines, among them.

The plane -- carrying 104 passengers -- was almost completely destroyed in the crash and subsequent fire. Firefighters raced to the scene to put out the blaze along with a fleet of ambulances to assist any survivors.

What appeared to be one of the wings of the plane was wedged among scorched tree trunks, but the main fuselage was almost entirely destroyed.

Built in 1979, the plane was leased from a small Mexican company, Global Air, also known as Aerolineas Damoj.

Mexico said it was sending two civil aviation specialists to help in the investigation. The six crew members were Mexican nationals.

Boeing issued a statement saying that a "technical team stands ready to assist" and offering condolences to friends and relatives of the victims.

The 58-year-old Diaz-Canel, who succeeded Castro as the communist island's leader only last month, appeared aghast as he surveyed the recovery efforts, wearing a short-sleeved shirt and surrounded by officials.

Castro sent his condolences to families bereaved in the "catastrophic accident," a statement read, as Russian President Vladimir Putin and a string of Latin American leaders also expressed sympathy.

Pope Francis asked the church in Cuba to convey condolences to families "who mourn the unexpected disappearance of loved ones."

'The explosion shook everything'

From the supermarket where he works near the airport, Jose Luis, 49, said he could see the plane taking off before it banked and plunged to the ground.

"I saw it taking off. All of a sudden, it made a turn, and went down. We were all amazed," he said.

Yasniel Diaz, a 21-year-old musician, said the pilot appeared to attempt an emergency landing, but crashed instead.

"The explosion shook everything," he said.

"I started running, I was so afraid."

Global Air said the plane was flying with a crew of six Mexicans -- the pilot, co-pilot, three flight attendants and a maintenance technician.

In Mexico City, anguished relatives and colleagues of the crew gathered outside the company's offices demanding information -- some of them hugging and crying.

"I was friends with the captain, with the co-pilot, with the head flight attendant," said a former Global Air employee, 44-year-old Ana Marlene Covarrubias.

"When I heard the news on the phone, I thought it was one of those jokes people play," she told AFP.

The Mexican communications and transportation ministry said the plane was built in 1979. Global Air had the necessary permits to lease it, and had passed inspections in November last year, it said.

Prior to Friday's crash, Cuba's most recent air accident occurred in April 2017, when eight military personnel died when a Russian-made AN-26 transport aircraft went down in western Cuba.

The country's last major airline disaster was in November 2010 when a Cuban Aerocaribbean jet crashed on a flight from Santiago de Cuba to Havana, killing all 68 people on board, including 28 foreigners.