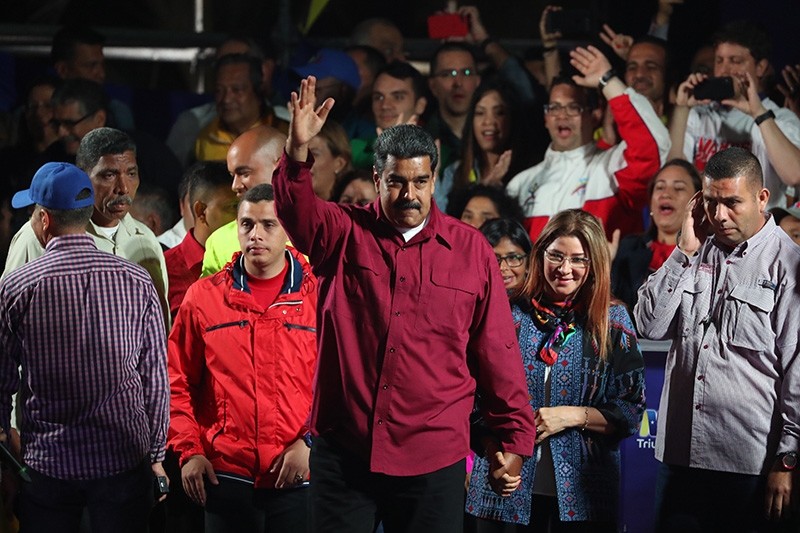 Venezuelan President Nicolas Maduro (C) jubilates his victory with First Lady Cilia Flores (C-R) after the publication of the electoral results in Caracas, Venezuela, May 20, 2018. (EPA Photo)
by Daily Sabah with Agencies
May 20, 2018 12:00 am

Socialist incumbent Nicolas Maduro won Venezuela's presidential election by a landslide, as the opposition rejected results of the vote marred by irregularities and mass absenteeism.

The National Election Council announced that with more than 92 percent of polling stations reporting, Maduro won nearly 68 percent of the votes Sunday, beating his nearest challenger Henri Falcon by more than 40 points.

Turnout Sunday was around 46 percent — the lowest in a presidential race in two decades of revolution. About 20.5 million people were eligible to vote, but many analysts predicted a low turnout after the opposition alliance Democratic Unity Roundtable (MUD) called on voters to boycott the poll.

Maduro spoke late Sunday to a crowd of cheering supporters at Venezuela's presidential palace in the capital of Caracas, while urging the opposition to join him in a dialogue.

He promised to spend the next two years before scheduled congressional elections repairing an economy he says has been badly damaged by mafias backed by Colombia and the U.S.

He also slammed his challenger Falcon, who like him was an acolyte of Chavez, saying he had never seen a candidate dispute results before they were even announced. "Sooner or later, they all break in the face of threats from the imperialists," he said, pleading with the U.S. to reconsider its belligerence.

As the results were being announced, residents of downtown Caracas just a few blocks from where Maduro supporters were celebrating banged on pots and pans in protest. Falcon accused the government of buying votes and dirty tricks to boost turnout among poor voters most hurt by widespread food shortages and hyperinflation in what was once Latin America's wealthiest nation.

The election "without any doubt lacks legitimacy and we categorically refuse to recognize this process," Falcon told supporters minutes before the results were announced, vowing to fight on instead of joining a growing list of beleaguered anti-government politicians who've fled into exile of late.

The disputed victory is likely to heighten international pressure on Maduro. Even as voting was taking place Sunday, a senior U.S. official said the Trump administration might press ahead on threats of imposing crippling oil sanctions and Secretary of State Mike Pompeo warned "sham elections change nothing."

The MUD opposition coalition has won support from the United States, the European Union and 14 countries of the Lima Group who called for the vote to be postponed.

Falcon was joined in his demand for a new election by third-place finisher Javier Bertucci, who won around 11 percent of the vote. Bertucci, a TV evangelist who handed out soup at his campaign rallies, stopped short of challenging the results, partly blaming what he called a mistaken opposition boycott.

But he said he nonetheless favors a new election soon and urged Maduro to do the courageous thing and desist from running. If Maduro presses forward, he warned, Venezuela will explode before his new six-year term is scheduled to begin in January.

A social crisis years in the making has worsened as Venezuela's oil production — the source of almost all of its foreign income — has collapsed to the lowest level in decades and financial sanctions by the Trump administration has made it impossible for the government to renegotiate its debts. More than 1 million people have fled the country in the past two years and 14,000 percent inflation has crushed the minimum wage to less than $2 a month.

Both of Maduro's opponents accused electoral authorities of being blind to blatant violations before the vote and on election day. Falcon said that at 86 percent of voting centers ruling party activists set up so-called "Red Points" where they scanned on cellphones QR codes on government-issued "Fatherland Cards."

Some poor cardholders in Caracas — there are 16.5 million nationwide — said they hoped Maduro would deliver on his campaign promise of a "prize" to those who demonstrated their loyalty. Maduro accused his opponents of trying to "demonize" a program intended to address the social crisis and not assert political control.

National Electoral Council President Tibisay Lucena acknowledged a handful of complaints, but insisted they were minor compared to past elections.

"The people of Venezuela have made their pronouncement and we ask everyone, nationally and international, to respect the results," she said.

Voting centers appeared largely empty in opposition areas across Venezuela and were even lackluster in government strongholds. Turnout in the previous three presidential elections averaged 79 percent.

Opinion polls say the overwhelming majority of Venezuelans distrust the electoral council. Turnout figures in last year's elections for a constitutional assembly, which the opposition also boycotted, were inflated by at least 1 million votes, according to the company that provided technology for Venezuela's electronic voting machines for more than a decade.

But despite concerns of fraud, some government critics nonetheless questioned the wisdom of not participating in an election that looked to be its best chance in years to defeat Chavismo.

"If you're sick and the doctor gives you few days to live, you don't lie in bed waiting to die. You seek treatment," said Nayra Martinez, a city employee in the wealthy Caracas district of Chacao who decided to buck her party's call to abstain. "That's what we need to do with our country. Venezuela is very sick and we the people are the medicine."

Presidential elections are traditionally held in December, but they were moved up this year by the country's all-powerful and pro-government Constituent Assembly, catching the divided and weakened opposition off-guard.

In addition to electing a president, Venezuelans also voted for members of state and municipal legislative councils.