Texas sticks to its guns after yet another school shooting 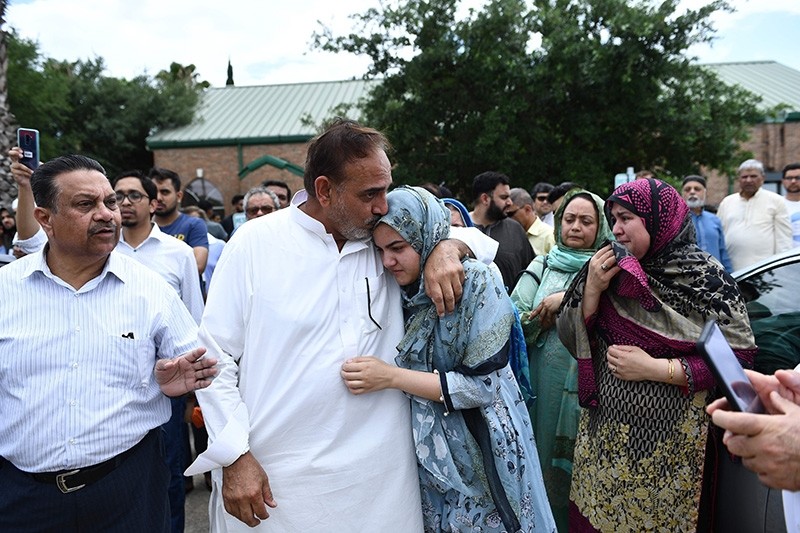 Nasir Shenwari (C), holding daughter Aunza grieve as the casket of Santa Fe High School shooting victim Sabika Sheikh, 17, leaves after a funeral service in Stafford, Texas, on May, 20, 2018. (AFP Photo)
by Daily Sabah with Agencies May 21, 2018 12:00 am

As the United States – and the family of one Pakistani exchange student – mourn in the wake of the country's fourth biggest school shooting, Texas officials have blamed a litany of social ailments and lack of security, but carefully protected gun ownership.

Ten people were killed and 10 others wounded Friday when a high school student opened fire on his classmates in the southeast Texas town of Santa Fe.

After Florida suffered a massive school shooting in February, the gun control debate seemed to gain traction, with young survivors of the Parkland shooting leading the way. But the latest shooting seems to have shifted the debate from banning big guns to hardening schools.

On Sunday, Texas Lt. Gov. Dan Patrick said "Everything ought to be on the table" in the discussion on how to protect students from gun violence, but he told gun owners to leave their weapons at home.

Patrick began by listing violent video games, the removal of religion from schools, abortions and broken families as key causes of the string of shootings.

A self-proclaimed gun owner, he told other owners "Your guns ought to be safe at home," except for teachers, who he said should be bringing their weapons with them into the classroom.

One in three Texans owns a gun. Texas is home to the largest stock of registered weapons of any U.S. state, owning 588,696 in 2017, according to Statista. California trails behind in second place with 344,622, nearly matched by Florida with 343,288.

On Friday, 17-year-old Dimitrios Pagourtzis opened fire on an art lab with a shotgun and 0.38 caliber handgun shortly after the first bell Friday morning. Ten people were killed, most of them students.

One of the victims of the shootings was a 17-year-old Pakistani exchange student, whose father said her dream was to serve her country as a civil servant or diplomat.

"Sabika's case should become an example to change the gun laws," her father, Aziz Sheikh told Reuters, speaking by telephone from the family home in the city of Karachi.

Aziz Sheikh said the danger of a school shooting had not crossed his mind when he sent Sabika to study in the United States for a year.

Sabika was part of the YES exchange program funded by the U.S. State Department, which provides scholarships for students from countries with significant Muslim populations to spend an academic year in the United States.

About 1,000 people, many with Pakistani roots, gathered Sunday at an Islamic center in Stafford to offer prayers at Sheikh's funeral.

Sheikh had been due to return home in mere weeks, in time for Eid al-Fitr, the holiday marking the end of the holy Muslim month of Ramadan.

"It's a shock, it's so sad," said real estate agent Ike Samad, 67, who was born in Pakistan but has lived in Texas most of his adult life and raised his children as Americans.

"I came here just like her, as a student," he recalled.

Samad also addressed the painful irony that a young woman from a country that many Americans associated with the war on terror in the aftermath of the Sept. 11, 2001, attacks on New York and Washington was killed in a country that millions around the world perceive as safe and free.

The attacks were a "tragedy, and tragedy sometimes teaches you life," he said. "But it also revisits, and in this case very close to here."

The motive of the shooter, Pagourtzis, remains unknown but authorities discovered he had studied previous mass shootings. Classmates described him as a quiet loner who played on the football team, and one victim's mother said her daughter had recently rejected advances from him.

Many of the aspects of the attack mirrored one of the worst school shootings in American history: the massacre at Columbine High School in April 1999, in which two teenage boys with weapons hidden under trenchcoats killed 12 students and one teacher.

Columbine touched off a national debate over gun control laws, gun culture, and even violence in video games. That debate still rages after the Sandy Hook Elementary School shooting in Newtown, Connecticut, in 2012 where 20 student and six adults were killed. And also in the Parkland, Florida, shooting in February where 14 students and three adults were gunned down.