Maduro expels top US diplomat from Venezuela, accuses him of conspiring against government 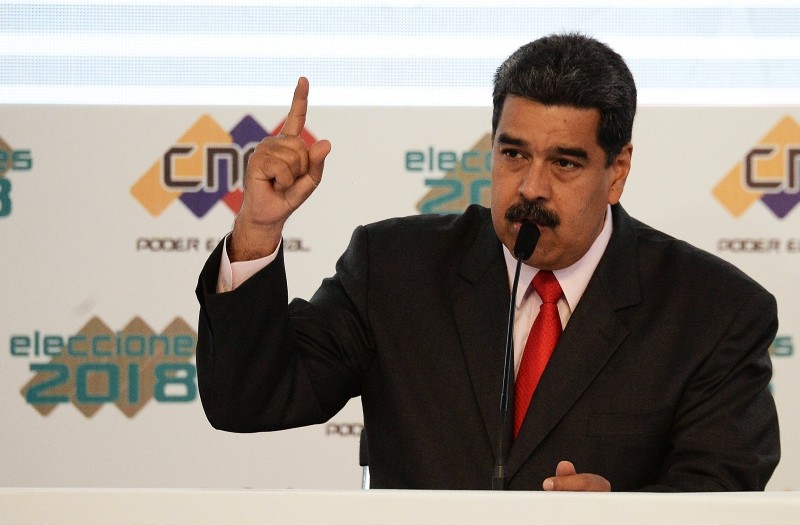 Venezuelan President Nicolas Maduro speaks at the National Electoral Council (CNE) headquarters in Caracas, during the act in which he was proclaimed as re-elected President for the term 2019-2025, on May 22, 2018. (AFP Photo)
by Compiled from Wire Services May 22, 2018 12:00 am

President Nicolas Maduro on Tuesday said he was expelling the top U.S. diplomat in Venezuela and his deputy for allegedly conspiring against his government and trying to sabotage the country's recent presidential election.

"The empire doesn't dominate us here," Maduro said in a televised address, giving charge d'affaires Todd Robinson and his deputy Brian Naranjo 48 hours to leave the country. "We've had enough of your conspiring."

Tensions between the U.S. and Venezuela have mounted following Maduro's victory in presidential elections on Sunday, a vote the White House has branded a "sham."

Maduro said in his speech that Robinson and Naranjo, whom he referred to as the head of the CIA in Venezuela, both personally pressured several anti-government presidential aspirants not to compete in the race. Most opposition parties decided to boycott after officials blocked their most popular leaders from competing.

Maduro also accused the Trump administration, which slapped new sanctions on his government Monday, of seeking to escalate "aggressions" against the Venezuelan people.

"The dominant and decisive reason why the opposition progressively withdrew from the elections was the decision by the extremist U.S. government to not validate or legitimize a presidential election that they knew fully was going to be won in any scenario by the candidate of Nicolas Maduro," the president said.

The U.S. State Department later rejected the accusations by Maduro that two top U.S. diplomats were engaged in what he called a "military conspiracy" or had been meddling in the country's economic and political issues.

A State Department official told AFP that Washington had "not received notification from the Venezuelan government through diplomatic channels," but that if the expulsion goes ahead, "the United States may take appropriate reciprocal action."

The United States refused to recognize Maduro's re-election on Sunday and imposed new sanctions over the controversial vote.

Robinson is a career diplomat who previously served as ambassador to Guatemala. Venezuela and the U.S. haven't exchanged ambassadors since 2010.

There was no immediate reaction from Robinson or the U.S. Embassy in Caracas.

In his long diplomatic career, Robinson has worked in Colombia, Bolivia, El Salvador and the Dominican Republic. He earned a reputation for speaking out as ambassador to Guatemala and several times faced calls for his expulsion.

He's been similarly provocative during his short stay in Caracas.

Days after landing in Caracas last December, he posed for pictures next to a statue of independence hero Simon Bolivar in a pro-government plaza and called Maduro's constitutional assembly "illegitimate."

He's also made several forceful calls for the release of U.S. citizen Joshua Holt, who has been jailed for more than two years, without a trial, on weapons charges. Last week, he rushed with cameras in tow to the foreign ministry to demand information about Holt after the Utah native appeared in a video from jail saying his life had been threatened during a prison riot.

Robinson said nobody in the Venezuelan government would met with him, but socialist party boss Diosdado Cabello denied the snub, accusing him of staging a "show".

Venezuela and the U.S. haven't exchanged ambassadors since 2010, so Robinson, while preserving his ambassadorial rank, was serving as chief of mission at the hilltop embassy in Caracas. Naranjo, his deputy, is one of the most senior State Department officials working on Venezuela, having served previously in Caracas when the late Hugo Chavez first ran for president in 1998.