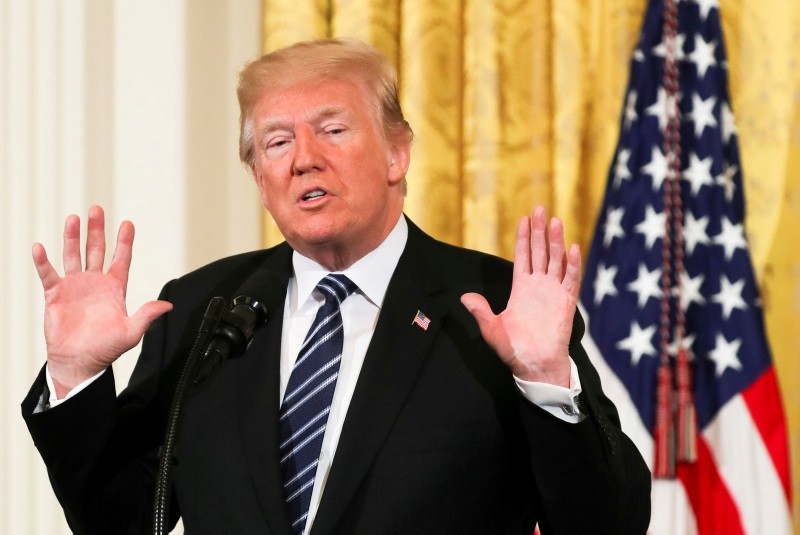 U.S. President Donald Trump gestures as he delivers remarks during the Prison Reform Summit at the White House in Washington, DC, U.S., May 18, 2018. (REUTERS Photo)
by Compiled from Wire Services
May 22, 2018 12:00 am

The new economic penalties prevent U.S. nationals and individuals residing in the U.S. from buying debt owed to the government of Venezuela, or engaging in financial transactions involving any entity in which the Venezuelan government owns more than a 50-percent share.

The financial response to the vote was accompanied by diplomatic efforts to further isolate Caracas.

Maduro, 55, won some 5.8 million votes, or 68 percent of the total, said Tibisay Lucena, head of the National Electoral Council.

Falcon rejected the result, calling it "illegitimate" on social media.

U.S. Vice President Mike Pence rejected the poll, calling it a "sham" that was "neither free nor fair."

"The illegitimate result of this fake process is a further blow to the proud democratic tradition of Venezuela," he said in a statement. "The United States will not sit idly by as Venezuela crumbles and the misery of their brave people continues."

Maduro first took office in 2013 after his predecessor Hugo Chavez died, and is set to govern Venezuela for another six-year term, from January 2019 to 2025.

Venezuela is already deep in the worst economic crisis of its history, with its people enduring food and medicine shortages that have sparked violent unrest and a mass exodus by hundreds of thousands of people.

But the vote was marred by a 52 percent abstention rate -- a historic high -- following a boycott called by the Democratic Unity Roundtable (MUD) opposition coalition, which slammed the ballot as a "farce."

Even before it took place, Canada, the European Union, the United States and a dozen Latin American countries said they would not recognize the results.