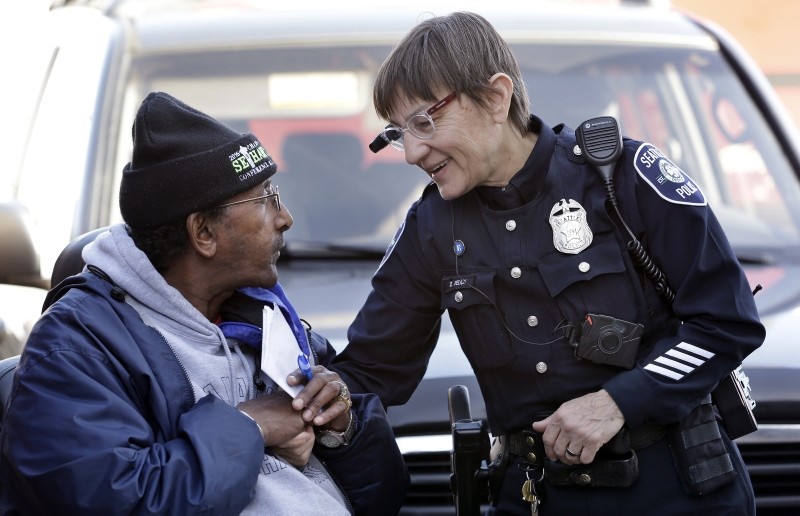 In this March 12, 2015, file photo, Seattle police officer Debra Pelich, right, wears a video camera on her eyeglasses as she talks with Alex Legesse before a small community gathering in Seattle. (AP Photo)
by French Press Agency - AFP May 22, 2018 12:00 am

The organizations sent a letter to Amazon after an ACLU investigation found Amazon had been working with a number of U.S. law enforcement agencies to deploy its artificial intelligence-powered Rekognition service.

"Rekognition marketing materials read like a user manual for authoritarian surveillance," said Nicole Ozer of the ACLU of California.

"Once a dangerous surveillance system like this is turned against the public, the harm can't be undone."

A letter to Amazon chief Jeff Bezos was signed by groups including the Electronic Frontier Foundation, Data for Black Lives, Freedom of the Press Foundation and Human Rights Watch.

"Amazon Rekognition is primed for abuse in the hands of governments," the letter said.

"This product poses a grave threat to communities, including people of color and immigrants, and to the trust and respect Amazon has worked to build."

Amazon is one of many companies in the U.S. and elsewhere which deploy facial recognition for security and law enforcement.

Some research has indicated that such programs can be error-prone, particularly when identifying people of color, and activists argue these systems can build up large databases of biometric information which can be subject to abuse.

In China, authorities have created a digital surveillance system able to use a variety of biometric data -- from photos and iris scans to fingerprints -- to keep close tabs on the movements of the entire population, and uses it to publicly identify lawbreakers and jaywalkers.

The ACLU released documents showing correspondence with police departments in Florida, Arizona and other states on Rekognition, which is a service of Amazon Web Services.

The U.S. activist groups say a large deployment by Amazon, which is one of the leaders in artificial intelligence, could lead to broad surveillance of the US population.

"People should be free to walk down the street without being watched by the government," the letter said.

"Facial recognition in American communities threatens this freedom. In overpoliced communities of color, it could effectively eliminate it. The federal government could use this facial recognition technology to continuously track immigrants as they embark on new lives."

Amazon did not immediately respond to an AFP request for comment on the letter.