'You're on a killing spree': Students slam US envoy over Israeli violence during speech at Texas university 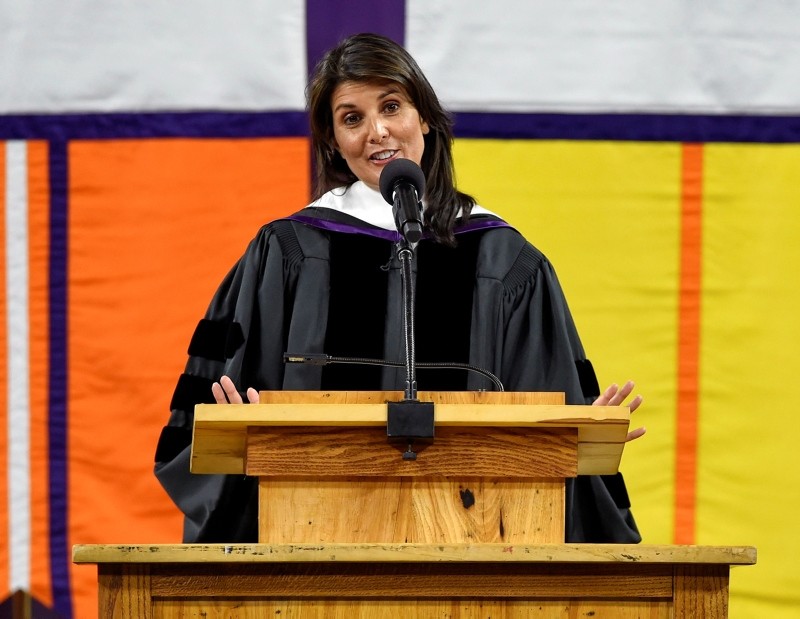 When U.S. ambassador to the U.N. Nikki Haley spoke at a university in Texas, she was unexpectedly confronted by students about her positions toward Palestinians and the violence in Gaza.

In her speech Tuesday at the University of Houston, Haley covered an array of topics, including her country's foreign policy, global challenges and the recent shootings in Texas, where 10 students were killed.

"Nikki Haley, the blood is on your hands! You continue to sign off on the genocide of a native people. You are an accomplice to terrorists and colonizers!" a student shouted, startling the diplomat, who is known for her strong support of Israel.

Dozens of protesters throughout the auditorium followed suit by standing up with Palestinian flags.

They chanted "Nikki, Nikki can't you see? You are on a killing spree!" and "Nikki Haley you can't hide, you signed off on genocide!"

They were later escorted out of the auditorium by security personnel.

"Nikki Haley has been complicit in the genocide of Palestinians and she walked out on the representative from Palestine at the U.N.," Mariam Zaidi, a student from Texas A&M University who participated in the protest, told Anadolu Agency Wednesday.

"We did not want her to feel as if her actions have gone unnoticed, and we used our freedom of speech to protest against her wrongdoings," Zaidi added.

Students who protested Haley also released a statement saying that Haley's "spiteful actions" before and during her time as envoy to the U.N. demonstrate her blatant discrimination against Palestinians and blind eye to injustices around the world.

Accusing Haley of blocking the investigation of Israel's massacre in Gaza, the students also emphasized Haley's longtime commitment to silencing the voices of those who have spoken out against Israel's atrocious acts against Palestinians.

At least 65 Palestinians were martyred by Israeli gunfire during protests in eastern Gaza on May 14. Thousands more were injured.

The demonstration coincided with Israel's 70th anniversary -- an event Palestinians refer to as Nabka or "the Catastrophe" -- and the relocation of the U.S. embassy in Israel to Jerusalem.

Since the Gaza rallies began on March 30, more than 110 Palestinian demonstrators have been martyred by Israeli army gunfire.