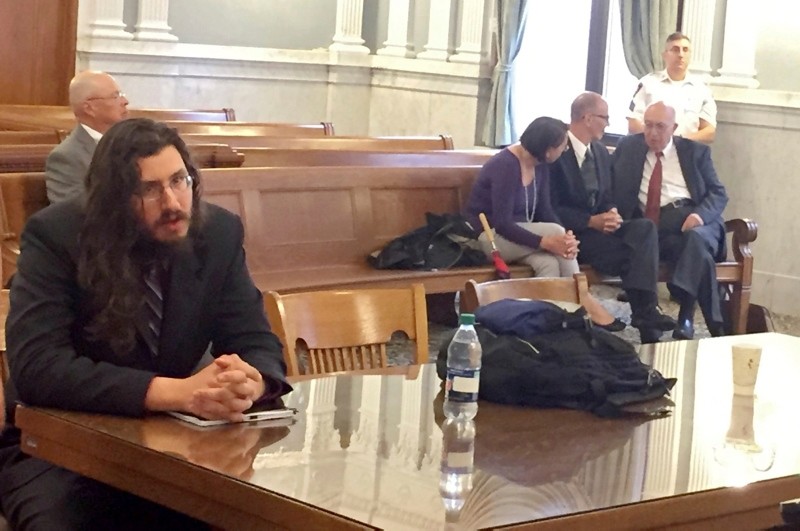 Michael Rotondo, left, sits during an eviction proceeding in Syracuse, N.Y., brought by his parents, Mark and Christina, of Camillus. (The Syracuse Newspapers via AP)
by Daily Sabah with Agencies
May 25, 2018 12:00 am

30-year-old who made headlines after being evicted from his parents' house said on Friday that he can't afford moving boxes and that would be a problem.

"I need to start packing my boxes so I can move," Rotondo told Syracuse.com. "But I have to pay for the boxes, which might be a problem."

A court order ruled that Michael Rotondo must move out from his parents' home in Camillus by noon on June 1 after he ignored five notices between February and April requesting he leave their home.

"After a discussion with your mother, we have decided you must leave this house immediately," the couple wrote in one of the letters. "You have 14 days to vacate. You will not be allowed to return."

In another note, the parents offered him $1,100 to help look for a job and an apartment and shared advice on how to manage on his own.

"There are jobs available even for those with a poor work history like you. Get one — you have to work!" one of the letters read. In the second-to-last letter, on March 5, the parents warned they would take actions to make sure he left the home.

Rotondo had asked for at least 30 days to leave, arguing for a full six months during court arguments on Tuesday — which the judge called "outrageous."

The judge said Rotondo's mother was entitled to remove him right away, but wrote that she requested he be given until June 1 to vacate.

Rotondo is far from the only older child still living at home in the US: according to a Pew Research Center study, nearly a third of 18 to 34-year-olds lived with their parents in 2016.