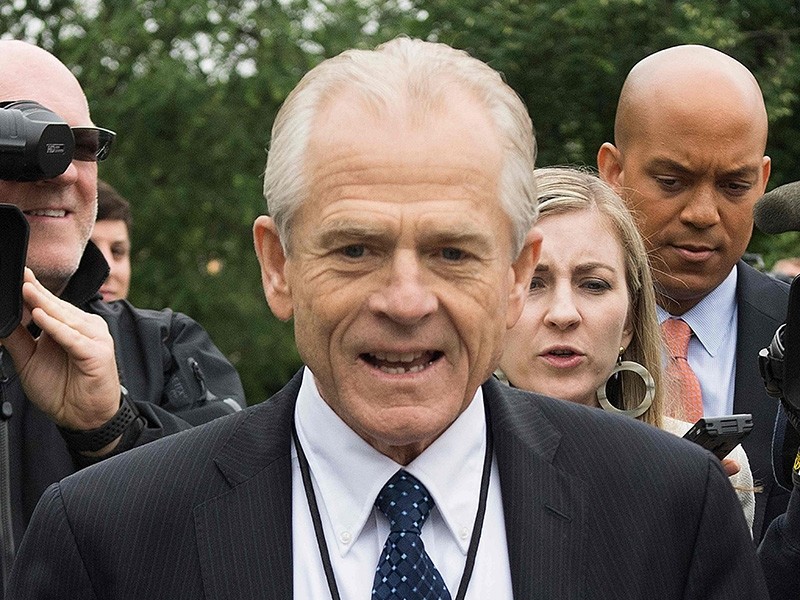 White House Director of Trade Policy Peter Navarro dodges the press after speaking on Fox News at the White House in Washington, DC, on June 4, 2018. (AFP Photo)
by Daily Sabah Jun 11, 2018 12:00 am

According to the U.S. White House, there's a special place in hell for anyone who engages in "bad faith diplomacy" with President Donald Trump, and this week that spot is reserved for Canadian Prime Minister Justin Trudeau.

"There's a special place in hell for any foreign leader that engages in bad-faith diplomacy with President Donald J Trump and then tries to stab him in the back on the way out the door," White House National Trade Council Director Peter Navarro told Fox News on Sunday, responding to a question about Trudeau's comments on last weekend's Group of Seven summit.

Trudeau promised retaliatory measures against U.S. tariffs on Saturday evening after the summit, a move Navarro called "nothing short of an attack on our political system."

When Fox News Sunday host Chris Wallace asked Navarro whether his sentiments came from the president, he said "those are my words, but they are the sentiment that were on Air Force One."

Trump on Saturday skipped out early on the G-7 meeting after rejecting the summit's statement of shared values. He vented his sentiments on Twitter just minutes after Trudeau's announcement with a scathing invective calling his host "very dishonest & weak."

"PM Justin Trudeau of Canada acted so meek and mild during our @G7 meetings only to give a news conference after I left saying that, 'US Tariffs were kind of insulting,'" Trump tweeted.

Trump has framed the topic of trade agreements as an issue of national security, a stance backed by the advisers he has stocked in his White House, including the new National Security Advisor John Bolton. Canada is joined by other major economies, including Germany and France, who have found the idea "insulting" that trade agreements between allies could be called security matters.

Trudeau said at a news conference Saturday that he was disappointed in the Trump administration's action to impose tariffs on aluminum and steel imports from Canada, Mexico and the European Union.

The prime minister said although retaliation "is not something I relish doing," he would not hesitate to do so because "I will always protect Canadian workers and Canadian interests."

"Canadians are polite and reasonable, but we will not be pushed around," Trudeau said.

Navarro slammed Trudeau's comment as "one of the worst political miscalculations by a Canadian leader in modern Canadian history."

"Why should I, as President of the United States, allow countries to continue to make Massive Trade Surpluses, as they have for decades, while our Farmers, Workers & Taxpayers have such a big and unfair price to pay? Not fair to the PEOPLE of America!" he tweeted.

"Fair Trade is now to be called Fool Trade if it is not Reciprocal," Trump added.

Trudeau hasn't responded to the attacks, but tweeted Sunday that the G-7 had made significant contributions to economies and societies around the globe.

"The historic and important agreement we all reached at #G7Charlevoix will help make our economies stronger & people more prosperous, protect our democracies, safeguard our environment and protect women & girls' rights around the world. That's what matters," Trudeau tweeted.

In a matter of hours and series of texts, the U.S. has rushed into a diplomatic crisis with its closest allies, adding anxiety to an already tense global economy.

"With one tweet, an unsettling amount of trust can be very quickly destroyed," German Foreign Minister Heiko Maas tweeted Sunday. "It is even more important that Europe stands together and even more aggressively represents its interests. #EuropeUnited is the answer to #AmericaFirst."

"International cooperation cannot depend on being angry and on sound bites. Let's be serious," a statement by the French government said Sunday.