US plunges toward diplomatic crisis with Canada, Europe after G-7 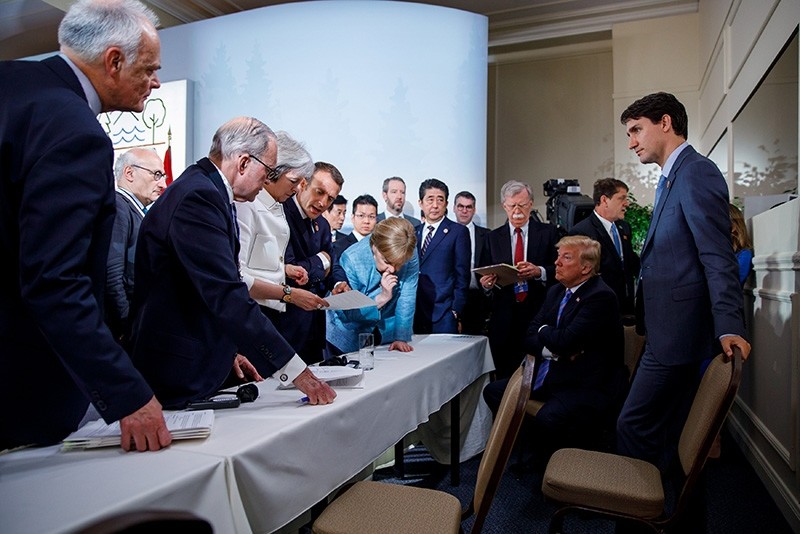 The United States and Canada swung sharply toward a diplomatic and trade crisis on Sunday as top White House advisers lashed out at Canadian Prime Minister Justin Trudeau in the wake of U.S. President Donald Trump's early G-7 departure and rejection of the summit's statement of shared values.

The spat drew in Germany and France, who sharply criticized Trump's decision to abruptly withdraw his support for a Group of Seven communique hammered out at a Canadian summit on Saturday, accusing him of destroying trust and acting inconsistently.

On Monday, Trump lashed out at U.S. allies in another Twitter rant, tweeting: "Fair Trade is now to be called Fool Trade if it is not Reciprocal."

Trudeau then "acts hurt when called out!" Trump wrote. "Why should I, as President of the United States, allow countries to continue to make Massive Trade Surpluses, as they have for decades, while our Farmers, Workers & Taxpayers have such a big and unfair price to pay? Not fair to the PEOPLE of America!"

Adding to the U.S. trade deficit is "the fact that the U.S. pays close to the entire cost of NATO-protecting many of these same countries that rip us off on Trade (they pay only a fraction of the cost-and laugh!)."

He said the European Union "should pay much more for Military!"

According to Trump, Germany "pays 1% (slowly) of GDP towards NATO, while we pay 4% of a MUCH larger GDP. Does anybody believe that makes sense? We protect Europe (which is good) at great financial loss, and then get unfairly clobbered on Trade. Change is coming!"

He concluded: "Sorry, we cannot let our friends, or enemies, take advantage of us on Trade anymore. We must put the American worker first!"

Trade was at the center of the discord that marred the G-7 meetings in La Malbaie, Canada, as Trump exploded on Twitter at Trudeau, after the host had vowed retaliation for U.S. tariffs on steel and aluminum.

French President Emmanuel Macron and his fellow European leaders would stick by the G-7's joint communique, signed Saturday in Quebec, according to a statement on Sunday in Paris.

Trump's retraction of the closing document was "incoherent and inconsistent," the Elysee Palace said.

"International cooperation cannot depend on being angry and on sound bites. Let's be serious," the French statement said.

The G-7 communique, initially including the United States, voiced a commitment to oppose protectionism and uphold the "rules-based international trading system."

In a concession to Trump, the document called for modernizing the World Trade Organization "to make it more fair as soon as possible."

The meeting saw other leaders broaching a "G6+1" format, with Canada, Britain, France, Germany, Italy and Japan in consensus on some global issues without the U.S.

The right-wing populist Trump, a political novice elected on an "America First" agenda, has withdrawn the U.S. from the Paris climate deal while ratcheting up global trade tensions.

"With one tweet, an unsettling amount of trust can be very quickly destroyed," German Foreign Minister Heiko Maas tweeted Sunday. "It is even more important that Europe stands together and even more aggressively represents its interests. #EuropeUnited is the answer to #AmericaFirst."

German Chancellor Angela Merkel also took aim at Trump's decision to pull out of the G-7's joint communique over Twitter, calling "sobering and a bit depressing" in an interview on Sunday with broadcaster ARD.

She said Trump's decision strengthened her resolve to fight for a strong, unified European Union, saying that Europe must take the future into its own hands, if possible with Japan.

Merkel admitted that Trump's stance does not make things easier but said that she intends to continue upholding U.S.-German ties and having talks with him, including at the NATO summit in July in Brussels.

"He really kind of stabbed us in the back," Kudlow told U.S. broadcaster CNN.

Trump had been "very close" to a trade deal with Canada before Trudeau's "political stunt for domestic consumption," Kudlow said.

Asked if the reaction to Trudeau was motivated by Trump's scheduled Tuesday meeting with Kim, Kudlow said "of course it was, in large part."

"Kim must not see American weakness," he said.

Late Saturday, Trudeau said that he had told Trump it was "insulting" for Washington to use national security as a justification for tariffs on metals from Canada, a NATO member that has fought side by side with the U.S., and promised "retaliatory measures" starting July 1 on US products.

"Canadians are polite and reasonable, but we will not be pushed around," Trudeau said.

White House trade adviser Peter Navarro said that retaliatory tariffs were "nothing short of an attack on our political system," accusing Trudeau of trying to raise already high Canadian tariffs.

"There's a special place in hell for any foreign leader that engages in bad-faith diplomacy with President Donald J Trump and then tries to stab him in the back on the way out the door," Navarro told Fox News.

Canadian Foreign Minister Chrystia Freeland responded to the White House comments by saying that Canada will retaliate to U.S. tariffs in a measured and reciprocal way and that Canada will always be willing to talk.

Freeland told reporters that she had met with U.S. Trade Representative Robert Lighthizer on Friday and would speak to him later on Sunday, adding that she believes a deal to renew the North American Free Trade Agreement is still possible.

Some 75 percent of Canadian exports go to the United States, making Canada uniquely vulnerable to a U.S. trade war.

Having left the G-7 summit in Canada early, Trump's announcement on Twitter that he was backing out of the joint communique torpedoed what appeared to be a fragile consensus on a trade dispute between Washington and its top allies.

"The G-7 was a forum for friends – democracies with the same value system – to discuss issues of common interest. Now there is a question mark over that. But it did not start with this G-7, but with the election of Donald Trump," said a European official.

"The world as we know it, namely the U.S.-led rules-based multilateralism, is now in serious danger of unraveling, as illustrated at the G-7 meeting," said Erik Nielsen, chief economist at Unicredit Bank.