Trump says US media is America's 'biggest enemy' after summit 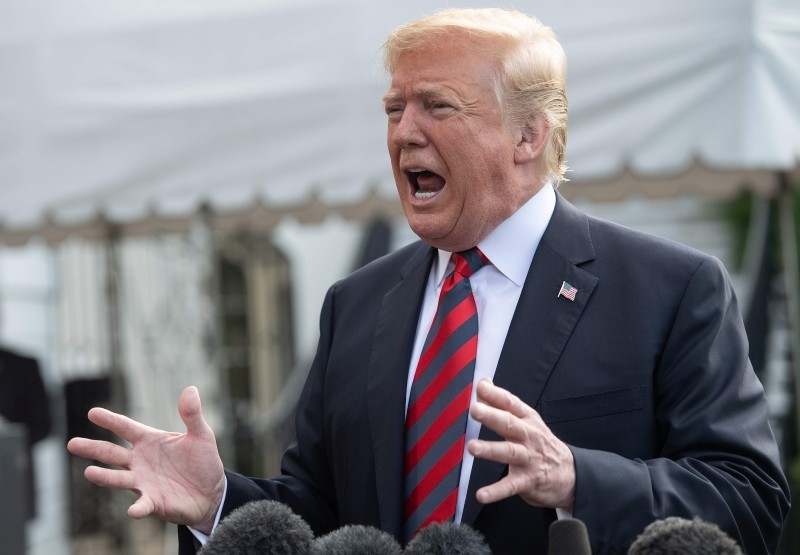 In this file photo taken on June 8, 2018 US President Donald Trump speaks to the press before departing the White House for the G7 summit in Washington, DC. (AFP Photo)
by Associated Press Jun 13, 2018 12:00 am

The president's tweet, delivered a few hours after Air Force One touched down outside Washington, was reminiscent of his February 2017 Twitter rebuke in which he called several leading news outlets "the enemy of the American people."

Trump has sought to portray his unprecedented meeting with Kim as a significant accomplishment that has made the world less vulnerable to the North's nuclear arsenal. Critics say that his agreement with the North lacks specific restraints on Kim's government and that he offered to end joint military exercises with South Korea with little in return.

The president tweeted after returning from his Singapore summit that "the Fake News, especially NBC and CNN," are "fighting hard to downplay the deal with North Korea." He added: "500 days ago they would have 'begged' for this deal-looked like war would break out."

"Our Country's biggest enemy is the Fake News so easily promulgated by fools!" Trump tweeted.

The president also asserted that after his initial round of talks with Kim, there is "no longer a Nuclear Threat from North Korea." Trump's claim is dubious given that independent experts estimate Pyongyang has enough fissile material for 20 to 60 bombs.

The tweet followed a New York Times story on the Trump administration's lack of scientific expertise, the president's questioning of the honesty of the American media at an international summit in Canada and his dismissal of diplomatic expertise in favor of using a "touch" and "feel" approach in his talks with Kim.

Trump has bristled against questions over his decision to meet with Kim, whose country is estimated to have 80,000 to 120,000 political prisoners. The president has dubbed his detractors "haters & losers."

"It's a mistake to see attacks on the media as separate from those things," said Jay Rosen, a New York University journalism professor. "It's the erosion of the common world of fact. If we can't agree on what the facts are, if there are no facts because they are in endless dispute, there is no accountability."

Rosen noted that international summits were often venues for the U.S. president and American journalists to insist on joint news conferences with autocratic leaders or strongmen and their accompanying press corps, a form of soft diplomacy that demonstrated America's commitment to democratic institutions such as freedom of the press.

While Trump held a news conference at the G-7 summit in Quebec last week, he told reporters during one exchange that he "came up with the term fake news" because many journalists who cover him are "very dishonest." In response to a journalist representing CNN, Trump criticized the premise of the reporter's question and then criticized "fake news CNN" as "the worst."

"Anybody who can exert a factual check on the president, saying 'Wait a minute, that's not what happened,' is to be dismissed, attacked, delegitimized, pushed aside and turned into a hate object," Rosen said.